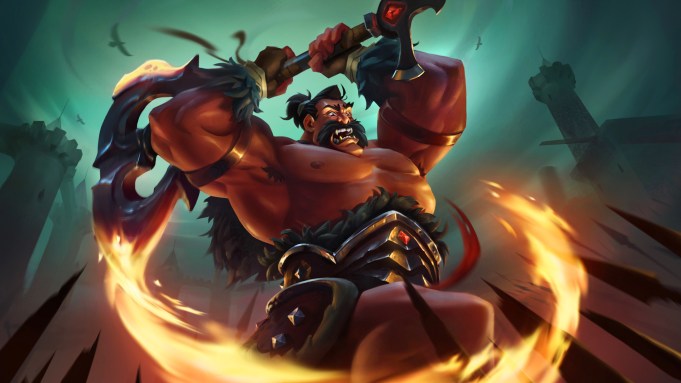 “Pagan Online” subverts assumptions on just about every level.

It’s a high-fantasy action role-playing game owned and being developed with Wargaming, the Belarusian video game company not just named for military wargaming, but nearly solely focused on it.

Where “World of Tanks,” “World of Warplanes,” and “World of Warships” are highly realistic, enormously successful strategic military games, “Pagan Online” is a fantasy title inspired by Slavic mythology.

More about skill than a calculus of combat

Even the name, so generic it’s forgettable, belies the game’s brilliance. At first play “Pagan Online” strikes one as a game that replicates the look and rich storytelling of clicky action role-playing games like “Diablo,” and marries that to the skill of a shooter.

Instead of relying on the hidden arithmetic of gear statistics and character level, of secret rolls and calculus of combat, “Pagan Online” looks to the player’s skill, their ability to maneuver with keyboard while attacking with mouse. Its play has more in common with classic arcade title “Berserk,” then it does the digitization of “Dungeons and Dragons.”

Perhaps most importantly, though, is what this game means for Wargaming the company. It’s the second major investment in a different direction for a company that was one of the first to spot and embrace the power and importance of free-to-play.

With “Pagon Online,” Wargaming is reacting to what it sees as two major shifts in the market: The return of the premium paid game, and the continued expansion of online play.

“For us this is a premium product for the exact same reasons. There’s a free-to-play backlash going on. Looking at this audience and the game, free-to-play isn’t the right move. We know that and it’s important to be incredibly transparent. So when this comes to market it will be a competitive price, buy-to-play. You won’t have to worry about crappy little micro-transactions.”

“It’s not a strange thing we came up with this one,” Banjesevic said. Based in Serbia, Mad Head Games decided to infuse the title with the “stories our grandmothers told us when we were kids. The sort of stories that Western audiences may not be aware of.”

The game takes place in a world where the gods are missing, in the opening sequence of “Pagan Online,” players are told that there is a pantheon of Slavic gods and that without them there is no balance. Without balance, the narrator says, there is no life.

The player is tasked early on with discovering what happened to the gods.

It’s the sort of story — set in non-traditional mythology — that may have in the past given publishers pause, but Banjesevic said that the success of other games from the area have made it easier for companies like Mad Head Games to focus on their own culture when making titles.

“‘The Witcher’ paved the way for Slavic countries,” he said.

Beucler said the game is designed to celebrate the differences the developer brings to the genre with a different backstory, different gameplay, and different types of mechanics.

The game has a “family of heroes,” each with their own sort of playstyle. There are eight different hero types.

“How do you want to play?” Beucler said. “Crush skulls? Cleave people? With a whip? Up close? With ranged attacks? Slow and huge or tiny and fast? With familiar pets?”

Each of the characters has pre-defined skills and a specific type of gameplay, he said. While the characters are pre-created, they can be customized with skins, pets, color pallets, emotes, poses and banners.

As with games like “Diablo,” a big part of “Pagan Online” is loot leveling up, getting better gear and having those really cool skillshot moments.

He said that the game’s three major pillars are: Battle, crafting, and the progression of your family of heroes. That final loop is about playing to unlock more and more of the game’s playable characters.

While the game does have a story, its play is session-based, broken up into short solo and cooperative runs of five to 30 minutes a pop. But that doesn’t mean there isn’t a lot to dig into as a player. All said, the game will offer about 35 hours of play when it ships, Beucler said.

The game is broken into major acts which have quests, which in turn have a slew of these smaller missions. All of this is spread across the game’s different biomes — desert, swamp, ice, and forest. While the game’s maps remain unchanged, the encounters within those maps are all procedurally generates.

When the game opens, players are presented with three heroes and asked to choose one of them. From that point on, players unlock the rest of the heroes through play.

“The experience is very different from ‘Diablo,’” Banjesevic said. “‘Diablo’ is all about numbers and gear. Our game is not just about gear check it’s about skill check. It’s about boosting hero stats, gaining some loot to alter gameplay, unlocking new heroes and new ways to play.”

Mad Head Games
“Pagan Online” is the second game being created through Wargaming’s relatively recent third-party publishing group, Beucler said. The first was a reimagining of turn-based strategy game classic “Master of Orion.” That title, developed by NGD Studios was released in 2016. After its release, the company’s third-party group went on the hunt for its next project.

“We looked at hundreds of games,” Beucler said. “We ran into this product after it was forwarded to us by a guy at Epic Games about two years ago.

“The audience is looking for something that doesn’t feel like a scam.”

The team loved the look of it and soon signed a deal with Mad Head Games, a Serbian studio of about 150 founded in 2011, about a year ago to have them continue to develop the game, but sell the IP to Wargaming.

Before making that decision, though, Beucler said his team did their homework, studying up on what the action role-playing game market looks like, how it’s served and what’s good and bad about the games already out there.

What they found was a massive audience that the team at Wargaming felt was underserved. Beucler said the felt their instincts were right when they watched BlizzCon last year and saw the unveiling of the next Diablo game, something they were worried would undermine “Pagan Online”

He said the team was expecting “Diablo 4” to be announced, but instead, it was a mobile game.

“Diablo Immortal,” which was announced to largely negative reaction at BlizzCon, is being co-developed by Blizzard and NetEase. While pricing hasn’t been announced, it seems to borrow the look of a NetEase developed free-to-play game.

“The audience is looking for something that doesn’t feel like a scam,” he said. “Could we make ‘Pagan Online’ a free-to-play game? Yeah. Should we? No. I think the audience feels burned.”

Hands On
It’s not an easy thing to adapt to at first.

The muscle memory built around years of playing “Diablo” and clicking to move to points on a map, is hard to let go of. But after a few short sessions, the new controls started feeling not just more natural, but more rewarding.

In “Pagan Online” players use the W,A,S, and D keys to move their character around the map while using the mouse to aim attacks. The result is a game that feels slightly like a twin-stick shooter, though you’re using a mouse and keyboard instead of two joysticks.

To complicate matters more, the character I played and the gods he followed added a bit of duality to all of his moves.

“The character serves two gods,” Banjesevic said. “So every ability has a toggle.”

That means while in a battle, not only did I have to move around and aim with my mouse while selecting the spells and abilities I wanted to use, I also had to focus on toggling between the overarching god I was serving, which impacted what the spell did.

While that is unique to Lukian — a sort of wizard ranged character — each of the characters have very unique traits.

With Lukian it’s his ability to switch between lighting and sunfire spells, powered by his affinity to Perun, god of thunder, and Dabog, god of the sun.

Istok, on the other hand, is a tank whose power grows with every block he makes with his shield. Anya uses a whip as her main weapon and relies on her abilities to leech life from opponents granted to her as a blood ritualist. Kingewitch is powered by pure rage, which increases as he battles.

Because all of the game’s characters are so different from one another, they each have their own sorts of resources uses for their ability. So Anya collects corrupted blood, while Kingewitch increases his fury, and Lukian relies on mana.

The design of the characters is each so unique they completely change the way you play the game and your approach to enemies.

Blended together — aim to attack, keyboard movement, unique abilities, and the unusual, vastly different way you collect ability-empowering resources — these smart development choices result in a game that feels vastly different than many of the other titles in the genre, and yet familiar in some ways at its heart.

As with most games of this sort, weapons, armor and leveling are all key components of “Pagan Online.”

The characters can all be leveled up to 30, and then there is another, larger account-wide level which reflects your total time and experience with the game, Beucler said.

Gods and Tanks
“I don’t need to sell ‘Pagan’ to a bunch of tankers. I’m not going after them. I’m publishing a cool game from a cool developer.”

While it may seem like a strange shift for Wargaming to suddenly drop into the fantasy role-playing game market, that’s not how Beucler sees it.

“I’m more in the realm of a music producer who finds a cool album,” he said, explaining his role in the company.

In Beucler’s mind, what he and his small team of three do is focus on finding singular experiences that they think will be that one in 200 experience for players. That’s what publishing “Master of Orion” two years ago did for Wargaming, it opened the door to allow it to act as a third-party publisher for games that don’t necessarily involve machines of war. And to do that without it impacting Wargaming’s core business.

“‘Tanks’ was made by a tiny team who gave everything they could to get it to market. No one planned on the level of success it had.”

In terms of “Pagan’s” break from free-to-play, that doesn’t mean it will be a game that Wargaming releases and then moves on to the next thing.

Beucler said Wargaming has a lot of interest in the continuing support of the game, but not through microtransactions or even something like games as a service. Instead, he said, it would likely be something more akin to additive content, like packs sold post-launch to expand the game.

“There will be more content over time, really meaningful updates once a quarter, new characters, new content, new features, more storyline,” he said. Each massive update will be called a battle chapter.

A big element of the game’s future is tied to its name. “Pagan Online” launched as a title about a fantasy world once ruled by Slavic gods, but its goal is to be a game that tells the story of the world’s many pre-Christian gods.

“Pagan Online” will go into early access in April. The plan is to sell the Windows PC game via Steam and the Wargaming Game Center.