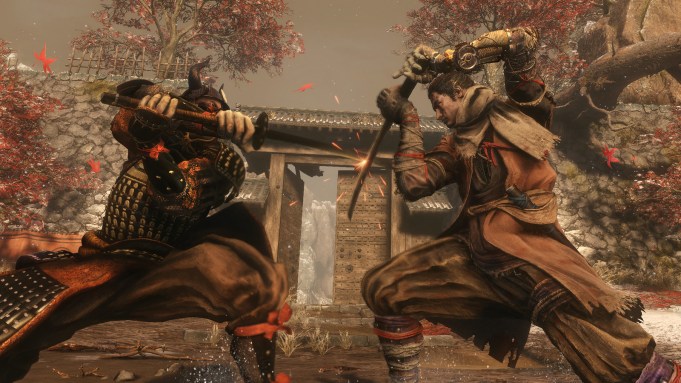 “Sekiro: Shadows Die Twice” draws its greatest influence from 90s classic action stealth game “Tenchu.” Developers even played around with the idea of making it an official part of the franchise, said From Software game director Hidetaka Miyazaki.

“A lot of influence came from ‘Tenchu,'” Miyazaki said. “We even pondered upon making ‘Sekiro: Shadows Die Twice’ a part of the ‘Tenchu’ series at first. Of course, after that we researched and referenced many other games as well; however, I think the largest influence was from ‘Tenchu.'”

The result is a game that on some level may feel like a “Souls” or “Bloodborne” game set in Japan, but that the studio feels is vastly different.

“As far as similarities go, the sense of accomplishment one feels after overcoming each challenge is an underlying theme present in ‘Demon’s Souls,’ ‘Dark Souls,’ ‘Bloodborne’ and ‘Sekiro: Shadows Die Twice’ alike. Also, in particular with ‘Bloodborne,’ the way its satisfying combat appeals to the viewer is somewhat similar.”

But, Miyazaki said, there are many more differences.

“For example, there is no character creation aspect; the protagonist is a set character and the growth and customization mechanics are quite different,” Miyazaki said. “The main differences are the dynamic movement made possible through the grappling hook, and the intense, white-knuckle combat. Another difference is the variety of choices one has surrounding combat; from stealth to the various Shinobi prosthetics.”

In designing “Sekiro: Shadows Die Twice,” which hits PlayStation 4, Windows PC, and Xbox One on March 22, From Software said there were two main catalysts.

“The first was dynamic movement that makes use of the rich, multi-layered map, along with intense, edge-of-your-seat combat,” Miyazaki said. “The second is a character that can execute both of these things in a way that is both believable and cool (i.e. a ninja). “

The game’s intriguing take on combat, which has players focusing on “breaking” an enemies stance, seems drawn from some of the inherent tenants of kendo. In the martial art — a modernization of traditional Japanese swordsmanship — opponents don’t wildly swing their bamboo swords at one another, instead, there is a highly formalized approach to attacks and counter-attacks. Perhaps most importantly, both people need to be aware and ready for the attack to happen. The video game’s use of stance seems to be a metaphor for kendo’s reliance on the opponents fighting spirit or kisei. The result of this focus in both kendo and “Sekiro” are flurries of gauged attacks built around both the attacker and defender’s total control of their weapon and fighting stance. Both require not just good timing, but the ability to read an enemy and know when the time is right to initiate an attack or defense.

Miyazaki said they referenced kendo quite a lot when designing the protagonist’s animations.

“However, we added much of our own rearrangement and interpretation in order to optimize this for the game,” Miyazaki said. “I feel like we might upset some people if we said we took inspiration directly from kendo.”

Whether deliberate or not, the game ultimately feels different than a lot of other titles with swordplay. Miyazaki describes it as “difficult and dynamic.”

“It’s always putting you an inch away from death,” Miyazaki said. “It’s about the fight surrounding a single moment, a single opportunity. Whether it’s the environment, the shinobi tools or information regarding enemy weaknesses, one must put all of these to use in order to take on the toughest of foes. It’s about being strong but also brittle. It’s about using all of these elements together to fight like a ninja in a way that’s unique to the world of ‘Sekiro: Shadows Die Twice.'”