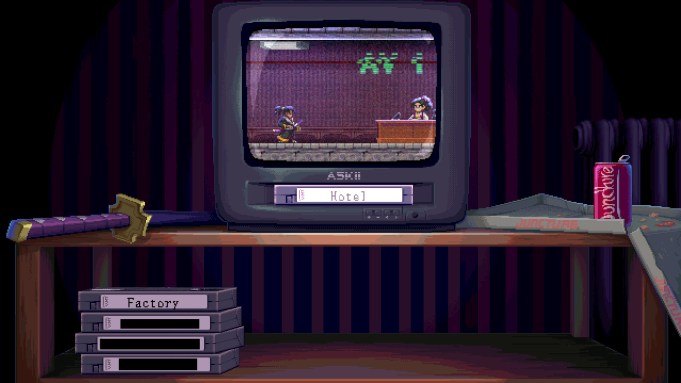 Askiisoft’s Justin Stander has been making games — essentially on his own — since he was 13. But he says “Katana Zero” is his first substantial creation.

And it’s a doozy.

A neo-noir action platformer, “Katana Zero’s” story was inspired by revenge stories like “Oldboy” and “John Wick” and was designed to deliver what Stander calls a “hypnotic zen of violence” through tight, action-based combat.

The game’s horizontal, pixelated levels are highlighted with lines of neon color and bright splashes of blood, and the gameplay is made brutal by its use of single-hit deaths. Everything in the game, including the protagonist, dies in one hit.

The gameplay is extremely responsive with a sort of flow that gently pulls the player into the stylish world.

The narrative concept behind the game is that each playthrough is really just the character planning how he would approach level. So when the character dies it’s just a bad plan and he tries a different approach. When the player makes it through a level, that’s the plan actually being executed successfully.

While your main weapon is a katana, it can be used to cut down enemies and deflect gunfire back at enemies. You can also dash and manipulate traps and explosives to take down bad guys.

“I’ve spent a lot of time making games, and I felt it was time to make something more substantial than the free, shorter games I’ve been making, “ Stander said. “I originally wanted to make it a gameplay focused thing but as I kept working on it, it changed from a two-year project to a six-year project and I injected all of this narrative and an in-depth story.”

While Stander’s earlier works — perhaps most notably “Tower of Heaven” — were all relatively small games, there is still a core tenant that followed to his work on “Katana Zero.”

“All the games I make, they’re exactly as long as they need to be,” he said. “I try to put zero fluff into them. I take the mechanic, I take the story and make it as interesting and exciting as possible.”

“Katana Zero” is due out on Windows PC and Nintendo Switch on April 18.