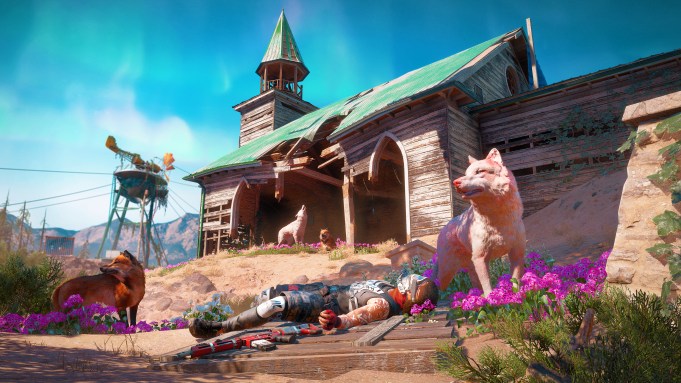 The almost ironic neon blooms of setting, the scavenger hunt narrative, the familiarity of core play offset by tweaks in the formula all result in an experience that seems to struggle to find itself, a game caught mid-transformation.

Perhaps it’s unfair to cast so large a conclusion over a just a couple of hours of experience with “New Dawn,” but this early time with the game was what developers put forward as a demonstration of what players could expect.

In my time with the game earlier this week, I was delivered a short backstory that reminded me that “New Dawn” takes place 17 years after “Far Cry 5.” That I would play as the captain (man or woman) to Thomas Rush — a sort of roving folk hero traveling the rails of this color-drenched post-apocalyptic America before his train was derailed in Hope County — setting of “Far Cry 5.”

It’s here that the game opens up inside the walls of Prosperity. While a player could just run off into the wilds and revel in the mousetrap havoc of Far Cry’s interlocking systems, the first true mission is a call to go rescue Rush from a coal mine. This opening mission is about 20 minutes into game’s open.

Taking on the encampment around the coal mine feels like every other mission in a Far Cry game, you have icons that show when you’re being spotted, enemies roaming the area and accidental mayhem that can come from a random explosion or encounter with wild animal.

Once located and freed, the mission switches to driving back to Prosperity either in the back while firing off a mounted gun, or around front maneuvering the vehicle around hairpin turns on cracked asphalt and dirt roads, swerving the miss the occasional pink-antlered wildlife.

After the rescue, players can continue down the story by taking on missions, hunting for outposts to capture or going on treasure hunts. Early on, though, you’re asked to help upgrade Prosperity. You can do this by bringing two specialists to the camp and upgrade three facilities. Each specialist is their own mission. I decided to kick off my upgrade by hunting down Bean, the creator of an aptly-named post-Internet Wikipedia. Finishing the mission convinces him to set up camp inside the walls of Prosperity.

These sort of side missions deliver character, but not really any plot. Plot, it seems, is meant to be pieced together from conversations, notes, and other bits of fiction peppered across the land.

The key antagonists of “New Dawn” are the Highwaymen, a band of thugs that seem to be taking over the country. In Hope County, they’re led by twin sisters.

Game director Jean-Sébastien Decant pushes back on the notion that the game seems light on story when it’s brought up.

“I don’t think so,” he says in a phone interview. “I think we’ve made a lot of innovation on the gameplay side, but the story is very much present.

“But it starts slow and it escalates as you play the game.”

Decant says that players will have to uncover the story “like a puzzle. The more you progress the more you will become engaged.”

“In ‘Far Cry 5,’ I tried to have an approach in which you could do whatever you wanted and then created moments to deliver the story,” he said. “But we listened to the community and we wanted to bring more freedom so you’re not forced to do a mission with specific people.”

With “New Dawn,” the team decided to build the story around Prosperity, which serves as the backbone of the game.

This change, from the story approach taken in “Far Cry 5” highlights an issue that the Far Cry franchise has long struggled with, the balance of player freedom and sandbox play with the desire to tell a story.

“I think Far Cry has always been a bit schizophrenic since ‘Far Cry 3,’” Decant said. “The more we progressed the more we are trying to blend [narrative and gameplay]. I think [with ‘New Dawn’] we managed to get into a space where there will be a story touching you, one in which you will be involved, without being forced.

“New Dawn” he said, is about freedom and entering the world however you want.

Where the developers say “Far Cry 5” was a game designed to create a parallel universe, one in which the apocalypse is brought forth by a religious zealot with far-right leanings, it still raised uncomfortable questions for Ubisoft. Decant still says that the game wasn’t meant to speak to the current state of the United States, but rather stuck to the idea of exploring cults in the United States, an idea the company said it started exploring well before the current state of U.S. politics.

“New Dawn,” Decant notes, is further away from the real world.

“It is set in the United States 17 years after the apocalypse, but it’s not back to a lost frontier,” he said. “It’s a place where they don’t have much to live on. It’s a dog-eat-dog world. ‘Far Cry 5’ was about being on the brink of the collapse, this one is about much more, about a new generation seeing the world differently.”

“Far Cry New Dawn” is a game that seems to be in the midst of evolution, but not quite where it wants to arrive.

When I ask Decant if he sees this game as something more akin to the almost parody of “Far Cry 3: Blood Dragon” or the experimentation of “Far Cry Primal” he says he believes the game is in between the two.

Perhaps the issue is that in hoping to deliver something surprising, Ubisoft is holding too much back.

The twins, for instance, are meant to be a major element of the game.

“I’m very excited for the players to discover Mickey and Lou (voiced by Cara Ricketts and Leslie Miller),” he said. “it’s exciting to try something new. To have not just one but two people in your face. When you have moments with them it’s a peek into the world. Having two characters changes a lot of the situations.”