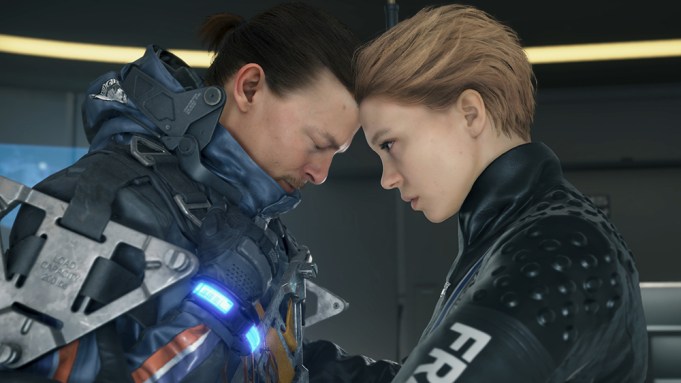 There are a few reasons why “Death Stranding” might seem like a marketing slam dunk. It’s the first game from Hideo Kojima, the video game legend behind the “Metal Gear” series, since 2015, and also the first since he reformed his Kojima Productions into an independent studio, partnered with Sony Interactive Entertainment. It boasts Hollywood star power like “The Walking Dead’s” Norman Reedus, Mads Mikkelsen, Léa Seydoux and Lindsay Wagner.

Just one problem: up until a few months ago, few people actually knew what the game was about. Headlines called trailers “weird and confusing,” and fans on message boards were left scratching their heads over where Kojima’s latest could possibly take them.

That was all part of the plan, Asad Qizilbash, PlayStation’s global VP of exclusive games, told Variety. He said the nature of the campaign made it an “interesting challenge,” but they decided they’d embrace the “mystique about a Hideo game.”

“If you look at the Kojima games in the past, it’s always had that sense of mystery,” he said. “What we did is just sort of embraced that and leaned into it, and just kept it.”

Lean in they did. The first trailer, revealed back at E3 2016 and driven by the Kojima Productions team, showed little more than a naked motion-capture Reedus, sobbing as he cradled a baby on a desolate beach. Later, cast members like Mikkelsen and Seydoux were announced, additional (still mysterious) trailers were unveiled at major events like the Game Awards and finally, at the Tokyo Game Show in September, Kojima unveiled almost an hour of gameplay. It’s been a steady drip of information designed to keep fans hooked.

“It’s like a Stanley Kubrick movie or a Christopher Nolan movie, where these are very complicated narratives,” Qizilbash said. “And so what you’ve got to do with the marketing is create enough intrigue in the story, but just really focus on tone, emotion and atmosphere.”

He brought up giving fans “Easter eggs,” “little pieces of breadcrumbs” that they could grab onto — such as that baby in the first trailer. Even with a steady drip, it’s easy to risk fans getting frustrated with the lack of information. Qizilbash noted that his team keeps an eye on fan feedback and the information they’re asking for, and tries to strike a balance between refraining from giving away too much and creating intrigue. Kojima himself has been open about wanting to avoid spoilers before players get their hands on the game.

“At the end of the day, we want to respect what Hideo and the creators just don’t want out there in terms of spoils, because when you play these games, you really are fully immersed in them,” he said. “To really appreciate them, there are some things you just want to be surprised by. And sometimes, with marketing, you can overindex on giving too much information, where you lose a lot of those surprises and that’s sometimes the beauty of the game.”

Qizilbash compared marketing campaigns to being shaped like a bowtie: starting very broad, then fine-tuning the marketing to include elements like gameplay and narrative, and then going back to a broad approach ahead of launch. PlayStation was in charge of the broad approach, while Kojima Productions tackled those more niche reveals, appealing to those who are already fans of Kojima and/or have been keeping up with the game.

And, of course, Kojima’s name is one of the biggest marketing perks, and Qizilbash said they knew they wanted to get Kojima’s “core fans” on board early on. To be sure, Kojima has been the face of the campaign, building hype at major events and giving emotional, detailed interviews. On posters, “A Hideo Kojima Game” is featured prominently, larger than the names of the Hollywood stars.

TGS now started. I’ll see you guys at the stage! Here’s new image of DEATH STRANDING by Pablo Uchida, the genius painter whom I even feel jealous of his talent. Title design by Kyle Cooper. We have a strong strand by respecting each other. 👍🌈🦀 pic.twitter.com/gGyBhWSv5S

Appealing to more casual gamers, or those who may not know much about Kojima’s work, is a different beast. One strategy: focus on said Hollywood stars, Reedus in particular. Reedus, with his established fanbase from playing a “Walking Dead” favorite, also gives the marketing team a well-known face to put on its posters and in its short TV spots, where it might be hard to capture “Death Stranding’s” larger themes.

“Trying to get an incredibly sophisticated and complicated story into a 30-second spot, obviously that’s a challenge,” he said. “And so we just kind of just have to strip it down to certain things: getting across the atmosphere, getting across the tone and getting Norman Reedus front and center, because we know that will be able to attract an audience that may not have known about the game.”

PlayStation tackled initiatives that were a little more out-of-the-box as well. It teamed with Sony Music and its RCA label to create an original soundtrack for the album, “Timefall,” featuring original songs from artists like Major Lazer, Khalid and Chvrches. On Tuesday, there was also a New York red carpet event to celebrate “Death Stranding,” which Qizilbash likened to a movie premiere. On Friday, a new spot for the PS4 Pro (which can be viewed above) will debut; it spotlights “Death Stranding” and is “trying to showcase the emotion you can get from games,” said Qizilbash.

They also teamed with “Rick & Morty” to create a short “Death Stranding”-related bit, which finds the titular grandfather and -son arguing over whether to eat that important baby. Qizilbash said PlayStation saw a sizeable overlap of people who are fans of Kojima and more casual gamers within the “Rick & Morty” fanbase, leading to a partnership that made sense despite the departure in tone from the rest of the campaign.

“We just trust that they’ll respect our property and you kind of have to take risks,” Qizilbash said. “Tonally, it’s very different from what ‘Death Stranding’ is, but sometimes you have to do that just to capture certain audiences who may not have been interested.”