Death, Guns and Bananas in ‘My Friend Pedro’ 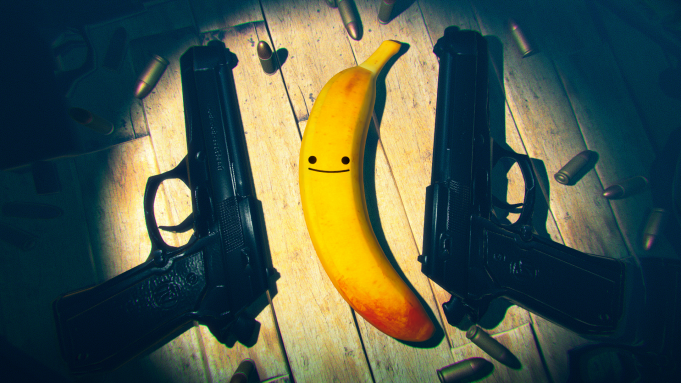 “My Friend Pedro” is an orchestra of body-bending, bullet-spewing violence orchestrated by a talking banana.

The Nintendo Switch and Windows PC title started out as Flash game in 2014, but developer Victor Agren decided he wanted to do a lot more with it, said publisher Devolver Digital’s JM Specht.

In the game, you awaken in an unknown place and your friend Pedro, a sentient banana, starts giving you instructions that include killing a lot of bad guys.

The game makes use of split aiming, slow motion and lots of physics-based movement to turn those killing sprees into something both artistic and adroit.

“The idea of the game is to get good at utilizing the systems to create these very extraordinary scenes of death and destruction,” Specht said. “I describe it as the child of ‘Max Payne’ and “Tony Hawk Skater.”

The point of the game isn’t just to survive each level, but to do so in such a deadly and artistic way that you get the highest score.

“You can have a lot of fun doing ridiculous tricks,” he said. “You can kick a skateboard at someone’s head, have it bounce off of them, and then ride it down the stairs.”

The levels play out as tiny sandboxes of death, fun to tackle over and over again as you try to work out the most creative ways to dispatch the gun-toting enemies.

The PC version of the game will feature a button that can create instant Gifs of your favorite scenes from the game so you can capture and share them, but Specht said he’s not sure if the Switch version will get the feature.