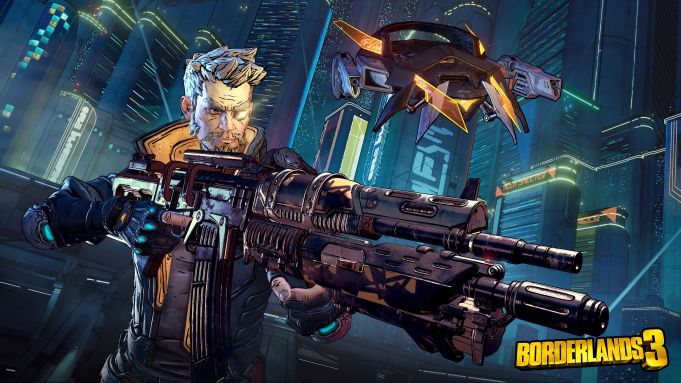 On its cel-shaded surface, you’d be forgiven for thinking that “Borderlands 3” may only be a half-step towards a fully fledged sequel. With unmistakable visual flair; an endless litany of procedurally generated weapons; loud, irreverent characters; and hectic four-player co-op centered around the compulsive collection of loot, this is a threequel that stays close to the core tenets of the series.

So, when just sat watching a little snippet of Borderlands 3, it’s all a little too familiar.

Get the controller in your hands, though – as Variety did shortly after Gearbox studios president, Randy Pitchford, introduced the game with an on-stage demo – and it becomes apparent where the team has made major strides in the last five years of development. The vivid art style? It’s got a new lease of life with the introduction of multiple explorable planets, each one a separate open world. That seemingly impossible list of guns? They now have a heftier weight, far eclipsing recent shooters like “Anthem” and “The Division 2,” instead packing the punch of best-in-class FPS’ like “Destiny.”

Chris Brock, producer at developer Gearbox, explained to Variety how games like “Titanfall 2” in particular reminded his team how much fun it can be to move around a combat space. How, in order to be considered a success by contemporary shooter audiences, their upcoming new game has to hit a much, much higher bar in terms of movement and responsiveness. Shooters nowadays simply aren’t just about guns, so the team studied the current online FPS genre – a collective consisting mostly of games that have aped the formula sculpted by the original “Borderlands” – to find out where they could make the simple act of navigating the play space even more satisfying. It’s the reason why the game has taken this long to make: it’s not just far bigger in scope, but every part of its foundation – from gunplay to movement to AI – needs to be far better to surpass the expectations burdened on its shoulders.

Throughout our lengthy demo, two new character classes were shown off – Amara the new Siren, and Zane the new Enforcer – as they battle through the new planet of Promethea. The planet is home to a vividly hand-drawn mega city that looks like something out of “Star Wars”, with a whole new range of enemies that look like they’ve been ripped straight out of Brian K Vaughan’s comic epic, “Saga.” It’s dazzlingly colorful and a world away from the desert dust bowl of Pandora, the planet that has served as the “Borderlands” series’ home until now. It’s just one of the multiple new planets that Gearbox is yet to discuss in more detail. Planets aren’t just visually varied, either, and Brock says the team is keen to discuss more about what new stuff players can find in these new worlds closer to release.

The dazzling color palette runs over into the abilities themselves. Character builds have always been a focal point of the Borderlands franchise, and here Gearbox adds more powers and augments for them to further diversify the potential personalization of your chosen avatar. Special moves like the ability to create a digital decoy, which you can then teleport into; or a move that punches a glowing fist through the ground below enemies in order to suspend them, mid-air, for easy targeting. These are individual elements of an expanded arsenal that, on their own, feel satisfying but as a combined whole best epitomize the enormous newfound breadth that even a vertical slice of “Borderlands 3” demonstrates.

Yes, this is ostensibly just a prettier, bigger game than the last one, with new enemy types to shoot and new guns with which to do said bloody murder. But the mechanical underpinnings of that glorious spectacle have been tinkered and tuned to such a degree that the feedback loop of trigger-pulling and loot-hunting feels just as fresh as it did back in 2008 and 2012, albeit with an even more gratifying adrenaline hit to boot. Big guns firing charged electricity, vicious submachine guns, new alternate fire modes and more all create a sense of near-constant discovery – both on the macro and the micro levels – that lets “Borderlands 3” show its upper hand.

Even the technological foundations of co-op – which forms the meat of where “Borderlands 3” players will spend much of their time – has been overhauled for a 2019 release. Gearbox refers to it as a sort of auto-leveling, where every player in a session, no matter what level, will face enemies that are matched to their characters. And players will be none the wiser thanks to the algorithmic magic whirring in the code.

Brock describes it as a “game changer” that seeks to address the imbalance between friends who play games together. “We’re all getting older, right?” He says. “We’ve got kids. It’s hard to play. It’s hard to be the same level.” That was the driving force behind the design decision at Gearbox: what if making sure you’re the same level as your friends, with their different lives and different schedules, wasn’t a thing you had to worry about? What if you just play with your friends and the technical wizards at Gearbox did the complicated bits for you. It’s only an optional feature in the game, but that could be a huge deal for the genre as a whole.

So, forget the cel-shaded surface for a second. “Borderlands 3” is unavoidably more “Borderlands.” But it’s a “Borderlands” that’s fit for today, rather than hanging onto yesterday. It’s a “Borderlands” that wants you to play with your friends, no matter if your lives differ. After the recent disappointments, and occasional disasters, of some of this year’s most high profile online shooters – games which promise limitless fun with consistent updates and new stuff to do – Gearbox’s latest looks like it packs the breadth, the punch, and the personality to reset the bar it single-handedly created over ten years ago.