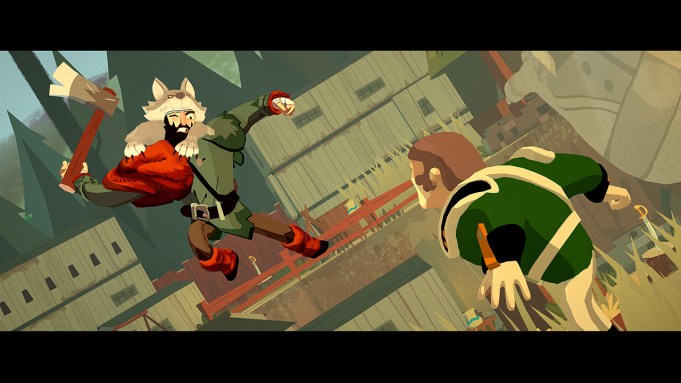 “Bloodroots” is an over-the-top kill-fest meant to be played on repeat that took its pulsating pacing inspiration from music videos.

“I come from a cinema background and used to work on music videos,” said Raphael Toulouse, co-founder of developer Paper Cut. “In music videos they switch pacing every ten seconds to keep your interest.”

“In the game, every three minutes we’re throwing something new at the player to keep it fresh.”

In the colorful Nintendo Switch, Windows PC, and PlayStation 4 game, players take on the role of Mr. Wolf, a killing machine betrayed and left for dead at the beginning of the game. Now he’s seeking out the person who double-crossed him to exact some vengeance.

Wolf can use just about anything in the world to take down the enemies that come at him, from a hatchet to ladders to carrots, turning the experience into a ballet of decapitation, whirling bodies, and sprays of blood.

“The real inspiration for us was Jackie Chan,” said Toulouse. “We thought it was a cool idea to make an action game focused down on this aspect of Jackie Chan, that he uses everything around him as a weapon. So all of the objects have funky behavior and surprises.”

The single-player game is set for a release this summer and will take between six and nine hours to play through, but Toulouse sees “Bloodroots” as the sort of game that can be played and replayed, and replayed thanks to the score and an online global scoreboard.

“It’s pretty much a skill game,” he said. “That’s an important aspect for us.”