Taron Egerton and Awkwafina Share a Love for Elton John, ‘My Vag’ and Miss Piggy 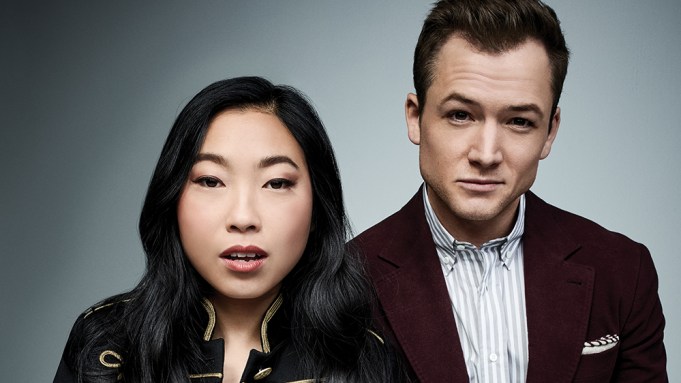 Awkwafina (“The Farewell”) and Taron Egerton (“Rocketman”) sat down for a chat for “Variety Studio: Actors on Actors.” For more, click here.

Taron Egerton’s portrayal of Elton John in “Rocketman” is both extravagant and humanizing, as he reinterprets John’s classic songs to tell the iconic singer’s life story. In “The Farewell,” Awkwafina plays Billi, a lost New York hipster who, along with her family, goes to China to see her grandmother for the last time. She infuses her character with nuance, delivering both pathos and laughs. Together, the actors reflect on how they got here.

Taron Egerton: Within the space of a year, you had “Ocean’s 8” and “Crazy Rich Asians” come out, and “The Farewell” premiered at Sundance. That’s a crazy year. How’s it been?

Awkwafina: It’s been good. “The Farewell,” essentially, was my first dramatic role. When approaching it, reading it, there were things I was unsure of, but then there were things that I was very sure I knew — that I could understand what she was going through.

They say when you get into your costume, you get into the character — there’s a part of you that really becomes that person. And that didn’t happen to me until I was in China against the backdrop of the town where [writer-director] Lulu Wang’s family is really from. It’s quite an emotional journey. When I got home at night, it was still with me.

Egerton: Was a movie career always on the horizon for you, or was it something that kind of happened?

Awkwafina: It was never a plan. I started at a time when I really had nothing to lose. I was this lost 20-something in New York, and I put a video on YouTube, and it was the biggest thing that I ever probably did in my life.

Egerton: Like a music video? Is it the one that I think it is?

Egerton: It’s easier for you to say it! Were there any performances or films you saw growing up that made you want to become an actor?

Awkwafina: Yeah, when I was young, I loved “A League of Their Own.” It was the first movie I remember seeing. I watched “Gorillas in the Mist” every day. And I would cry for it when it wasn’t on.

Egerton: I always loved anything with Michael Caine growing up. Also, I was obsessed with “The Muppet Christmas Carol.”

Awkwafina: Oh, that’s a good one. What was your favorite Muppet?

Egerton: My favorite Muppet in that?

Egerton: Miss Piggy’s work really falters in other areas of her career.

Egerton: Please don’t tell her that. There’s a really melancholic song in it called “When Love Is Found,” where a young Scrooge is breaking up with the love of his life. I remember that being one of the first times when you’re a kid where you’re not just entertained, you’re moved. And I think that’s partly the start of where my interest in performance through song and its capacity to make you feel things came from.

Awkwafina: Did you want to go into theater or —

Egerton: I’m from West Wales; it’s five hours’ drive from London. It’s really, really super rural. A film career was never on the cards, you know? No one else in my family had ever been involved with acting, but through boredom more than anything, I joined this local community theater.

Awkwafina: When you were looking into Elton John’s music and his lifelong relationship with music, what did you find?

Egerton: Playing Elton John is an interesting thing because although he is a creative genius, he is only able to do what he does with this lyricist, this poet, Bernie Taupin, who is the other central figure in the film.

Awkwafina: Yep. Who was incredible.

Egerton: Jamie Bell’s amazing in it, and he’s portraying an amazing guy. They’re two sides of a coin, and it kind of creates this symbiotic relationship where they really need each other — not only creatively but emotionally, in terms of the music, you know? The music of Elton John feels like it’s been a part of my life forever.

I guess a lot of people feel that way. But when I was very young, the first time I remember being aware of him was probably “The Lion King,” because I was, like, 6 when it came out. So I was right in that sweet spot.

And then, actually, when I was 17 and I auditioned for drama school, my performance-through-song audition piece was “Your Song.” Which is weird.

Awkwafina: That is weird! Did you work with Elton at all?

Egerton: Yeah, I mean, before we started, both he and David [Furnish], who produced the film, really allowed me into their life, and I went and stayed with them. Elton gave me the first diamond earring he ever bought, which I wear in the film in all the therapy room stuff.

Egerton: I feel really lucky. It’s been a really weird experience of playing someone and getting to know them quite well.