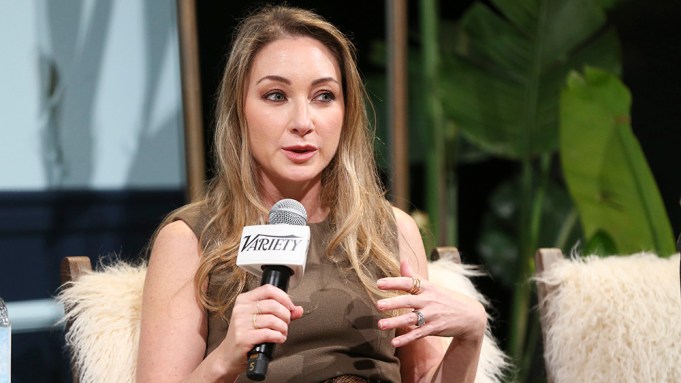 Warner Bros. exec Blair Rich would be a worthy recipient of the Variety Marketing Visionary Award Presented by Spotify based on “Joker” alone. Rich and her team crafted a spare, haunting campaign that helped turn the intellectually challenging, darkly comic drama into not just a worldwide smash, but the highest-grossing R-rated film of all time and the most profitable comic-book movie ever.

“Every movie is a stark contrast to ‘Joker’ because ‘Joker’ is such an audaciously original film,” says Rich, who will receive the award at the Variety & Spotify Visionaries Breakfast: Digital Marketers on Nov. 6 at the Sunset Tower Hotel. “Both ‘Joker’ and ‘A Star is Born’ were R-rated, and we took them both to festivals, but I would say the commonalities end there. The beauty and strength of Warner Bros. and how [Warner Bros. Pictures chairman] Toby [Emmerich] runs his production teams is that we have a really diverse slate.”

“Blair is a terrific and talented marketer, and when she gets behind a picture and filmmaker, there’s no stopping her,” said Toby Emmerich, Warner Bros. Pictures Group.  “’Crazy, Rich Asians’ and ‘Joker’ are just two examples of her commitment and dedication to helping create cultural events and maximizing performance at the box office.”

Although Warner Bros. releases its share of movies based on IP from the DC Universe, it is less reliant on CGI-heavy tentpole fantasies than fellow Burbank-based studio Disney.

Since being promoted to president of worldwide marketing for Warner Bros. Pictures Group and Warner Bros. Home Entertainment in January 2018, Rich has been tasked with leading the marketing efforts for a long and varied list of hits including “Ready Player One,” “Crazy Rich Asians,” “The Mule,” “Shazam!,” “The Curse of La Llorona,” “IT Chapter Two” and “Aquaman,” the latter of which grossed more than a billion dollars worldwide.

The diversity continues with the studio’s upcoming releases, which include the Stephen King horror sequel “Doctor Sleep,” starring Ewan McGregor; the period civil-rights drama “Just Mercy,” starring Michael B. Jordan; the crime thriller “The Good Liar,” starring Helen Mirren and Ian McKellen; and Clint Eastwood’s “Richard Jewell,” about the man falsely accused of the 1996 Atlanta Olympics bombing. And that means yet another busy awards season for Rich.

“There is no Warner Bros. playbook, no one-size-fits-all,” says Rich. “I think originality is our north star here, and making sure we bring something completely different to every campaign is essential.”

Rich began her Warner Bros. career fresh out of high school in 1993, working as an intern for Jeff Goldstein in the studio’s Western Distribution Group offices in Encino. She continued to intern for the company all through her college years at Georgetown University, and upon graduating in 1997 joined Warner Bros. Pictures International as a marketing trainee and began her swift rise through the ranks.

Although Rich is still relatively young for a top studio exec, she’s seen a lot of changes in over the years.

“Obviously, one of the great challenges in marketing is budgets aren’t going up,” she says. “If anything, they’ve become tighter. At the same time, there’s significant media inflation and you have to do more with less because of the explosion of digital and how many different ways you can reach an audience. You have to really understand before you start what the cadence of your campaign is going to be and the rhythm of a roll-out of a movie, so you can manage how the audience is going to receive it in a specific and calculated way.”

With “Joker,” Rich and her team wanted to make sure from the very beginning of the campaign to communicate that it was an R-rated film for an older audience, so it wouldn’t be confused with other DC fare designed for younger audiences. This was due in part to the fact that it had different incarnations of characters featured in other DC properties (notably “Suicide Squad,” featuring Jared Leto as the Joker, which has a sequel in the works set for August 2021 release).

The “Joker” campaign was deliberately spare. In April, the studio dropped the initial teaser trailer and no other content was released until August, right before the Venice Film Festival, which serves as the unofficial launch for Hollywood’s award season marketing efforts.

“We always liked the idea of a fall date because it felt like a movie that could be both critically and commercially successful and putting it in a film festival environment was another way to distinguish it from other DC fare and make it discoverable,” says Rich.

“In a business that is becoming more and more fear based in terms of decision making, Blair rises above by marrying pitch-perfect strategy with unmatched instinct,” says Phillips. “I have known and worked with Blair for close to 15 years and I am still in awe of her.”

Rich and her team had a completely different approach with another recent DC Comics adaptation, “Aquaman.” Released in December 2018, the film was sold as an all-ages experience with a campaign she describes as “bright” and “pop.” Star Jason Mamoa began his publicity round at Comic-Con in San Diego in July 2018 and later traveled to Malaysia to kick off a Pan-Asian tour. The film’s release went the reverse route, debuting first in China, then rolling out in Europe before finally opening in the United States.

In the past year, Rich has also been busy with two very different Stephen King adaptations: “IT Chapter 2” and “Doctor Sleep.”

“They’re both fantastic movies, but totally different strategies,” says Rich. “‘IT’ was a pop-culture phenomenon the first time around, and we were harnessing that and selling the epic conclusion, and its emotion came from nostalgia. With ‘Doctor Sleep,’ our campaign theme is ‘dare to go back,’ because we’re threading this needle between a standalone story based on Stephen King’s book ‘Doctor Sleep” and a sequel to ‘The Shining,’” the 1980 film directed by the late Stanley Kubrick. “We are really leaning into the iconography and the pedigree and the event nature of what ‘The Shining’ is, but we can’t have an overreliance on that, because then it’s not an original film that stands on its own, and that really is the film that [director] Mike Flanagan has made.”

Both “IT” and its sequel were promoted with live, open-to-the-public fan experiences at the corner of Hollywood and Vine. For “Doctor Sleep,” Warner Bros. flew members of the genre press and select social influencers from around the word to the Stanley Hotel in Colorado – King’s inspiration for the Overlook Hotel in his 1977 novel – where the studio recreated many of the iconic scenes from “The Shining” and “scared people to death,” according to Rich.

“We are huge believers in experiential marketing,” says Rich. “Basically, a consumer who has interacted with a brand and is then been able to share that experience as part of themselves on social media is, I think, two-thirds more likely to convert to a purchase of that brand — in our case, a movie ticket.”

While Rich has confidence in that statistic, she is careful when it comes to vetting the huge amount of marketing data available to her.

“Data is an incredible tool when used properly, but it will never be a complete replacement for gut instinct,” she says. “Because just like with any form of research, [people] are still responding to what is being put in front of them, which is not an infinite set of possibilities, creatively or otherwise.”

At the end of the day, Rich believes the key to being a successful marketer in this day and age is never being monolithic about your approach to anything.

“You have to find that originality, that thing that feels audacious enough, that feels pervasive enough,” she says. “It’s a very complex web of activity that you have to orchestrate to get to that right result, and it’s more complicated than ever.”