Comedian-turned-horror-maestro Jordan Peele veers farther into the dark recesses of America's collective id, implicating us as our own worst enemies. 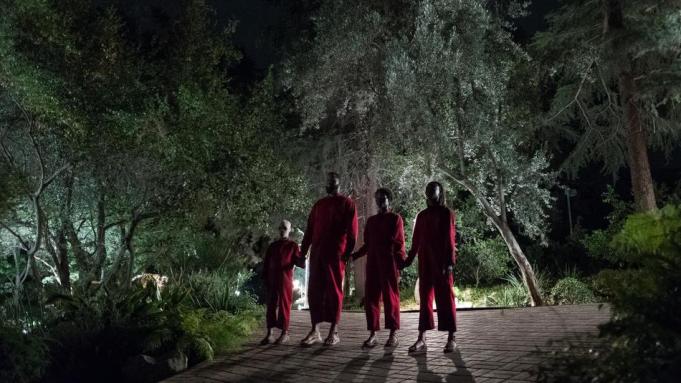 For all the genius of Jordan Peele’s 2017 debut, “Get Out” — a movie that oh-so-smartly reinforced its horror-movie skeleton with an adamantium-strong (and twice as sharp) racial-tension allegory — audiences seemed to have one critique in common: The movie wasn’t nearly scary enough. People aren’t likely to have the same complaint about “Us,” the genre-savvy writer-director’s terrifying — if somewhat less clearly double-edged — second feature, which comes loaded with nightmare-inducing images of tunnel-dwelling döppelgangers who’ve come to claim the privileged lives their aboveground counterparts have been enjoying all this time.

Debuting to an enthusiastic reception at the SXSW Film Festival (keep in mind, those Austin audiences seem to love everything) mere weeks before Peele’s reboot of “The Twilight Zone” drops, “Us” arrives in a shroud of secrecy that definitely works to the film’s advantage. The less you know going in — and the less energy you spend thinking about it after the fact — the better the movie works, trading on some uncanny combination of Peele’s imagination and our own to suggest a horror infinitely larger and more insidious than the film is capable of representing.

Do you ever get the sense that your actions are partly out of your control? Does it occasionally seem like some external force is driving your decisions? That disconcerting feeling may explain why Adelaide wanders off from her parents during a trip to the Santa Cruz boardwalk, straying from the amusement park proper to visit an eerie Vision Quest attraction along the beach by herself. But something happens while Adelaide is exploring the hall of mirrors: A storm rages, the power goes out, and she comes face to face with something more than her reflection.

That was 1986. The encounter is so unsettling (for Adelaide … the horror hasn’t quite kicked in for audiences just yet) that she’s suppressed its memory for more than 30 years — which happens to be when the film picks up, in the present day. Adelaide (played by Lupita Nyong’o) is now in her 30s, married to Gabe (her “Black Panther” co-star Winston Duke, a source of welcome comic relief), with two relatively well-adjusted kids, Zora (Shahadi Wright Joseph) and Jason (Evan Alex). The Wilsons. Though not quite as wealthy as good friends Josh and Kitty Tyler (Tim Heidecker and Elisabeth Moss), they are the picture of the ideal American family, heading back to Santa Cruz for their summer vacation.

As in “Get Out,” we know to suspect that when things look too good to be true, they probably are, and yet, it would take a pretty twisted mind to anticipate what Peele has in store for us this time. There’s that word: Us. Within the realm of scary movies, döppelganger stories occupy an entire subgenre unto themselves — and they nearly all end with the same “twist,” which won’t surprise many here — though Peele is a clever enough social commentator to orchestrate an entire horror movie around that old adage, “We have met the enemy, and he is us.” Americans spend so much time worrying about “the other” — demonizing immigrants, unfamiliar races, or the all-powerful 1% — that we seldom think to look for what’s holding us back where we’re most likely to find it: in the mirror.

Early in “Us,” youngest child Jason gazes out the front window and eerily announces, “There’s a family in our driveway.” Sure enough, there stand four people in silhouette: mother, father, daughter, and son. While Adelaide doesn’t hesitate to call the cops (another Peele signature, making his characters smarter than the dead-meat-walking idiots who typically populate horror movies), Gabe does the manly thing, all but thumping his chest as he steps outside to confront these unannounced visitors, who freak him out by refusing to acknowledge his macho display. The movie is constantly illustrating — and nearly as often inverting — the gender roles we play in a patriarchal society, as when daughter Zora takes the lead to become the family’s most effective defender at one point.

But long before the police have a chance to arrive (they never get there, by the way, which is one more reason N.W.A’s “F— tha Police” feels like such a fitting addition to a soundtrack that otherwise relies mostly on Michael Abels’ nerve-twisting suspense work), those four uninvited guests find their way into the Wilsons’ living room, and wouldn’t you know, they look just like their hosts. The press notes refer to these almost zombie-like home invaders, dressed in red and all but incapable of human speech, as “the Tethered,” although “twins” is the closest the characters come to naming them.

Peele doesn’t explain much about these mysterious visitors, letting our worst fears run wild as the intruders hover menacingly around the family, dressed in heavy-duty red coveralls. Only Nyong’o’s döppelganger can speak, and even then, her words come out strained, as if she’s never had reason to talk before — and perhaps she hasn’t, as the Tethered seem to communicate primarily via sign language and guttural animal noises. One thing is certain: They do not come in peace, though Peele draws out these early uncertain scenes, taking advantage of the ambiguity for the threat to unfold in our subconscious.

That’s a brave move on his part, since it assumes that Americans all share enough of the same anxieties — and/or pop-culture reference points — that Peele can identify and exploit our collective dread. And perhaps we do: What could be more upsetting than being faced with primitive, apparently resentful versions of ourselves looking to take possession of our homes and hurt our families? But too many of Peele’s concepts don’t quite come across, like the suggestion that the Tethered have been manipulating us all along, or the implication that they can anticipate our defenses because they are us.

We never really see that last idea in action. In fact, although the Tethered seem to have been far more successful killing everyone else in the country, they are no match for the Wilsons, who fight back with fireplace pokers, golf clubs, and other blunt objects. And then there’s the whole matter of the third act, in which “Us” attempts to explain its master plan, taking us beneath the surface to reveal what may as well be an elaborate metaphor for the id — the primitive place where our impulses and unconscious aspects of our thinking (which could well be our worst enemy) lurk. Like the “sunken place” Peele invented for “Get Out,” this sinister domain offers a visual allegory for the darker aspects of our own socialization — which, if the film were more successful in its final stretch, would force us to confront the monsters within each of us.