By now, audiences are used to seeing Jenny Slate in twee indie-movie mode, but this aggressively cute comedy only works if that's your thing. 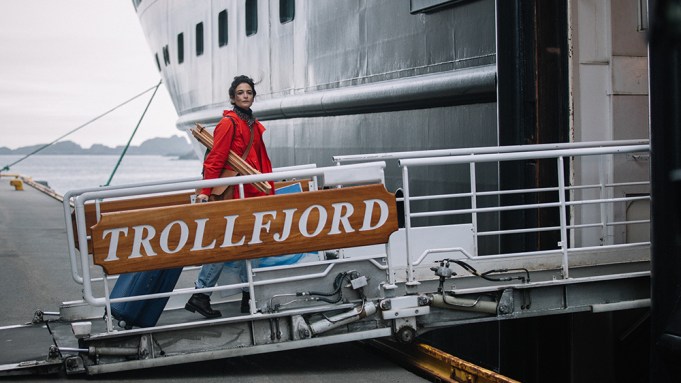 In “The Sunlit Night,” Rebecca Dinerstein shows that she can write funny breakups, awkward Jewish family gatherings, and sweet-and-sour wedding speeches. One doubts she had to go all the way to the Norwegian Arctic to develop that skill, but at least her pilgrimage paid off in the form of the kind of personal writing sample — a twee running-from-romance-only-to-find-it comedy set at that far Northern remove — that, while unlikely ever to be produced, might easily score her work on the staff of a sitcom.

Except her screenplay (first published as a novel) did get produced, and now exists as the kind of movie that Sundance audiences love (the opening-night crowd laughed in all the right places) but hardly anyone goes to see in general release. Stranger still, it has been directed by German director David Wnendt — whose last film, “Wetlands,” was an outrageous celebration of the many things that can be put into or come out of the female body. Here, Wnendt suppresses his naturally provocative streak to deliver an aggressively cute existential comedy instead. That said, there are a few jarring instances, as in an overhead shot that places a bloody leach next to a pot of tomato pasta, when his natural instincts come through.

But “The Sunlit Night” calls for a much different approach, and Wnendt has what it takes to make a “How I spent my summer vacation” yarn and make it look like “Amelie,” taking full advantage of the colorful locations and gorgeous light. Inspired by a trip in which she banished herself to Norway’s Lofoten Islands, Dinerstein reimagines herself as Frances (played by baby-voiced comedic actress Jenny Slate), a youngish New York painter who, shortly after getting dumped by her nothing boyfriend, decides to accept an artist’s apprenticeship “at the top of the world.”

Lofoten is so far north that the sun never sets during summer (hence the title), creating an unusual kind of stir-craziness that is more commonly associated with horror movies than quirky indie dramedies, although the latter will take eccentricity wherever they can find it. That probably explains not only the casting of Slate but also the assignment Frances gets upon her arrival — painting the interior of an old barn bright yellow — and the fact that she’ll be spending her (bright) nights in a cutesy trailer with an adorable baby goat.

The previous assistant has scrawled the words “Welcome to hell” in lipstick across the cabinets, and if composer Enis Rotthoff’s score were any less upbeat, you’d swear you were in a slasher movie after all. But no, “The Sunlit Night” more closely resembles the second half of Alexander Payne’s “Downsizing,” which proved that a similarly end-of-the-earth locale doesn’t make dull characters any more exotic or exciting.

“They keep sending me kids who think they’re special,” growls Frances’ host, a surly loner named Nils (Fridtjov Såheim) who doesn’t much care for her chipper small talk but needs her to finish his barn project. And so he half-tolerates Frances for a while, slowly thawing as their monthlong collaboration wears on. Being funny comes easy to Slate, but she’s a good choice for this role because she can also scrunch her face up to convey a kind of child-like vulnerability, and this entire trip is designed as a growth experience for her character.

Frances does the work, but she’s more interested in exploring the local island culture — especially the Viking museum just up the road, where a fellow American has reinvented himself as a Norse chieftain (Zach Galifianakis, an actor who’s never minded looking ridiculous). It’s not easy for Frances to make friends in this place, although it’s also not clear why she would want to: Didn’t she come to Lofoten to get away from things and concentrate on her art? “I’m closed for business,” she tells her parents (David Paymer and Jessica Hecht), repeating the line just before her first rebound fling — which is odd, considering she has just spent the previous day stalking a Brooklyn baker, Yasha (Alex Sharp), who traveled all the way to Lofoten to give his father a traditional Viking funeral.

Yes, a Viking funeral. There was an entire decade when details like that were like catnip to indie distributors, although these days, so much of Dinerstein’s script feels like it could have been Mad Libs-ed together by a loopy-idea generator. Audiences know that Yasha and Frances are destined to be together not because of any chemistry between Sharp and Slate (they have none) but because they were both introduced in the first act while still strangers to one another in New York, and that’s how movies like this lay the seeds for soulmates to meet.

So, Yasha’s arrival sparks romantic potential, as well as a whole other subplot involving his estranged mother (played by Gillian Anderson) and more of the kind of family bickering that we can reliably identify as Dinerstein’s specialty. I’m not sure what brought the screenwriter back from her Norwegian retreat (maybe she had to write this novel first), but it’s pretty clear that Frances won’t leave without painting the blank canvas she’s been staring at all summer. And so the last cliché falls into place in the sort of crowd-pleaser that, ironically, will be lucky to find a crowd.