Melissa McCarthy, Tiffany Haddish, and Elisabeth Moss are mob wives who turn mobster in a drama that's just like 'Widows,' except not as good. 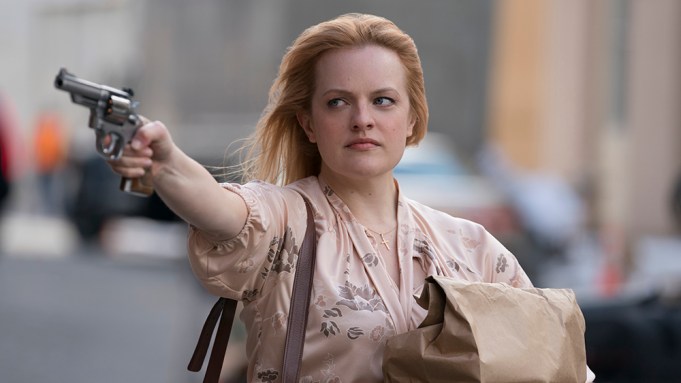 When two movie studios launch projects built on a suspiciously similar concept — it could be asteroid-hitting-the-earth thrillers or animated bug comedies, biopics about Truman Capote writing “In Cold Blood” or reboots of classic old monster franchises — it’s sometimes a coincidence and sometimes a case of flat-out imitation (which is the nice word for it). So I won’t speculate as to which of those two scenarios describes the relationship between “The Kitchen,” a light-but-not-really-comic drama about a trio of mob wives in Hell’s Kitchen in 1978 who become players in the Irish underworld after their husbands are nabbed during a robbery and sent to the slammer, and “Widows,” last year’s drama about four criminal wives who become masters of their hellbent fate when their professional-thief husbands are chased down during a robbery and killed.

“The Kitchen,” written and directed by Andrea Berloff, is based on a DC Vertigo comic-book miniseries that was published in 2015. “Widows,” directed by Steve McQueen from a script he co-wrote with Gillian Flynn, was based on a 1983 BBC miniseries. But the timing of the two films is close enough to raise an eyebrow.

What I will say is this. “Widows,” released during awards season, was an emotionally textured and exciting movie, ingeniously plotted and acted (though some critics nitpicked its plausibility), a genre entertainment that rooted its twists in a spry sense of character and a commanding portrait of the hurly-burly of Chicago street machine politics. It was a genre film that drove on all cylinders, right down to the climactic heist that was nothing too complicated yet all the more breathlessly alive as a result.

Whereas “The Kitchen,” which is being marketed as a summer popcorn movie, strings together generically intimidating but often weirdly defanged underworld situations and blood-soaked mobster clichés that we know all too well from other films and TV shows, though in this case they rarely take on a convincing life of their own. Watching Kathy Brennan (Melissa McCarthy), a devoted mother of two who has survived by keeping her head down, and Ruby O’Carroll (Tiffany Haddish), who married the brother of the local criminal captain but is still treated like an outsider, and Claire Walsh (Elisabeth Moss), a violently abused wife, we empathize with their predicaments. Yet as they seize onto their roles as organized-crime operators, we’re in and out of our involvement with these characters, which is based more on the iconography of their empowerment than on a gripping or authentic story.

Nabbed by the FBI during a liquor-store holdup, their husbands get sent to prison for three years, and Kathy, Ruby, and Claire are told by the local Irish gang that they’re “family” and will be well taken care of. But the first envelope of cash that each of the women receives won’t even cover the rent. They’re forced into crime, just as the heroines of “Widows” were, by the sheer blunt economic desperation of their circumstances — though in this case one might well ask why Little Jackie (Myk Watford), the local boss, is so damn stingy, given that the mob does tend to look after their own. I guess the idea is that it’s the late ’70s and the protection payoffs are thin, but mostly it’s that Jackie is a villain out of central casting, not just a crook but a vile meanie, the sort of sneering scumbucket who lives in a man’s world and doesn’t want to look after women or children any more than he has to. (The chivalry of the Italian mob, at least as it’s often portrayed in the movies, is markedly absent.)

So how do three ’70s housewives turn into gun-toting badass mob femmes? Making that sort of evolution convincing is what gave “Widows” its funky force. “The Kitchen,” on the other hand, is constructed in a rickety episodic way that doesn’t lend much psychological heft to the women’s transformation. Claire, for instance, starts off as a battered shard of a human being, but as soon as Gabriel (Domhnall Gleeson), a shaggy blond Vietnam veteran and mob soldier, shows up to rescue her from a dicey situation, she gets a quick tutorial in how to slice up a corpse, and before long she’s wielding her assassin’s gun with aplomb. It’s presented as a semi-joke, and a romantic one — the most timid of the women, and the most abused, becomes the most brazen, and falls in love with a nice cuddly hitman sociopath. ­But really it’s just a cartoon idea, though Moss makes her born-again ferocity palpable.

Kathy and Ruby, meanwhile, collect payoffs from local businesses (for a while, they use two of their husbands’ goon colleagues as enforcers), always with the idea that they’re treating the people who are paying them better than the previous regime did. During a meeting with the local construction workers, they practically turn into union activists. But a Hasidic leader one neighborhood away doesn’t want to hire the Irish, so a bullet to the head of his associate sets him straight. The fact that we don’t see the trigger being pulled, and that the victim was kind of a dick, is how this movie works. The brutality, when it counts, remains mostly off camera, so that “The Kitchen” dramatizes the key question about our heroines — how tough are they? — in a way that’s vivid yet vague.

Once their husbands get paroled, the film’s real villain comes into focus. It’s not the mob; it’s the tribal system of male domination behind it. The women have signed on with an Italian boss in Brooklyn, played by Bill Camp as a kind of goombah Teddy bear. (He’s just like our heroines: ruthless in a nice way.) And as Kathy starts to take charge of her destiny, we see, in Melissa McCarthy’s increasingly fierce performance, a hint of what the movie might have been: the tale of a new kind of feminine mystique — a methodical fury that weds the imperatives of a mother to the style of a gangster. But that movie needed a better script.

There’s a double cross you won’t see coming, and one that you probably will. There are woman-power rock chestnuts (“Barracuda,” “Gold Dust Woman”) on the soundtrack, and a dollop of rah-rah didacticism that makes “The Kitchen” feel, at times, like a gender-flipped remake of a movie that never was. Mostly, though, there’s a story that’s functional in a gloomy second-hand way. I wish Tiffany Haddish got to do more than glower, and that Margo Martindale had a bigger role as Helen, a dowdy behind-the-scenes mob queen who’s like Livia Soprano played by Mrs. Doubtfire. And I wish Andrea Berloff, who wrote “World Trade Center” and co-wrote “Straight Outta Compton” (this is her first time out as a director), portrayed the Hell’s Kitchen settings with more juice and flavor and detail — too much of the time, the film seems to be taking place in generic movie Mobville. The women are game, but there’s not enough heat in “The Kitchen.”