'Spring Breakers' director Harmony Korine is back with another decadent dive into drug-addled excess, this time featuring Matthew McConaughey as a stoner poet named Moondog. 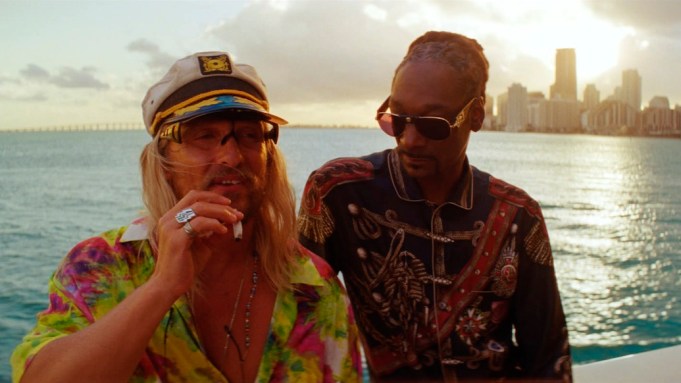 How can you tell when a movie star is committed to being taken seriously? It’s hard to ignore when someone like Matthew McConaughey drops a ton of weight, the way he did to play an emaciated HIV patient in “Dallas Buyers Club.” It’s also impressive when such an actor swings hard in the opposite direction, packing on the pounds, thinning out his hair, and masking his prom-king choppers with a set of crooked veneers, as McConaughey did for “Gold.” Stunts like that have forced audiences to reevaluate him as more than just a superficially handsome stud.

In Harmony Korine’s “The Beach Bum,” disguised beneath stringy Hulk Hogan-style hair, cheap flip-up baseball shades, and an ugly yellow snaggletooth, McConaughey shows the same kind of commitment in the role of Moondog — pot head and unofficial poet laureate of the Florida Keys — only this time, he’s unlikely to command the same respect. That’s because Moondog feels less like a transformation than a gross exaggeration of McConaughey’s preexisting off-screen persona: the blissed-out, bongo-playing stoner, with the anything-goes attitude and dog-whistle laugh. But more than that, the star is clearly having such a blast inhabiting this character, it doesn’t actually seem like work.

The question here isn’t if McConaughey is having fun, but whether audiences will find his laid-back, ever-lit persona nearly as entertaining to watch — especially when Korine celebrates so many of the vices that tend to rile more conservative moviegoers, pitching the parade of decadence at a level that even less judgmental audiences may find it exhausting. Simultaneously shaggy and hyper-stylized, “The Beach Bum” plays like a less-coked-out “Scarface,” the collected works of Charles Bukowski, and a Cheech & Chong movie all rolled up in one — an epic goof in which the cast (not just McConaughey but Snoop Dogg, Martin Lawrence, Jonah Hill, and Jimmy Buffett) play elaborate, semi-improvised caricatures of outlandish tropical fruits.

And then there’s whatever Zac Efron is doing as Flicker, a rich kid Moondog meets in rehab, before the pair of them decide to flee the cuckoo’s nest. The onetime Disney star shows up with bleached hair, bulging pecs, and a nutso beard into which someone has trimmed a series of uneven horizontal stripes. In a film where everyone seems ultra-relaxed, Efron is trying too hard, no doubt seeking the same kind of street cred fellow “High School Musical” star Vanessa Hudgens earned by shredding her good-girl image in Korine’s “Spring Breakers.”

At any rate, Flicker and the others are Moondog’s “friends,” although none is as strange as the man himself, who married into money — Moondog’s wife Minnie, played by Isla Fisher, is worth about a hundred million dollars — but prefers the bohemian existence in Key West. As Minnie puts it, “You just have to kind of accept that he’s from another dimension.” Those are wise words for anyone saddling up for Korine’s gonzo portrait of such a committed party animal, the kind of person for whom sex, money, and weed all fall into the “easy come, easy go” category.

Marijuana isn’t just a recreational pastime in “The Beach Bum”; it’s a full-blown lifestyle choice, and it’s not always easy for sober audiences to appreciate the film’s loose narrative flow as Moondog drifts from one can of Pabst Blue Ribbon to the next. If some enterprising toy company decided to make a Moondog action figure, he’d come with either a joint or bong in one hand, plus a purple thong and an assortment of Hawaiian shirts. Considering how far gone Moondog is most of the time, it’s amazing how active he is, and yet, the guy’s always on the prowl.

With Jimmy Buffett’s “A Pirate Looks at Forty” to set the tone, Korine introduces Moondog via a few endearingly sloshed escapades — adopting a kitten along the boardwalk, crashing a live set by Bertie Higgins at a dive bar, occasionally pecking out poetry on his portable typewriter — portrayed not in any conventionally scripted way but as run-on montages. The soundtrack is critical here, since it paves over the potholes between shenanigans while establishing the film’s lightly ironic sensibility: Moondog may be on the same wavelength as Eddie Money or Gordon Lightfoot, but it’s hard not to laugh when one of their corny classics pops up on the soundtrack.

On the day of his daughter’s wedding to a clean-cut square he dubs “Limp D—” (Joshua Ritter), Moondog goes on a wild bender, hooking up with a comely stranger in the kitchen of a burger stand while the ceremonies begin without him. His daughter Heather (Stefania LaVie Owen) has come to expect such behavior from her “genius” dad, while Mimi indulges her end of the couple’s open marriage, making out with rapper Rie (Snoop Dogg, essentially playing himself) — pronounced “Ray,” short for “Lingerie” — at the after-party.

The kids are married, joints the size of ice-cream cones are smoked, and things get a little too wild later that night, resulting in the ultimate bummer — at least, that’s how the film casually presents a tragedy that would have devastated far stronger men. But Moondog’s too Zen, or too baked, to feel down for long, and so his antics continue unabated — with the caveat that Mimi has the last laugh, threatening to cut him off until he publishes his long-delayed book. It’s an odd and insincere conceit for a slacker movie to exult Moondog’s complete disregard for societal expectations while forcing him into the kind of story where he’s expected to turn his life around.

Meanwhile, for those concerned with the moral decline of modern culture, “The Beach Bum” is bound to trip every alarm, showing a raging disdain for square society (in a moment of pure Korine, Flicker knocks over a guy in an electric wheelchair and steals his wallet) while dismissing the consequences of such misbehavior with cartoonish insouciance (as when Lawrence’s dolphin tour guide, Captain Wack, urges a family of tourists to jump into water teeming with shark fins, coming away with little more than a flesh wound).

Such hedonism isn’t irredeemable in and of itself, and yet, one wishes Korine were interested in more than just testing boundaries. It’s a shame to squander such a colorful character, considering how rarely we encounter anyone as memorable as Moondog on-screen. And yet, like James Franco’s cornrowed Alien in “Spring Breakers” — or the substances they abuse in both films — he’s best appreciated in limited doses. While Korine must have been steering by some kind of script, the strategy appears to be “let the wildest take win” as supporting characters like Flicker or Jonah Hill’s Southern-dandy literary agent (who sports hot pink and paisley and speaks in a bizarre Truman Capote-esque accent) try to upstage Moondog at every turn.

McConaughey’s instinct is to coast through it all, which serves him well, even when the movie loses its way. For better or worse, Korine has created a bad-example antihero for our times. Beware anyone who lives by the mantra, “What would Moondog do?”