With a digitally animated makeover, the macabre antics of the Addams Family now blend into the kiddified monster culture they helped create. 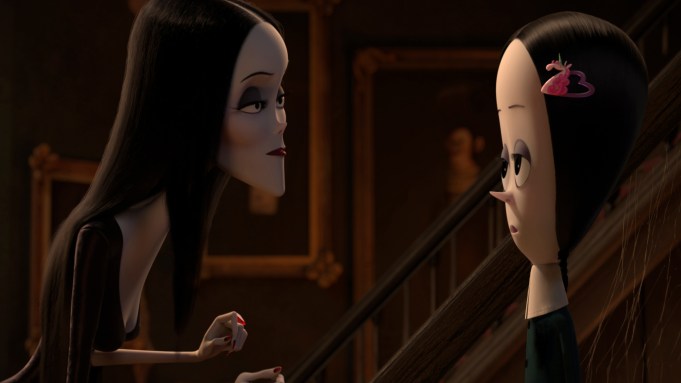 There must have been something in the water the week of Sept. 18, 1964. That’s when the ghouls-are-us sitcom “The Addams Family” premiered on ABC — and exactly six days later, the ghouls-are-us sitcom “The Munsters” premiered on CBS. True, only one of those shows was based on the sinister genius of Charles Addams (whose first cartoon to feature what would ultimately be known as the Addams Family appeared in The New Yorker in 1937). Yet the two shows shared a remarkably similar trajectory and attitude.

Each one lasted for just two seasons (“The Addams Family” ran for 64 episodes, “The Munsters” for 70), but together they marked a decisive turn of the entertainment screw, with the shows transforming Old Hollywood horror into gothic-absurdist laugh-track kitsch. You could say that “Abbott and Costello Meet Frankenstein” got there first, but that 1948 classic played the monsters straight, whereas “The Addams Family” and “The Munsters,” taking off from the camp spirit (and spirits) of Bobby Pickett’s 1962 novelty hit “Monster Mash,” turned their cavalcades of plaster demons into unabashed undead fun. Though the shows were aimed at adults, their natural audience was children. (I know. I was five at the time, and they seemed like the coolest shows ever.)

Fifty-five years later, it’s hard to imagine a world in which “The Addams Family,” with its harpsichord-and-beatnik-finger-snap theme song, was ever anything but ooky kids’ stuff. That’s not just because of the two previous tyke-friendly movie versions: the genial but lumbering “The Addams Family” (1991), and the breezier and wittier “Adams Family Values” (1993). It’s because of the whole rise of kiddie monster culture, which was kicked into overdrive by Tim Burton’s “The Nightmare Before Christmas” (1993), followed by such creature-feature black comedies as Burton’s “Corpse Bride” (2005), the bravura “Coraline” (2009), the “Hotel Transylvania” films, and TV cartoons like “Vampirina” (which I watch religiously with my 6-year-old daughter).

So when you go to see the new digitally animated version of “The Addams Family,” you should be prepared for a film that has all the comic danger of a bowl of Count Chocula.

And yet, that’s a little disappointing. Monster farces for kids succeed on the basis of how darkly delightful their off-color central characters are. Adam Sandler, for instance, has a field day in the “Hotel Transylvania” films, where his imperious daddy Dracula is in a constant otherworldly huff about the respect he thinks he’s owed. In the new “Addams Family,” on the other hand, the ferocious Oscar Isaac, speaking in some sort of generic East European accent, gets all but buried under the role of Gomez Addams, who has never come off as quite this quaintly old-world innocuous. Ditto for Charlize Theron, who elegantly vamps the role of Morticia without taking it over and owning it.

These two play off the flourishes of macabre comedy that are sprinkled through the film like marshmallow bits: Morticia, in the opening sequence, spooning out ashes from the urns of her late mother and father and dabbing them on as blush and mascara, or Lurch using a vacuum cleaner to spread dust throughout the Addams Family mansion and taking a good ten seconds to croak out the words “You-u-u-u ra-a-a-ang?,” or 12-year-old Pugsley blowing himself up with a cherry bomb so that Gomez can say, “They blow up so fast these days!,” or Wednesday taking over a middle-school science class to play Frankenstein with her dissection frog, or Gomez walking into a coffee shop and saying, “Don’t let me interrupt your cup of Joe — or whoever you have in there!”

Jokes like these provoke a mild grin of amusement. Yet if the movie really wanted to run with how the members of the Addams Family are united in their antisocial dark glee, it should have turned them into flip superstars of demonic flamboyance; it should have made them into the Indreadables. And it should have invested their story with something to actually care about.

Instead, “The Addams Family” has a rote plot built out of bits and pieces from a lot of other animated films that had nothing to do with lumbering eight-foot-tall butlers or posh mistresses of the house who look like spindly vampiric cadavers. The movie serves up the standardized tale of an alienated tween — Wednesday, so pale and sad that she looks like a punk bowling pin, and voiced with winning disaffection by Chloë Grace Moretz. It throws in an impending Addams Family reunion built around the birthday of Pugsley (Finn Wolfhard), who as he turns 13 will celebrate his “mazurka,” a scared rite of passage that makes us think, “Funny, they don’t look Jewish.”

The movie combines all that with a battle against one of those conformist towns, like the city of awesomeness in “The Lego Movie” or the starliner Axiom in “WALL·E” or the Institute of Perfection in “UglyDolls,” that have become so satirically commonplace that they’re barely satirizing conformity anymore. They’re just mimicking it. The Addamses live in a haunted mansion on a hilltop in New Jersey, which they never leave, but below the hill is the prefab pastel paradise of Assimilation, presided over by a reality-TV Martha Stewart named Margaux Needler (Allison Janney), whose cascade of hair is larger than her personality, and who fixes her eye on the Addams house as the ultimate fixer-upper.

“The Addams Family” is a luscious piece of macabre design. The characters have been computer-drawn so that they’re exceedingly close to the ones in Charles Addams’ original cartoons, and the film is full of keen visual details like Lurch’s ancient cracked fingernails, or Wednesday’s pigtails braided like hanging nooses, or the army of spiders that comes scuttling out of Morticia’s dress to form a bridge over the bottomless pit in the basement. Cousin Itt gets voiced by Snoop Dogg as a hairball in pimp duds. Yet this kind of animated trope will take you only so far. The movie was directed by Greg Tiernan and Conrad Vernon, the co-directors of “Sausage Party,” which was an exuberantly accomplished R-rated bash, one that had a script (by Seth Rogen and Evan Goldberg, among others) that sizzled with an imagination as profuse as it was naughty; in its dirty-minded way, it had a vision. “The Addams Family” has an overly processed outré harmlessness. It’s so busy treating its famous domesticated ghouls as icons that it forgets to rediscover what’s memorable about them.