As a teenage kid in a superman's body, Zachary Levi is pure pop charisma in a comic-book saga that walks a deft line between satire and sincerity. 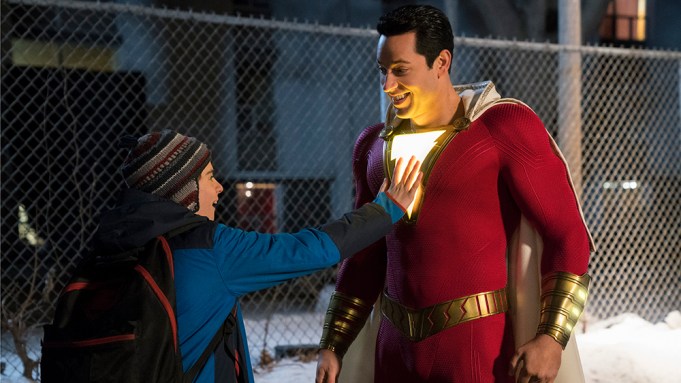 In “Shazam!,” Zachary Levi brings off something so winning it’s irresistible. He plays a square-jawed, rippling-muscled man of might, with a cheesy Day-Glo lighting bolt affixed to his chest, who projects an insanely wholesome and old-fashioned idea of what a superhero can be. But he’s also playing a breathless teenage kid on the inside, and the result of this body-morph balancing act is that the character, Shazam, is at once boyish and manly, wide-eyed and wizardly, ridiculously corny and heroically hip.

Levi, the 38-year-old actor best known for his roles on “Chuck” and “The Marvelous Mrs. Maisel,” has always seemed a bit on the generically handsome side, but in “Shazam!,” wearing a 1950s-looking red-spandex body suit set off by a white cape with gold piping that looks like a restaurant tablecloth, he’s a walking piece of pop art, with eyes that (literally) pop, hair so absurdly dark and lacquered it’s simply perfect, and a slightly abashed shit-eating grin that says, “I have no idea if you’re buying this, because even I can’t quite believe I’m a superhero.”

It’s the sort of look and attitude you could imagine an actor like Ben Stiller summoning if he were holding down the middle of a comic-book spoof. But the cheeky, balsa-wood trick of Levi’s performance is that he’s not making fun — he’s totally sincere. It’s just that he’s playing a superhero with a major case of imposter syndrome. At “Shazam!,” we seem to be watching a knowing satire of a comic-book film that is also, in every frame, the genuine article. The movie is dunked in mockery, but Shazam’s feats of amazement play as cosmic jokes mostly because they’re amazing to him.

The movie, directed by David F. Sandberg (“Annabelle: Creation”) from a screenplay by Henry Gayden, is built upon a fairly standard chassis. The hero, Billy Batson, is a street urchin, played by the winningly brash and ingenuous Asher Angel, who was abandoned by his teenage mother and has been through half a dozen foster homes by the time the movie gets rolling. He’s not a bad kid, just full of resentment at the raw deal he’s been handed. So when he lands in a shabby-cozy group foster home full of orphaned misfits, and does all he can not to fit in with them, he’s the mildest of rebels.

So is Freddy (Jack Dylan Grazer), the furious orphan with a disability who teaches Billy all about superhero lore. That’s a good thing, too, since Billy is soon pulled into the mystic cave of The Wizard (Djimon Hounsou), a bearded soothsayer looking for “the one soul who is worthy,” and Billy turns out to be that soul. He is chosen, as if by fate, to be Shazam, who he embodies as a junior Superman with a far more neurotic attitude.

“Shazam!” is hardly the first comic-book film to adopt a tone of breezy postmodern irreverence. The “Deadpool” movies, with their Mad-magazine snake-tongued nihilism, got there a while back, and before them there was Robert Downey Jr.’s ironic-quip-spewing Tony Stark, and if you go back to the 1978 “Superman,” part of that film’s timeless charm is that it was already too late in the 20th century to play Clark Kent’s Adonis-in-glasses stumblebum gawkiness entirely straight (and Christopher Reeve’s performance was pure screwball). “Flash Gordon,” in 1980, presented its space-jock hero as a delicious beefcake joke (the fact that you could scarcely tell whether Sam J. Jones was an actor or a high-school gym teacher was part of it). And then, of course, there was “Batman,” the ’60s TV series that started it all — a show that had its tongue planted so firmly in its face mask that it practically invented the mainstreaming of camp.

So there’s a great, grinning tradition of demigod-in-spandex movies that don’t take themselves seriously. But maybe the reason “Shazam!,” in its fluffy-tasty origin-story way, feels like a perfectly timed tonic is that the universe of comic-book movies — not just the Marvel Cinematic Universe, or the DC Extended Universe (of which this is technically a part), but the whole omnivorous universe of big-budget comic-book films that is now threatening to eat cinema, if not our souls — has grown so top-heavy with its own fateful importance. A few of the individual films are dandy, but they’re part of something larger that feels fraught and diffuse, with a too-muchness built into its aesthetic fiber.

“Shazam!,” on the other hand, is just a light, funny, grounded, engagingly unpretentious sleight-of-hand action comedy about a boy in a (super)man’s body. The movie, in other words, is “Big” in tights. And it’s Zachary Levi who makes that work, in much the same way that Tom Hanks did. Levi doesn’t play Billy as a callow kid; quite the contrary, he’s intelligent and jackknife fast. But Billy completely lacks an adult’s sense of guile, and Levi uses that innocent quality to take the superhero stuffing out of the material — and to let Shazam discover his identity in a way that makes this the freshest origin story in some time. There’s an infectiously witty montage, set to Queen’s “Don’t Stop Me Now” (a nod to the Queen-scored “Flash Gordon”?), in which Shazam tests out his powers in a series of YouTube-ready videos. Even though the powers themselves are standard (bullets bounce off him, he can fly, he hurls lightning flashes like Zeus tossing Frisbees), his experimentation of each feels unprecedented.

The villain in a movie like this one sets the stakes, and Mark Strong, as Dr. Thaddeus Sivana, is playing a bad guy who’s a misunderstood kid himself — in fact, the film’s entire opening chapter is devoted to his origin story. He’s a bald bruiser with a laser eye and a cauldron full of daddy issues. But mostly he’s just jealous that the Wizard didn’t pick him, and that envy has given him an obscene strength, whether he’s busting into a board meeting to toss his father’s executives out a skyscraper window or summoning the slithery ghost-goblins he commands as his personal army of Seven Deadly Sins: highly photogenic CGI monsters (the best has a tentacle for a tongue) who scarf people alive. Strong, a fine actor, brings a wounded humanism to this rotely outlined character. The climactic showdown between himself and Shazam, set at a carnival, is a pretty good duel of can-you-top-this FX, but the reason it works is that it always feels personal.

It’s no accident that the character of Shazam looks absurdly old-fashioned. He first appeared in the comics in 1939, and in the ’40s he reigned as America’s most popular comic-book superhero, outpacing even the Man of Steel. He was originally known as Captain Marvel (which is one reason he dwindled over time — the branding became understandably confusing), and when he was brought back in 1972, it was with an added wink of japery. “Shazam!” takes that wink and runs with it. Yet the fact that everything Shazam does, from taking bullets in the face to popping in and out of his superhero identity by barking the word “Shazam,” seems both valiant and slightly daffy is part of the film’s change-up charm. “Shazam!” suggests that if you’re taking a superhero’s powers deadly seriously, you may not be totally connecting with the spirit of the comics. The movie says: You’ve got to giggle at this stuff. That’s part of the adventure.