After a terminal cancer diagnosis, a man and his best friend embark on an unusual road trip in Alex Lehmann’s amusingly low-key dramedy. 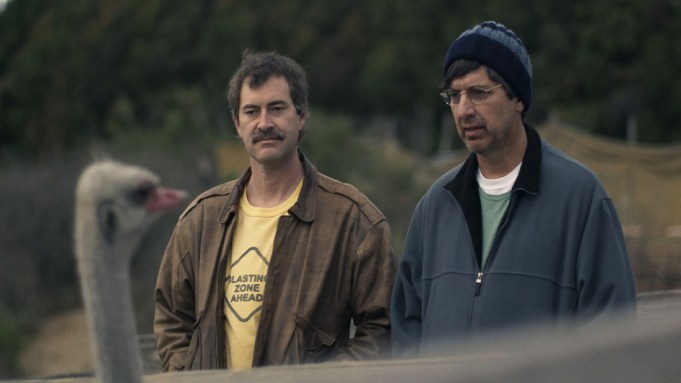 A movie about cancer has no right to be as consistently amusing as “Paddleton” — a triumph for which credit should be spread around, even if it most deservedly goes to Ray Romano. As a bachelor whose best friend is facing his final days, Romano infuses this otherwise downcast material with regular doses of humor, all of it expertly designed to reflect the roiling emotional roller-coaster upon which he’s been thrust. Locating both pathos and comedy in a raft of small grace notes, the film seems primed to find a sizable streaming audience when, after its Sundance Film Festival premiere, it arrives exclusively on Netflix in late February.

Reuniting director Alex Lehmann with his “Blue Jay” collaborator Mark Duplass (here serving as co-writer, producer and star, in the first of a four-picture deal with Netflix), “Paddleton” is almost exclusively a two-hander about Michael (Duplass) and his neighbor Andy (Romano), who lives above him in a dingy apartment complex. Michael’s fatal diagnosis is revealed immediately, and the action then focuses on the pair’s efforts to cope with the grave news. It’s far from an easy task, given that both are single men whose lives revolve around each other. From morning and evening greetings, to nights spent on the couch eating homemade pizza while watching their favorite kung-fu movie to playing a game they’ve created called paddleton — which involves batting a ball against the wall of a drive-in movie theater with a tennis racket in order to land it in a nearby barrel — they share a platonic bromance that’s comfortably low-key and foundational.

With unkempt, slightly graying hair and a ‘70s-era ‘stache, Michael takes his imminent demise in relative stride. Andy — sporting one of the worst helmet-head combovers in recent memory — is far more shaken. That becomes even more apparent when Michael decides to end his life via doctor-prescribed drugs. There’s a catch, though: The pharmaceuticals are only available hours away at a remote location. Instead of starting a debate about assisted suicide, this news initiates a road trip marked by a variety of absurd deadpan conversations, such as whether or not something can have too much air. (Andy answers in the affirmative: “How about the Hindenburg?”) Similarly droll conflicts arise, such as a credit card mishap at the drug store, whose pharmacist David (Kadeem Hardison) rubs Andy the wrong way; and a late-night hot tub session with a woman (Dendrie Taylor) who seems capable of bringing Andy out of his shell and teaching him to grapple with loss.

Lehmann’s direction is attentive and considerate, and his and Duplass’ insightful script goes light on contrivances. The film eschews corny plot twists for a more laid-back portrait of its two protagonists’ sweetly content rapport, in which jokey banter helps stave off genuine emotional confessions. Even a running gag about Andy’s desire to craft the greatest motivational football halftime speech is played for modest chuckles rather than a big emotional wallop. Both men’s humor is an articulation of, and defense-mechanism response to, their consuming grief, particularly in the case of Andy, whose heartache manifests itself most forcefully in his decision to lock Michael’s deadly drugs away in a pink child’s safe — much to the dying man’s frustration.

Lehmann strikes a generally stable balance between mirth and misery, with only a few minor missteps (such as an open-mic bar performance) along the way. Helping to achieve that equilibrium, the reliably natural Duplass embodies Michael as a man trying his best to confront his fate with a brave face, even as the reality of his situation draws painfully nigh. It’s Romano, however, who shines most brightly in a role that’s anything but glittery. Wracked with a soul-deep sickness he can barely mask beneath attempts at cheerfulness, his Andy is a schlub struggling to come to grips with the not only the departure of his only friend but also the destruction of the status quo that keeps his life bearable. In Romano’s hands, Andy is an ideal life partner, someone with whom to both laugh and cry — and, ultimately, to count on until the end.