With Maleficent no longer the villain of her own tale, this mistitled sequel reduces the character to a stylish pawn in a tacky 'Game of Thrones' ripoff. 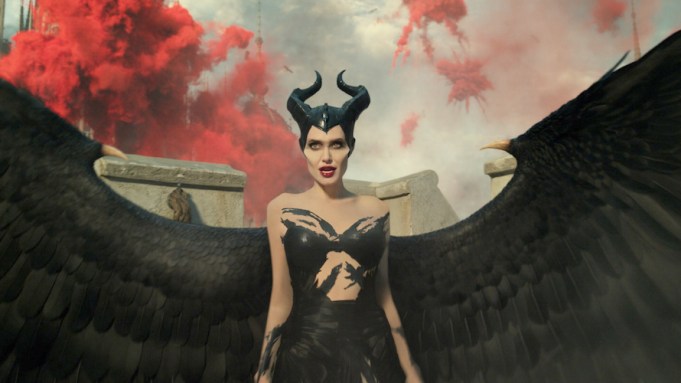 With her horned headpiece, impossible alabaster cheekbones and high-camp attitude, Maleficent looms as by far the most iconic villain Disney ever created. Landing Angelina Jolie to play the “Sleeping Beauty” baddie in 2014’s live-action redo was a dream-casting coup for which the studio was rewarded with three-quarters of a billion dollars at the global box office. That’s three-quarters of a billion reasons why the studio would want to dash off a sequel, although I can think of at least one why it should have reconsidered: The “Wicked”-like original went so far in its flip-the-script fairy-tale revisionism that the antagonist had essentially seen the error of her ways by the end — it was her kiss, not Prince Phillip’s, that awakened Aurora — leaving “Maleficent: Mistress of Evil” almost no way to live up to its title.

Picking up where the first film left off, Aurora (Elle Fanning) is now set to marry her betrothed (“Beach Rats” stud Harris Dickinson). Semi-comedically playing substitute mother to the bland young beauty, Jolie’s character gets dragged into a series of human interactions for which she is temperamentally unsuited, the equivalent of bringing the Big Bad Wolf to a little pigs convention. If Maleficent is not evil but merely misunderstood, as the earlier movie implied, then there’s a real risk that she ceases to be interesting — a mistake this “twice upon a time” follow-up exacerbates by focusing on the ridiculous weakness that affects the otherwise all-powerful “dark fey.”

As previously established, Maleficent and her kind are sensitive to iron, which effectively makes them vulnerable to one of the most common elements on Earth — though somehow rare in this parallel universe, where the toxin is harvested from “tune bloom” flowers that sprout from the graves of dead fairies. This inexcusably lazy Achilles’ heel means that a species treated as fearsome to humans is actually quite easily endangered (like the water-susceptible aliens in “Signs” or the sound-averse monsters in “A Quiet Place”).

Why would a lethal iron allergy even matter, you wonder? In a fit of world-building gone horribly wrong, screenwriters Micah Fitzerman-Blue, Noah Harpster and Linda Woolverton have taken “Sleeping Beauty” and given it an entirely unwelcome “Game of Thrones”-esque spin. The new “Maleficent” movie, even more than the last, is preoccupied with palace intrigues, elaborate conspiracies between rival species and an unhealthy obsession with war. Since when did Disney movies become so belligerent? To the extent that the studio’s classic fare has been blamed for brainwashing young girls into unhealthy gender roles, it’s a positive thing that Disney has toned down the emphasis on helpless female characters waiting to be saved by putatively charming princes, but this obsession with spectacular “Lord of the Rings”-like confrontations between CG fantasy creatures hardly qualifies as an improvement.

How far these “Sleeping Beauty” spinoffs have strayed from their roots! And how perverse that the franchise that gave us Disney’s best villain should now be responsible for the studio’s most disappointing villain yet: That would be Queen Ingrith (Michelle Pfeiffer), Aurora’s soon-to-be mother-in-law, a red-eyed, genocide-ready warmonger bent on destroying fairykind for good. Why does Ingrid hate magic folk? What does it matter? Her motives are nothing but a pretext to stage extravagant battle scenes — like the ones that clogged the third acts of Disney remakes “Alice in Wonderland” and “Oz the Great and Powerful” — in which audiences are expected to delight at watching flocks of winged fairies dissolve in midair as they come in contact with clouds of iron dust.

It makes me angry to think what Disney has done with its most beloved “properties” — to use the term that reduces these pieces of shared cultural heritage to exploitable commodities. Not all of the spinoffs and remakes disrespect the classics (which were also critiqued in their time for fidelity issues to their literary sources, as the animated “Sleeping Beauty” was in comparison to Charles Perrault’s and the Grimm brothers’ earlier tellings), and some have done wonders to extend the appeal of the Disney spirit to a new generation of audiences. Of these, Kenneth Branagh’s “Cinderella” is perhaps the most enchanting, while Tim Burton should be kept as far away from these projects as possible.

The earlier “Maleficent” was directed by a visual effects supervisor, Robert Stromberg, who focused on building out the film’s garish rococo world to the detriment of anything resembling elegant storytelling. Here, Norwegian director Joachim Rønning (one-half of the duo responsible for high-seas adventures “Kon-Tiki” and “Pirates of the Caribbean: Dead Men Tell No Tales”) takes the reins, and the results are only marginally more coherent, while remaining every bit as overcrowded in terms of the fairy-tale universe in which it takes place. If anything, Rønning pushes the design dimension ever further, traveling beyond the edges of the map to reveal a land where many more of Maleficent’s kind inhabit an “Avatar”-looking realm.

Discovering fellow fey Conall (Chiwetel Ejiofor) and a handful of diverse bat-winged warrior tribes mostly serves to dilute Maleficent’s incredible specialness. She’s no longer bad, and she’s no longer unique, making her merely fierce — which ain’t nothing. So long as Jolie plays the character, Maleficent remains a formidable screen presence, and here, she brings an all-new wardrobe of sexy fetish wear, including a bustier that appears to be made of shredded vinyl and a gauzy long robe that fades from her signature black to wedding-ready ivory. The Maleficent fashion show is in order, and Jolie shows up at her vampiest extreme to purse her lips, flash her fangs and arch her eyebrows as only a living cartoon character can.

Pfeiffer’s doing her best with a ridiculous role (for a sense of the missed potential, compare with the vain sorceress she played in “Stardust”), and Fanning gets to be a bit more proactive than previous princesses, but the story’s still a mess, and the world itself — buildings, costumes and creature-filled environments alike — amounts to an overworked eyesore, much too detailed for the brain to register, let alone take pleasure in discovering. It’s as if a small army of below-the-line artists have put so much effort into designing every magical butterfly and buttonhole that there’s no room left for our imaginations to take flight. Then smother it all with Geoff Zanelli’s frantically busy soundtrack, and the whole experience starts to feel oppressive.

Rønning is just doing the studio’s bidding, adding no discernibly personal statement or vision. The culprits appear to be producer Joe Roth (also responsible for the “Alice” movies) and screenwriter Woolverton, who had a hand in several of the studio’s most beloved animated classics (namely “Beauty and the Beast” and “The Lion King”), now reinventing others as bombastic CG showcases. “The story is not quite as you were told,” the narrator concluded at the end of “Maleficent,” and now we learn who was responsible for leaking the fake news and why. If America goes to war sometime in the next year, pundits will have a field day with this movie. But barring that, it’s just another ugly, unpleasant slog through a disposable fantasy universe. The true Disney villains in this case are off screen, sabotaging the studio’s canon from within.