Seth Rogen falls for Charlize Theron's secretary of state – who's way out of his league – in this undeniably funny but behind-the-times romantic comedy from '50/50' director Jonathan Levine. 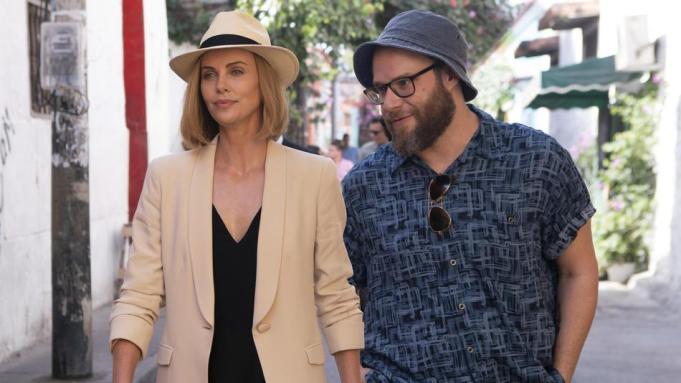 What if the woman who had been your babysitter when you were 13 years old went on to become secretary of state, and was now positioned to be the first female president of the United States? If you were Fred Flarsky (picture a Seth Rogen character more or less identical to every other Seth Rogen character, only beardier), this would be your carpe diem opportunity — the right time to go after that unrequited childhood crush (played here by Charlize Theron) and make her yours.

That’s pretty much the premise of Jonathan Levine’s “Long Shot,” a retrograde romantic comedy that somehow manages to pass the public’s #MeToo test at this precise moment — judging by the raucous audience enthusiasm at its SXSW Film Festival premiere — but is bound to embarrass everyone a year or so down the road, once the think pieces have picked it apart. More creepy than romantic, more chauvinist than empowered — and in all fairness, funnier and more entertaining than any comedy in months — “Long Shot” serves up the far-fetched wish-fulfillment fantasy of how, for one lucky underdog, pursuing your first love could wind up making you first man.

Hey, stranger things have happened. After all, France elected a president who married the high school teacher with whom he began an affair while still a teenager (he was a freshman, she was 25 years his senior). That just goes to show that not every politician is forced to pick his or her partner with constituency polls in mind. For Charlotte Field (Theron), however, such optics are the second-biggest concern of her upcoming bid for president. Topping the list, according to the Madison Avenue-style image consultant played by Lisa Kudrow, is the fact that she’s not perceived as funny enough for her voters — which, sadly, was probably true of the last secretary of state to run for office.

And so Field agrees to hire a comedy writer to punch up her speeches. As luck would have it, she runs into Flarsky — an unkempt/uncouth investigative journalist who infiltrates a neo-Nazi gang in the over-the-top opening scene, only to quit his job in the next — at a fundraising event where Boys II Men are playing. Why Boys II Men? Because you probably haven’t thought about them in a decade or so, and that’s the kind of nostalgic pop-culture reference that “50/50” director Levine knows exactly how to exploit in his most overtly comedic outing. (Later, Flarsky and Field will slow dance to the “Pretty Woman” soundtrack.)

At this point, “Long Shot” could have gone the direction of Mindy Kaling’s “Late Night,” which hits all the beats of a movie like “Love Actually” while delivering shrewd commentary on the country’s rapidly changing values. Society’s notion of what kind of romances are deemed acceptable is shifting awfully fast, so I could be wrong about this, but it seems pretty icky (and certainly no less than nepotistic) that Field would pass up more qualified speech writers in order to hire Flarsky — a flimsy pretext by which to explore whatever unrequited sexual tension existed between them 20-odd years before.

Is she wrong to do so? Well, her trusted advisers (June Diane Raphael and Ravi Patel) think so, trying to undermine and discourage Flarsky at every turn in hopes that he’ll quit. (One such gag, in which Field’s top aide overhauls Flarsky’s slovenly fluorescent-windbreaker wardrobe with a traditional Scandinavian suit — only slightly less embarrassing than lederhosen — makes for a side-splitting set-piece.) Meanwhile, it’s only a matter of time before Field makes her move on Flarsky, whose character demonstrates zero self-awareness, braying his opinions over those of everyone else in the room as only entitled white men can (the supporting cast carves out space for women and people of color, though Rogen constantly barges right over them).

Field finds his ramblings endearing, and maybe audiences will too, although there’s an alarming disconnect between whatever unconventional sex appeal Field sees in him and the immature (and prematurely excitable) slob Roger portrays. If the sexes were reversed, he’d be the dumpy girl with curly hair and glasses waiting for his mid-movie makeover. But because Flarsky’s a dude, he doesn’t have to change at all; it’s Field who has to make all the concessions to be with him — which would surely be a point of contention in a properly engaged satire.

“Long Shot” may unfold against the backdrop of high-level American politics, but the movie’s own values seem scandalously backward. This isn’t a gender-flipped version of “The American President” or “Dave,” which questioned who the commander-in-chief is allowed to date. It’s barely even on the level of Warren Beatty’s politically incorrect (yet eerily prescient) “Bulworth,” which boasted a then-scandalous relationship between a self-destructive senatorial candidate and Halle Berry as the gang-banger he contracts to assassinate him.

The only discernible reason Theron’s character was conceived as secretary of state — Hillary Clinton as Dior spokesmodel — is that the position puts her far out of Flarsky’s league. And yet, in a country where anyone can conceivably be president, are we really supposed to believe that voters wouldn’t accept Rogen as her partner? It’s 100% preferable to the only alternative the movie poses: Field’s staff want her to date the prime minister of Canada (Alexander Skarsgård, playing an effete, Frenglish-speaking caricature of our northern neighbors), arguing that such a pairing would be great for her image.

To its superficially feminist credit, “Long Shot” makes the joke multiple times that Charlotte Field (Theron) is expected to be almost perfect if she hopes to beat a male candidate in the 2020 election, explaining how words like “hysterical,” “irrational,” and “bitch” are levied against women for the same behavior that gets described as “being tough” for men. In casting Bob Odenkirk as the country’s doofus-in-chief, it presents one of the most hilariously inept presidents to appear on-screen since a wrestler occupied the Oval Office in “Idiocracy,” sparking a running joke about how America was dumb enough to elect an actor who’d played the president on TV.

“Long Shot” — which was written by some combination of “Girls” scribe Dan Sterling and “The Post” prodigy Liz Hannah — seems enlightened enough to recognize that Western society places impossibly high standards on a woman of Field’s ambition, although it’s not committed enough to change things. In an earlier incarnation, the film was called “Flarsky,” revealing where its allegiances lie. Technically, there are two high-concept male fantasies operating here: There’s the one in which a man-child finally gets to seduce the sexy babysitter, interwoven with another about the chances that the country’s most gorgeous/powerful woman — “I dreamed I was president in my Maidenform bra” — might risk it all to be with someone like Flarsky. The odds? The movie’s new title says it all.