If every generation deserves its own 'Little Women' adaptation, Greta Gerwig has done this one proud with a lively — if oddly nonlinear — retelling. 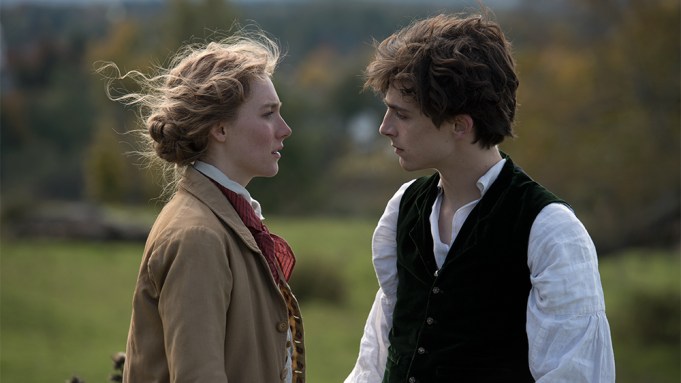 If there’s one thing I know about real-world little women, it’s that they will read “Little Women” no matter the era. That’s the timeless quality of certain literary classics, and Louisa May Alcott’s Civil War tale of four close-knit sisters continues to delight, feeling every bit as alive today as it must have 150 years ago. In that span, the novel has never gone out of print, and its popularity seems unlikely to fade in the centuries to come.

Movies, however, are another matter. Young people seem far less interested in watching films made before their birth, and for that reason, there will always be good reason to remake “Little Women.” After all, every generation deserves its own version. It’s been 25 years since Winona Ryder played Jo March, and 61 more since Katharine Hepburn tackled the role for George Cukor (the previous screen versions had been silent). Now, director Greta Gerwig has identified that it’s as good a time as any to dust off Alcott’s novel for a fresh interpretation while paying no mind to the fact that both Masterpiece Theatre and actor Clare Niederpruem saw fit to do the same in the two years since “Lady Bird’s” release.

As one might hope, Gerwig’s interpretation does right by the material, sticking to the original period and setting and assembling a dream cast to play the March siblings — Emma Watson as eldest sister Meg, the teacher; Saoirse Ronan as Jo, the writer and Alcott’s clear counterpart; Eliza Scanlen as Beth, the musical one; and Florence Pugh as Amy, impulsive and the artist of the family — and, in Timothée Chalamet, the perfect actor to embody the book’s curly-headed boy next door, Laurie.

Over the years, that role has gone to actors ranging from a pre-Batman Christian Bale (who first asked Ryder’s Jo to dance) to future “Rat Packer” Peter Lawford (in Mervyn LeRoy’s 1949 version) to Jonah Hauer-King (just announced as Prince Eric in Disney’s “The Little Mermaid” reboot), but Chalamet feels the Lauriest of Lauries: Doe-eyed and floppy-haired, alternately indolent and hyper-attentive, and so faithful as to seem almost fraternal, he plays the Marches’ devoted admirer as if channeling a young Daniel Day-Lewis — a connection younger audiences won’t make but older ones are sure to appreciate.

The irony of “Little Women” — in light of the title, which is how Mr. March (Bob Odenkirk), who’s gone off to war and left his wife and kids to fend for themselves, fondly refers to his daughters — is that it’s not necessarily for little audiences. Yes, the book was written at the pressure of Alcott’s publisher for young female readers, but Gerwig’s version doesn’t talk down in the slightest and may in fact play better with adults, especially those who find mainstream movies too salacious and immoral. “Little Women” is just the opposite: a wholesome, kindhearted tale of generosity and good manners, where malicious acts occasionally occur (as when Amy destroys Jo’s novel) but not nearly as often as acts of charity (like the time the March girls offer their Christmas dinner to a starving family down the road).

Rather than telling the story straight through, the way Alcott and her other adapters have, Gerwig opts to shuffle the scenes, telling “Little Women” almost entirely out of order, except for the Christmas letter from Father that opens the tale and the kiss that ends it. As in “Lady Bird,” she and editor Nick Houy keep things moving at a quick clip, though skipping around in time is a mistake, making a plot Gerwig must have considered too episodic, or else too melodramatic for her taste, even more so on both counts — as evidenced by the way that, in hindsight, it’s the emotional episodes we return to in our memories, rather than the overall arc of what happened to the March family.

Call me corny, but “Little Women” hooks me every time, in part because Alcott created such lively characters but also on account of the way she approached the institution of marriage. Alcott imagined the March sisters as independent-minded young ladies, despite their lack of wealth, free to pursue their own happiness in a world where women of their station often relied on either their fiancés’ fortunes or a generous inheritance to provide for their futures.

Early in her own adaptation, Gerwig zeroes in on the practical function matrimony plays in the story — calculated more for audiences than for the characters’ benefit — putting the explanation into the mouth of Jo’s editor, Mr. Dashwood (Tracy Letts, who, between this and “Ford v Ferrari,” has cornered the market on playing The Man this year): “If the main character’s a girl, make sure she’s married by the end. Or dead, either way.”

In the book, Jo has taken to writing potboilers, a word now sometimes mistaken for a compliment but originally intended to describe stories that bend to the taste of the masses, dashed off merely to keep food on the table — or in Jo’s case, to provide a bit of spending money to help her mother, Marmee (played by Laura Dern in a case of dream casting). The voice of maturity in a household prone to petty jealousies, Marmee is wise beyond words, and yet, her words are by far the movie’s best, whereas Jo’s serve to entertain. They also attract the attention of Professor Friedrich Bhaer, whose background has flipped from German to French in order to accommodate Gallic dreamboat Louis Garrel in the role. Friedrich is the only character who dares to criticize her writing, inspiring her to compose something more personal.

Alcott — who was similarly inspired by her own family, including the death of her younger sister, Lizzie — published “Little Women” in two parts. At the end of the first, none of the March sisters had married, although that wasn’t nearly as bold a declaration of their independence as Jo’s decision in the second volume (spoiler alert: skip to the next paragraph if you aren’t familiar with this 150-year-old story) to decline a proposal from the novel’s most fetching bachelor. Gerwig has rearranged the presentation of these events in such a way that we learn that Jo rejected Laurie before the two characters have properly been introduced, and the film proceeds in a curious fashion, jumping back and forth in time. In one segment, she groups the two instances that Beth falls ill, showing her recovering from scarlet fever in one scene, only to die several years later in the next.

Despite these emotional ups and downs, Gerwig’s script is far more comical than any previously committed to film. This she achieves by emphasizing the humor inherent in the source material, embellished slightly by Meryl Streep as the wealthy Aunt March, who plans to invite one of the daughters to accompany her in Europe, while pressuring all four to marry well. But while Aunt March represents the already old-fashioned notion of a young woman’s place in society, Marmee encourages her girls to choose their own paths. For Jo, that means turning the family history into a book, which makes for two original sequences in which the assertive protagonist becomes a stand-in for Alcott herself: Gerwig dramatizes a scene in which Jo negotiates the terms for publishing “Little Women” with Dashwood, and follows her manuscript through the printing process — a loving homage to an endangered art form.

After so perfectly capturing the frustrations of the contemporary teenager in “Lady Bird,” Ronan shifts easily back into period mode to play Jo, a reminder of her roles in “Brooklyn” and “Atonement.” Unlike Ryder, who’s such a thoroughly modern actor, Ronan seems to belong to some previous era, without coming across nearly so rigidly as Hepburn did in the role. A long way from her days as Hermione Granger in the Harry Potter movies, Watson portrays Meg as the sister who most knows what she wants, which makes the character’s choice feel like less of a compromise. Pugh has the tricky part, since so many find Amy’s personality off-putting, whereas she makes it possible to understand the difficulties of living in her sister’s shadow.

In terms of sheer logistics, “Little Women” marks a huge step forward for Gerwig, who shows an aptitude for future studio projects without sacrificing her distinctive directorial voice. Cinematographer Yorick Le Saux sustains the Currier and Ives-like look of Gillian Armstrong’s 1994 film while plunging us further into the characters’ midst than any of the earlier adaptations. In the end, this latest version doesn’t have to hold up for 60 years. It’s enough that it plays well today, and a plus if young people are still watching it whenever someone decides to remake it for the next generation of little women.