Emilia Clarke and Henry Golding are the appealing stars of a fairy-tale London romantic comedy that's too precious and contrived to take wing. 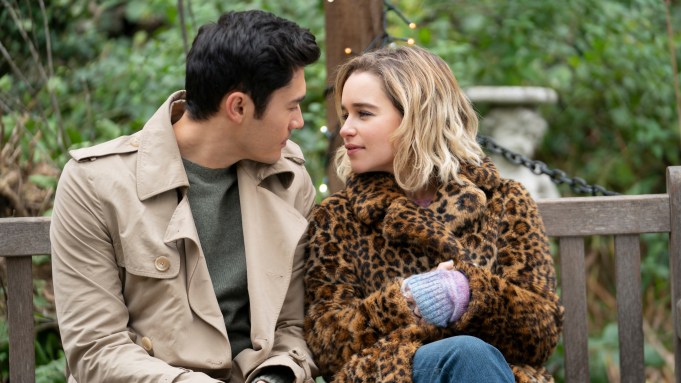 In recent years, the romantic comedy has taken a sabbatical, at least from the big screen (it seems to have adopted temporary legal-resident status on Netflix). Yet it’s clear that one can point to the occasional exception: the puckishly delightful and moving 2017 indie hit “The Big Sick,” or last year’s “Crazy Rich Asians,” which was such an immersive cross-cultural fairy tale of love, class, and global sci-fi-surreal decor that the shimmering romance at its center was just one of its many entrancements. Even in their success, though, you couldn’t say that either of those movies exactly re-opened the floodgates of romantic comedy. So what are love-starved moviegoers to do?

On paper, “Last Christmas” would seem to be just what the holiday rom-com doctor ordered. It’s got two terrific stars: Emilia Clarke, from “Game of Thrones,” a wild card of an actress who plays the likably slovenly and messed-up Kate, one of those characters who can squeeze a moment-to-moment ragged exuberance out of how little they have their life together; and Henry Golding, the elegantly charismatic co-star of “Crazy Rich Asians,” who plays Tom, a mysterious stranger who is sweet and gentle and perfect in every way — and is therefore somewhat less perfect than he appears, though we spend much of the film wondering how, exactly, that will turn out to be true.

“Last Christmas” was directed by Paul Feig, who also directed “Bridesmaids” (the finest romantic comedy of the century so far), and it was co-written by Emma Thompson and Bryony Kimmings (from a story by Thompson and her husband, Greg Wise), so it would seem to have the potential to be the kind of witty sparkling bauble we prize the genre for. In theory, the film has a number of things going for it — a spun-sugar atmosphere of confectionary longing, and the fact that it’s built around the songs of George Michael, an artist who should really be the subject of a jukebox musical (instead of “Jersey Boys,” you could call it “East End Boy,” and it could play for years), because his songs, even if you already love them, have a way of growing with time. “Last Christmas” opens in Yugoslavia in 1999, where Kate (or, as she was known then, Katarina) is singing the lead on Michael’s “Heal the Pain” in a church choir performance, and it’s gorgeous.

The other dimension of “Last Christmas” that feels promising is the fact that it unfolds in a rambunctious Yuletide version of London. In the three decades since the rom-com came roaring back, with the one-two-three punch of “When Harry Met Sally,” “Pretty Woman,” and “Sleepless in Seattle,” the genre, as it went through its ups and downs, was often saved by an injection of British sauciness. It happened in 1994, with “Four Weddings and a Funeral,” and in 1999, with “Notting Hill,” and in 2001, with “Bridget Jones’s Diary.” Sure, Hugh Grant starred in all those films, but it was about more than him — it was about the way that Andie MacDowell, Julia Roberts, and Renée Zellweger found stylish new ways of jousting, playing off that English blend of reticence and acidity, serving up the sentiment with a bittersweet edge.

And yet…as much as we go into “Last Christmas” eager to see a nicely wrapped package of acerbic fun, the film falls short of that. It’s not so much clever, toasty, and affectionate as it is the faux version of those things. It’s twee, it’s precious, it’s forced. And it’s light on true romance, maybe because the movie itself is a little too in love with itself.

Kate, who emigrated to England with her family from Yugoslavia to escape the terrible war there, now works as a clerk in one of those year-round Christmas boutiques. Her boss, played by Michelle Yeoh, calls herself Santa and drops quirky obscenities that the movie presents way too winkingly. Kate is the aggravating and adorable screw-up, who treats the customers like crap and keeps doing things like forgetting to lock the door at night, which allows a burglar to come in and trash the place. (That’s her karma.) But when she spies Tom outside the shop, gazing into the sky (it turns out he’s looking at a bird), she has found someone who can set her straight.

Tom is a dapper dude, so old-fashioned in spirit that he seems to dance when he walks. The two keep running into each other, and he turns out to be the kind of free-spirited, low-maintenance knight — he doesn’t carry a cell phone! he volunteers in a homeless shelter! — who’s like a parody of rom-com gallantry. But as much as I hate to say it, the whole movie plays like an unintentional parody of romantic comedy — it seems caught between flakiness and an out-of-date sort of whimsical sincerity.

Kate and Tom’s relationship consists of hanging out. And talking. And saying goodnight. And doing it all over again. There’s no conflict, no momentum, no dramatic-comedic spark plug. (But there’s a trick the film’s going to spring on you.) One of the ironies of the Wham! song “Last Christmas,” which obviously figures majorly in this movie, is that it became a Yuletide radio perennial even though it’s not really a Christmas song; it just sounds like one. (It’s a George Michael broken-heart song.) “Last Christmas” extends the irony by taking the lyrics so literally that when the movie does its big reveal, you’re not sure whether to swoon or collapse into vaguely annoyed giggles.

Kate, we learn, is such a scattered personality because she can’t stand her family, especially her mother, one of those noodgy Slavic matriarchs who speaks in an accent as thick as goulash and guilt-trips her children the way most of us breathe. Her name is Petra, and she’s played by Emma Thompson, who’s supposed to be so lugubrious she’s hilarious, but the only real joke is that we know, under the trappings, that it’s her. For a movie that comes on like it’s tweaking stereotypes, “Last Christmas” has a distinct tendency to stumble into them — like, for instance, the way it exploits the Michelle Yeoh character’s broken English, or treats Kate’s decision to volunteer at the homeless shelter as a signifier of her enlightenment (how 1980s!). Even a rom-com should have room for a wild feeling or two, but “Last Christmas” is an example of a romantic comedy that just about connects the dots, if not the sutures, to put its heart in the right place.