In Destin Daniel Cretton's supple and humane version of a true-life Hollywood liberal drama, Michael B. Jordan excels as a lawyer who arrives in Alabama and fights for innocent death-row inmate Jamie Foxx. 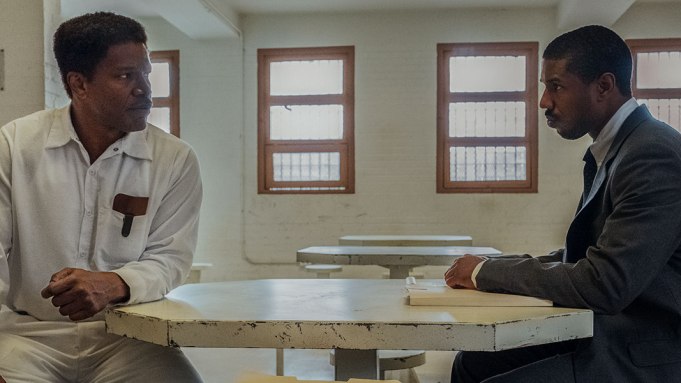 There’s a sequence in “Just Mercy” — one of many — that will shake you to your soul. It’s the late 1980s, and Bryan Stevenson (Michael B. Jordan), a young African-American lawyer in crisp gray suits and neckties, with a degree from Harvard, has come to stay in Monroe County, Alabama, to take on the cases of death-row inmates who are innocent. His most urgent client is Walter McMillian (Jamie Foxx), known as Johnny D., who was railroaded, in a flagrant way, for the murder of a teenage white girl. But Stevenson has other cases on his plate too, like that of Herb Richardson (Rob Morgan), who did commit the crime he was convicted of. He set off a bomb on a woman’s porch and killed her.

Stevenson has failed to win him a stay of execution, and now the moment of awful truth has arrived: Herbert is going to die in the electric chair. Rob Morgan, who plays him, looks like a sallow, morose Don Cheadle, and he uses Herb’s stutter to communicate an underlying melancholy. Herbert, a Vietnam veteran who lost some of his marbles in the war, isn’t trying to escape the crime he committed; quite the contrary, he’s drowning in guilt. Yet the prospect of death now looms over him with a certitude he finds surreal. “It’s different from ‘Nam,” he says with the blankness of defeat. “I had a chance there.”

On this day of his death, his head and eyebrows get shaved, which leaves him looking like an alien, and more people have been nice to him than on any other day of his life (which is, in its way, just as alienating). He’s twitchy, full of dread, a delicate ghost of a man. As he’s strapped into the chair, and “The Old Rugged Cross” plays over the prison’s sound system, and the prisoners use their tin cups to bang on the bars of their cells, the movie brings us disturbingly close to his terror. What we see is that it isn’t just the fear of dying. It’s the horrific realization that his death is part of a system of killing.

That system, with death row as a morbid extension of slavery, is what “Just Mercy” is about. The movie is a true-life legal drama, or maybe we should call it a civil-rights drama — though part of its special emotional texture is that Bryan Stevenson, in setting out to save the lives of men he thinks of as brothers, and to bring justice to a place where the rule of law is treated as a fig leaf for violence, is fighting for civil rights at the moment when America has moved on, dropping that battle from its headlines, as if the fight were no longer necessary. Been there, accomplished that! (Or so said large swatches of white America.) Bryan, from Delaware, has come to the Deep South to carry on the fight in the belly of the beast.

Early on, we see what happened to Foxx’s Johnny D., a man with a big mustache and his own lumber business, who got stopped by a police blockade and arrested out of the blue. He was convicted on the basis of testimony by a single witness whose story — that Johnny kidnapped him in his truck, left him alone, then came back, then drove over to a dry cleaner to commit the murder — was a pile of insane hogwash. In a classic drama of racial injustice, which “Just Mercy” both is and isn’t (the most powerful aspect of it is the way that it isn’t), the movie would consist of a steady drive toward truth, notched with a series of suspenseful surprises.

Yet in “Just Mercy,” director Destin Daniel Cretton, who made an indie splash six years ago with “Short Term 12” and has hardly been heard from since, finds a newly supple way to deliver a liberal Hollywood knockout punch. He lays out the facts of Johnny’s case early on, showing us the evidence of his innocence: the obscene (and absurd) lies told by the witness against him; the fact that Johnny, on the day of the murder, was at a fish fry all day long with his family, one that 20 witnesses could have placed him at; the fact that he was put on death row one year before his conviction, just so he could, you know, get used to it. (Yes, that really happened.) Other bits of information trickle in — like, for instance, the fact that the police didn’t choose Johnny at random; they had a classic (racist) motive for targeting him.

With the evidence more or less out in the open, “Just Mercy” can settle down into being the subtler drama that Cretton wanted to make: not just a portrait of injustice, but a movie that takes the temperature of the landscape — sketching in how racism works, treating the smallest encounters as expressions of a way of life, and portraying the victims as complicated folks whose thorny, jaunty personalities are a testament to what’s been lost in their imprisonment. Monroe County is where Harper Lee was from, and it’s one of the film’s motifs that all the residents enthusiastically recommend the “To Kill a Mockingbird” museum. It’s as if they don’t realize how, exactly, the book is about them.

As Johnny, Foxx reminds us why he’s a great actor. He plays this man with a Southern music in his voice, and with a cynical intelligence about how the society is structured: as a wall put up in the face of anyone black, especially if they’re poor. But even if they’re not. Early on, Johnny tells Stevenson that he’s already been through this with other lawyers, so why bother again? The poison they’re fighting is too entrenched.

But Stevenson has come to slay the dragon of the impossible. That’s what the civil rights impulse was — is — about. Jordan’s performance is quietly amazing. His Bryan doesn’t get angry, at least not on the surface. If you observed him from a distance, you’d say that he’s strictly business, keeping his eye on the ball (and on the prize). But, in fact, Jordan’s acting simmers with the force of someone who’s absorbed a thousand slights, a thousand insults, a thousand rages, and will reverse that karma by keeping his cool. Jordan delivers his lines with a quickening calm, acting with a lawyer’s mind, but his eyes tell a different story. They give off glints of fury and tears.

There are other superb performance in “Just Mercy,” and they help to give the movie a small-town Southern atmosphere that’s never less than authentic. Brie Larson, who came to prominence in “Short Term 12” (and also starred in Cretton’s second film, “The Glass Castle”),  plays Eva Ansley, a local who becomes the manager of Stevenson’s Equal Justice Initiative, and her antsy, cigarette-smoking defensiveness is just right. O’Shea Jackson summons an authority he’s never had before onscreen as Anthony Ray Hinton, another looming death-row martyr, and Karen Kendrick makes Johnny’s wife a cynical spitfire. And Tim Blake Nelson, as the yokel who perjured himself to convict Johnny, gives a major performance. With the side of his mouth hanging into a rubbery leer, the character is just blinkered enough to seem like a fool, and just clever enough to make you wonder what his foolishness is covering. (It turns out to be: raw fear.)

At 2 hours and 16 minutes, “Just Mercy” is long for a film of this sort, and there are moments you wish it were shorter. Yet if the cycle of courtroom battles at the end spins around facts we already know, what’s unpredictable is the human factor. The movie builds to a stirring resolution, based on the certainty that hatred, in all its terrible power, will never be as powerful as justice.