Fan favorites Dwayne Johnson and Jason Statham milk the friction between their characters while teaming up to save the world in this gratuitously over-the-top spinoff. 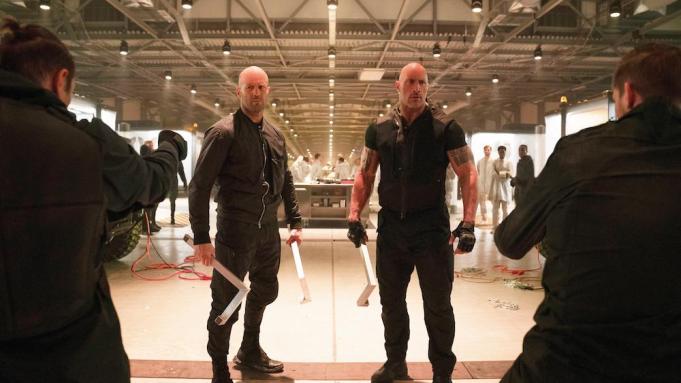 “Genocide, schmenocide,” growls Idris Elba through a mouth of silver-capped teeth in “Fast & Furious Presents: Hobbs & Shaw,” a line that pretty much summarizes where the film stands in relation to reality, the English language and what old-fashioned moral philosophers (like “Leviathan” author Thomas Hobbes) thought of as the respect for human life, and the insatiable thirst for power.

Here, in the extravagantly cartoonish ninth entry in the “Fast & Furious” franchise (sequel, schmequel, this is a stand-alone spinoff that requires no knowledge of the films that came before), Elba isn’t playing a human being, but whatever comes next: a kind of bionically upgraded cyber-villain with computer-enhanced eyeballs, bulletproof hands and an unwavering will to eradicate what this not-exactly-Shakespearean screenplay broadly describes as “the weak.” Elba, a gifted actor with a capacity for making otherwise tired genre characters feel fresh and vulnerable, puts aside that instinct to embody the uni-dimensionally menacing Brixton Lorr — or “Black Superman,” as co-writers Chris Morgan and Drew Pearce like to think of him, displaying once again their uncanny ability to boil complex concepts down to a pair of chuckle-inducing words.

For their purposes, “the weak” refers to everyone but Hobbs and Shaw, whose combined skill set represent James Bond (circa “Moonraker”), Ben Affleck-era Batman and the WWE star formerly known as “The Rock” rolled up in one. As fans of the franchise may recall, Hobbs is the conspicuously over-muscled Samoan behemoth (i.e., Dwayne Johnson) brought on to embody American law enforcement as far back as “Fast Five.” Jason Statham’s Shaw entered the picture in the next film as the vengeful older brother of Luke Evans’ character, a suave loner and cocky Mockney mercenary who switches allegiances however best serves the series’ ridiculously convoluted plots.

The previous movie, “The Fate of the Furious,” tossed these two in a high-security prison together and forced them to team up to … well, to sell more movie tickets. Now, in “Deadpool 2” director David Leitch’s hands, their combative chemistry has been filtered out, distilled and re-bottled as the main attraction. After helping fellow baldy Vin Diesel save the world, both characters have gone back to their respective corners: Hobbs rough-houses on behalf of the Diplomatic Security Service in Los Angeles (recognizable by its amber glow), while Shaw more elegantly humiliates miscreants over in neon-lit London, where something known as the Snowflake virus has gone missing in a heist that is loud, explosive and so astonishingly nonsensical, it basically demands that audiences switch their brains to the “off” position for all that follows.

You may enter a film like this one believing you had some grasp of how gravity works, or the human threshold for pain, or what constitutes a good movie, but the experience is so exhilaratingly mind-altering, so radically untethered from terra firma, you have to readjust your basic understanding of everything you know to be true in order to tag along for the ride. Speed equals distance over time? That elementary physics equation may hold up in school, but the only rule that applies here is the faster the movie goes, the more audiences are willing to suspend disbelief. The only ingredient allowed to slow things down is humor, in ample supply from both Johnson and Statham, which serves to further dismantle such pesky questions as “Wouldn’t that have killed him?” or “Why are we in Samoa again?”

Make no mistake: “Hobbs & Shaw” is fun, but it’s so ludicrously over-the-top, it makes the comic-book logic of your average Marvel movie look reasonable by comparison. Where it took the franchise’s ever-growing ensemble to thwart Charlize Theron last time around, the DSS and CIA have decided to force-partner that film’s most argumentative pair in tracking down what both agencies believe to be a rogue MI6 agent. Their target is none other than Shaw’s sister, Hattie (Vanessa Kirby), who had to inject herself with the Snowflake virus, lest it fall into Brixton’s hands. She alone knows what really happened, which is to say, that a “secret tech cult” known as Eteon wants to use the “programmable virus” — another howler from the script, intending to suggest that the movie’s blood-borne MacGuffin “can target any DNA sequence” — to wipe out humans and replace them with cyborgs.

This, my friends, is where we’ve arrived with the franchise that began 18 years ago as a glorified street racing movie. Now, none of the characters from the 2001 original remains, but the guy who launched his acting career as “The Scorpion King” (that same summer “The Fast and the Furious” first revved its engines) and one of the hoods from Guy Ritchie’s stable (hairless as far back as “Lock, Stock and Two Smoking Barrels”) are running around — from London to Chernobyl to Samoa — trying to stop robots from taking over the world, pausing only to flex their biceps and insult one another’s masculinity. If that doesn’t encapsulate the state of blockbuster cinema as we know it, what does?

That’s not to say “Hobbs & Shaw” should be viewed as some nadir of popular entertainment. Far from it. In stunt-guru-turned-helmer Leitch’s hands, the film is actually a highly accomplished cinematic feat, finding ingenious ways to convey its own ridiculously distorted ground rules such that audiences can understand the basic parameters of a sequence in a matter of seconds, dump whatever preconceived notions about how it might work in the real world and follow along with the exaggerated way the situation unfolds on screen.

For example, in one scene, Brixton blasts out the windows of a high-rise, kidnaps Hattie and rappels down its 40 or so floors with a pair of SWAT-suited henchmen. Shaw takes the elevator (why does the building have an external elevator, and why is it waiting at the same floor?), while Hobbs allows himself to fall down the sheer drop, landing on top of each of these goons in turn (what if he’d missed?). It’s an entertaining but insane set-piece for those who didn’t think Johnson had gone quite far enough with “Skyscraper,” apparently, and it’s just a taste of things to come, as these two characters multitask between bickering and blowing things up.

It’s no easy task for the film to keep outdoing itself, and yet the crazy, stunt-driven action scenes that follow each pose a similar challenge, asking audiences to immediately wrap their heads around an unfamiliar situation: the way Eteon’s entire high-tech arsenal works (such that it obstructs the good guys at first, but can later be hacked and overridden), the idea that Brixton’s computer-aided eyesight helps him dodge punches (while introducing the weakness that eventually brings him down), etc. Leitch’s visual-storytelling solutions aren’t necessarily elegant, but they’re extremely efficient, and when compared with, say, the last five movies to win best picture, there’s a sense that he’s doing more to advance film literacy — while bludgeoning all other aspects of our intellect in the process.

Such sophistication is only possible as a direct result of how far visual effects have come since the franchise began, allowing Leitch to stage “live action” scenes that would have previously only been possible as hand-drawn cartoons: a self-driving motorcycle that bends and folds around tight turns, a truck outracing a crumbling Chernobyl smokestack, a chain of four custom hot rods holding down a high-powered military helicopter. The violence, while explosive, veers equally far from the brutal, lethal-headshot style Leitch’s longtime collaborator Chad Stahelski pushed with their ultra-violent “John Wick,” making “Hobbs & Shaw” a more youth-friendly enterprise — even if the stakes are infinitely more horrifying.

In the end, the film’s stakes are less interesting than its potential. In a year when so many franchises are winding down — from “The Avengers” to “Star Wars” to “X-Men” — here’s one that’s expanding, and the film teases how that could continue from here. Series spokesman Vin Diesel has indicated that there’s a female-focused “Fast & Furious” stand-alone on the way, but this film hints at other avenues the team could take (spoilers ahead). It brings back Helen Mirren as Shaw’s mother, suggests that Eteon is masterminded by an old rival (represented only by a menacing digital voice for now) and introduces new characters in the form of Ryan Reynolds (who plays Hobbs’ erstwhile partner and self-anointed best friend) and Kevin Hart as an air marshall eager for some action. Don’t be surprised to see “Fast & Furious” presenting more of these characters down the road.