Tim Burton's live-action remake of the 1941 Disney classic about a flying circus elephant adds nuts and story bolts to a tale that didn't need them. 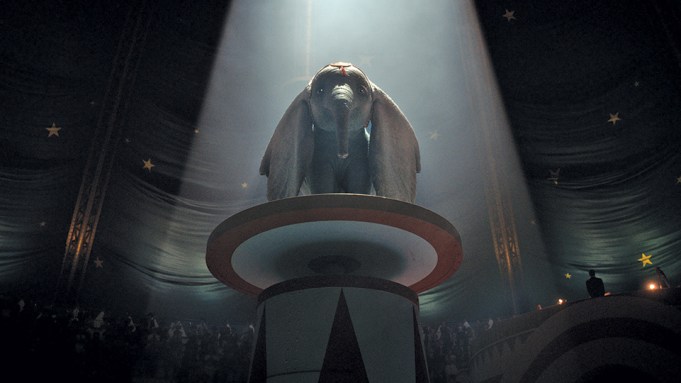 The key image in Walt Disney’s 1941 “Dumbo” is something out of a fairy-tale daydream: Dumbo, the baby elephant with long-lashed goo-goo eyes, a cuddly grin, and ears as long and floppy as wings, flapping those ears to soar around a circus big top, flying over the crowds with a freedom as touching as it is inexplicable. It’s one of the purest images in movies. “Dumbo” was Disney’s fourth animated feature (after “Snow White and the Seven Dwarfs,” “Pinocchio,” and “Fantasia”), and like Dumbo himself it’s a beautiful oddball — a solid-colored piece of stylized pop Americana, only 64 minutes long, at times almost a silent movie with sound effects. One of the more remarkable things about it is that Dumbo, after being cruelly separated from his mother (a primal twist that anticipates “Bambi”), doesn’t discover his ability to fly until the last six minutes of the movie. When he does, he becomes a creature as enchanted in his yearning and escape as King Kong up on the Empire State Building or E.T. hoisting a bicycle into the sky. In “Dumbo,” the magic of Dumbo’s ability to fly comes at the audience like a heavenly afterthought, one that tosses us into the sublime and leaves us there.

The flying sequences in Tim Burton’s “Dumbo,” a live-action reimagining of the Disney classic, have a touch of that same wonderstuck quality. Dumbo, now created with animatronic and digital effects, is still a cute, lonely pachyderm with impossibly large floppy ears who speaks to us with his soft pleading anthropomorphic Keane eyes (he has no dialogue.) When he’s slathered in clown make-up and forced to stand on top of a towering circus platform, his fear and humiliation are palpable. Then, after ingesting a feather into his trunk (the superstitious ritual that gives him the faith to fly), he plunges downward and takes wing, and for a few moments you feel your heart soaring along with his.

But in the new “Dumbo,” our hero’s happy-sad flights of fancy aren’t the emotional culmination of the movie; they start early on and happen periodically, to gradually lesser effect. A bulgy little elephant, as suffused with feeling as a silent-movie clown, lofting himself into the air: That’s still a marvelous image. But the new “Dumbo” is a meandering parable about the world’s attempt to corrupt it.

Dumbo, whose real name is Baby Jumbo, is born into a barnstorming circus run by the scuzzy carny barker Max Medici (Danny DeVito), who gets bought out by V.A. Vandevere (Michael Keaton), an entrepreneur in a silvery wig so ornate it makes Andy Warhol’s look organic. Vandevere believes in the go-big-or-go-home school of entertainment. The year is 1919, and his “circus” is really the world’s first theme park, a place called Dreamland that’s as packed with rides, exhibits, and chicanery as a small city. He’s not a showman; he’s an exploiter. He looks at Dumbo and sees a gold mine, and he doesn’t deliver the elephant’s gift in all its cracked glory so much as he squeezes the wonder out of it through packaging.

And that’s what this overly eager, fractious, Burtonized but standardized, loudly comic but ultimately rather mirthless remake does to “Dumbo.” It transforms a gentle and miraculous tale into a routine story by weighing it down with a lot of nuts and bolts it didn’t need. The character of Dumbo is still touching, but the tale of entrapment and rescue that surrounds him is not. It’s arduous and forgettable, done in busy italicized strokes, and apart from that FX elephant the movie doesn’t come up with a single character who hooks us emotionally.

“Dumbo” has the look and atmosphere of a “sincere” blockbuster that’s trying too hard. What it’s trying too hard to do, of course, is to justify its existence as another live-action version of a fabled Disney cartoon. Is there a reason to make a live-action “Dumbo”? As storytelling, no, but the reason behind all these films boils down to an addictive novelty: What will a live-action “Dumbo” look like? There’s a heady curiosity to that question, and a nostalgia factor too, combined with the fact that even people who have never seen the original film (in this case, that may be a considerable segment of the audience) may feel that they know the character in their bones, because he’s part of our collective pop imagination. So a film like “Dumbo” has that old-but-retrofitted, known-quantity-but-new-take recipe that so much of the Hollywood economy is now based on.

If only the retrofitting were more crazy-inspired. When you look at what separates a good Tim Burton film from one that adds up in the abstract more than it does onscreen, there’s an elemental yardstick: A Burton film that gels is almost always built around a personality wild and woolly enough to be irresistible. That’s why “Ed Wood” was a cracked masterpiece, why “Beetlejuice” and “Edward Scissorhands” are still dark delights, why “Batman,” driven by Jack Nicholson’s palm-buzzer bravura, left you jazzed while “Batman Returns,” with its conceptual gallery of rogues, didn’t, and why “Charlie and the Chocolate Factory” was a delirious remake and “Planet of the Apes” was a dud.

In “Dumbo,” Burton seems caught between the rote earnestness of Colin Farrell as Holt Farrier, a drawling big-top horse-rider who returns to the Medici Bros. Circus from World War I without his left arm, and with a couple of kids (Nico Parker and Finely Hobbins) to take care of (his wife died of influenza during the war), and the barely sympathetic broadness of Danny DeVito as Medici, a scruffy showman who oscillates between two modes: blaring and befuddled.

Keaton’s performance as the dastardly Vandevere is disappointingly thin; he’s a bad guy with a sandpaper voice but no layers. And Eva Green as Colette, his Parisian trapeze-artist paramour, has token flashes of pizzazz and a sympathetic aura, but that’s about it. Surprisingly, the Medici circus performers have almost no personality — just compare them to the ones in “The Greatest Showman,” a three-ring pageant of a movie that overflows with wounded-misfit feeling. You could say that the problem resides in the script, by Ehren Kruger, but the larger problem is that Tim Burton is using these characters to pad out his story. There’s no feeling of obsession in “Dumbo.” Burton should have dived much deeper into the circus-world Expressionist masochism that was there in the original “Dumbo.” But that was Disney back when the company was blazing trails in popular art. Now it’s blazing corporate synergies.

Burton uses the wistful lullaby “Baby Mine” from the original movie (there’s an Arcade Fire cover version over the closing credits), and he pays homage to the most off-the-hook sequence in “Dumbo”: the “Pink Elephants On Parade” surrealist musical number, a kind of trip-movie-in-miniature that you can see echoed in everything from “Yellow Submarine” to some of the more out-there Looney Tunes toons. Burton references it by staging a fanfare with giant glistening soap bubbles that turn into elephants — a pleasing effect, but the sequence doesn’t build or lead anywhere. It’s just eye-candy filler. And while Dumbo remains a touching character, I wanted the reunion the movie is working toward to be wrenching. (It’s more like, you know, nice.) “Dumbo” is no folly; it doesn’t leave you feeling cheated. But it’s not exhilarating either. It occupies a carefully tailored, underimagined middle ground where even an elephant who flies can come to seem, by the end, a figure of flamboyant caution.