As a Kree warrior who lands on earth and discovers she's not who she thought, Brie Larson lights up a Marvel superheroine film from within. 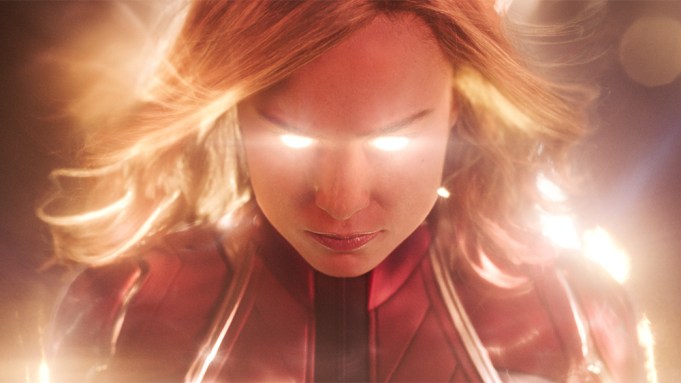 In “Captain Marvel,” Brie Larson radiates an ability that too many comic-book heroes never get the chance to show: the superpower of expression. She plays a Kree warrior, known as Vers (pronounced veers), who has been trained in the familiar comic-book-movie art of kicking cosmic butt (she specializes in leaping and flying martial-arts moves and the ability to deliver high-energy photon blasts). Yet what you can’t help but notice, apart from the slithery bravura of her combat skills, is the feeling she brings to the fight. When she’s up against a gang of Skrulls, with her forearms locked inside a pair of molten cylinders, she’s game as hell, but then the cylinders come off, and it sparks a righteous “Yeah!” and a grin of triumph. Larson seems to be saying: It’s a Marvel movie! If we’re not having an otherworldly blast, what’s the point?

But then she lands on Earth (or, as it’s referred to in the film, Planet C-53), and it’s here that the emotional vibrance of Larson’s presence really kicks in. Vers has a bunch of memories of having been on Earth — of being a Top Gun fly-girl, partying with her Air Force cronies on karaoke night and listening to an obnoxious stud-pilot tell her, “You do know why they call it the cockpit?” Were those memories implanted in her, or are they something real that she’s repressed? The basic premise of “Captain Marvel” — a gifted figure from a distant galactic sphere lands in Los Angeles — carries echoes of “Thor,” “Superman,” and many a past Spandex saga. But this isn’t another über-fish-out-of-water comedy. It’s closer in spirit to the last Wolverine film — a desperate tale of identity, with Vers honing her powers by working to figure out, along with the audience, who she actually is.

She thinks she’s a Kree, and even though they’re led by the scowling and dyspeptic Jude Law as Yon-Rogg, who is Vers’ mentor, the Kree are set up to be the rough-and-tumble good guys. The Skrulls are the scurrilous interlopers: green-skinned, lizardy elfin-eared shape-shifters, led by the wily Taros (Ben Mendelsohn), who could be impersonating just about anyone, including your closest ally. The battle lines seem clearly drawn.

As “Captain Marvel” goes on, though, the loyalties get reconfigured in ways you don’t expect. Vers is pulled into the drama of questioning the core of who she is, and that’s where Larson’s performance takes wing. Vers was taught one thing: to fight this way, for these people, for this cause. She needs to open herself up to a bold new mode, and the film uses that transition as an analogue of her existence as a female superhero. Everything she’s been told is wrong! Can she wake up from the oppressive (read: patriarchal) mind-set of the conventions that bind her? “Captain Marvel” is only the second major Hollywood movie to feature a female superhero at its center, but it’s a savvier and more high-flying fantasy than “Wonder Woman,” because it’s the origin story as head game. Larson’s Vers is like someone trapped in a matrix — she has to shake off the dream of who she is to locate the superwoman she could be. And that makes for a rouser of a journey.

The movie was directed and co-written by the team of Anna Boden and Ryan Fleck (“Half Nelson,” “Sugar,” “Mississippi Grind”), and I’m not sure if there has ever been a case of filmmakers this indie commandeering the pop-art canvas of a Marvel movie. Boden and Fleck are low-key American neorealists, and in “Captain Marvel” they barely retain a vestige of their signature style. Yet they have brought off something exciting, embracing the Marvel house style and, within that, crafting a tale with enough tricks and moods and sleight-of-hand layers to keep us honestly absorbed.

The movie is set in 1995, when S.H.I.E.L.D. is just a budding task force and the Avengers are barely a gleam in the eye of Nick Fury, played by a digitally de-aged Samuel L. Jackson, who is done a surprising favor by the visual trickery. He seems different than usual — lighter and perkier. Boden and Fleck have fun digging into the nostalgia of this particular distant-yet-not-so-ancient moment, when Blockbuster and RadioShack outlets dotted the landscape, “Whatta Man” and “Just a Girl” ruled the airwaves, and early digital culture was all CD-ROMs and Internet cafés.

The movie takes us back to a spectacular accident that’s like a superhero primal scene: Vers and her superior officer, Lawson (Annette Bening), crash-landing in the desert, where Vers, confronted by an alien force, blows up the energy core that was Lawson’s experimental light-speed project — the eruptive accident that gives Vers her powers. And what we learn, of course, is that she was and still is Carol Danvers (hence the Vers), one of the Marvel heroines of legend. Yet she didn’t destroy the energy core. It is, in fact, the Tesseract, the light box that will figure into the Avengers saga.

Back on earth, Carol finds a kind of family in her old fly buddy Maria Rambeau (Lashana Lynch) and her daughter (Akira Akbar), and also in a new set of alien comrades, who lend the movie a surprising touch of soul. “Captain Marvel” doesn’t do anything revolutionary; it’s been crafted as another clockwork piece in the Marvel puzzle (the 21st MCU film). It’s a prequel that casts its gaze way forward. Yet in its sturdy and standard-issue way, it invests Carol Danvers with a heroic majesty and heft that moves her, as a presence, right to the forefront of the series. The climactic sky battle is a spectacular vision, a “Star Wars”-style dogfight that takes place over sun-washed canyons, and Carol herself becomes a heroine suffused with light. She doesn’t gain any powers, but she learns, at last, how to harness them by listening to something new: the light within.