High school good girls Beanie Feldstein and Kaitlyn Dever give 'Superbad' a run for its money in this uproarious nerds’-night-out comedy from actress-turned-director Olivia Wilde. 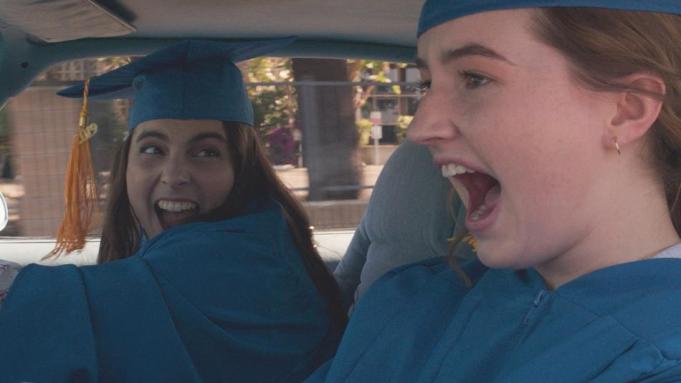 “Booksmart” besties Molly and Amy pretty much aced high school: Valedictorian and student-body president Molly (Beanie Feldstein, who is Jonah Hill’s sister) got accepted to Yale, her top-choice university — and the first step in her goal of becoming the youngest Supreme Court justice — while study buddy and super-activist Amy (Kaitlyn Dever, “Justified”) plans to spend some time volunteering in Botswana before continuing her studies at Columbia. Looks like all those late nights at the library paid off! Except that somewhere along the way, these two were so busy worrying about their futures that they missed out on being teenagers.

That realization strikes when Molly, ducking into a super-skanky school lavatory where the graffiti is funnier than your average high school movie, overhears three presumed burnouts trash-talking her. Confronting them, she discovers that through some grave karmic mistake, two are headed to top schools and the other has landed a mid-six-figure job at Google. “This is not possible!” Molly protests. “You guys don’t even care about school!” To which the more popular girl snaps back, “No, we just don’t only care about school.”

And so, now, on the last night of their high school careers, Molly and Amy aim to cram everything they missed into one, unforgettable night: crashing a wild house party, taking hallucinogenic drugs, projectile vomiting on a possible soul mate, and — for one lucky overachiever — spending the night in jail. None of this is what you’d expect from the directorial debut of actress Olivia Wilde, who cracked Harvard grads Emily Halpern and Sarah Haskins’ script, which had been kicking around Hollywood for nearly a decade (it was featured on 2009’s Black List, and has since been finessed by Katie Silberman, Susanna Fogel, and the director).

Comedy is hard, and doesn’t get a lot of respect within the industry, but Wilde saw that something was missing from the crowded field of R-rated end-of-innocence comedies: These high-scoring young ladies not only routinely ruin the curve for their fellow students, but they also pass the Bechdel Test with ease. Instead of reinforcing the same tired values that male directors have been peddling for years — where boys obsess about losing their virginity, freely objectifying the girls in their class — “Booksmart” matter-of-factly introduces one of its leads as a lesbian while presenting a view of female sexuality in which men are incidental. What’s more, the film rejects the notion that conquests ought to be so central to coming-of-age stories, delivering a romp that’s every bit as outrageous as “American Pie” or “Porky’s” while shifting its focus away from hookups (these ladies will undoubtedly find far more deserving partners in college) to whether their friendship can withstand such a wild and crazy night.

Not since “Superbad” has a high school comedy so perfectly nailed how exhilarating it feels to act out at that age, capturing the thrill of making a series of potentially irreversible mistakes with the person who’s always been there for you, even as it acknowledges the inevitability that said confidante can’t be your wing-woman forever. Granted, the all-summer-in-one-day device has been done before, and “Booksmart” is hardly the first film to portray such adolescent recklessness from a female perspective: “Clueless” and “Easy A” gave classic literature a contemporary spin; “Mean Girls” and “Blockers” revealed just how much dudes like Cameron Crowe and John Hughes didn’t know about women.

“Booksmart” fills in those gaps, and also gives the good girls a chance to act out. Besides, every generation needs its own rowdy high school comedy, and millennials deserve one that treats the anxieties teens have been grappling with for millennia with the same urgency that Jerry Bruckheimer would bring to a high-stakes action movie. Once Molly and Amy commit to crashing the night-before-graduation party where all the cool kids are going, “Booksmart” takes off with the nitro boost of a “Bad Boys” sequel — leaning on a hip-hop soundtrack that’s infinitely cooler than its characters to supply much of its energy. Like Will Smith and Martin Lawrence, or any other pair of wisecracking BFFs, these two young women totally have each other’s back — and good thing, too, since most of their classmates find their brainier-than-thou attitude insufferable.

Rather than admonishing nerds with some lecture about priorities, or coming straight out and telling teens that it’s OK to make mistakes en route to responsibility, “Booksmart” demonstrates that even know-it-alls like Molly and Amy have a lot to learn. That’s what’s so endearing about the film’s central pair: They use their intelligence to overcompensate for an assortment of other insecurities, rapid-firing the kind of useless trivia that would make them ideal “Jeopardy!” contestants, but confess ignorance when it comes to the basics — like the birds and the bees, or what to wear to a house party.

Determined to figure out where the event is happening, Amy suggests, “Let’s do what we do best: homework!” And it’s off to the library to find the address based on the available clues. Still, it doesn’t take a perfect SAT score to realize that these two use humor, and a certain snarky condescension toward everyone else, to make up for their own social awkwardness. There are no bullies at Crockett High School. If anything, Molly and Amy are the ones who routinely make others feel inferior, and their stream of put-downs — directed at mouth-breather Nick (Mason Gooding), or snappy overdresser George (Noah Galvin), or slut-shamed Triple A (Molly Gordon) — are both uncalled for and hilarious.

Still, for all their book smarts, Molly and Amy may actually be remedial when it comes to common sense, scoring far higher in IQ than EQ. That makes for some pretty entertaining situations, whether trying to sneak past Amy’s folks (Lisa Kudrow and Will Forte) or attempting to extort a pizza delivery guy (Michael Patrick O’Brien) for directions to the party. Other familiar adult faces in the cast include Jason Sudeikis as the principal who supplements his income by driving a Lyft and Jessica Williams as the teacher everybody loves who crosses a line with one of her students.

There’s not a weak link in the ensemble, although none of it would have worked if not for the chemistry between the two leads. Feldstein, who was one of the highlights of “Lady Bird,” shares older brother Jonah’s gift for physical comedy. Dever’s past credits have been more dramatic in nature (“Short Term 12,” “Detroit”), but her more introverted performance offsets Feldstein’s energy nicely. Dever also sells the emotional dimension of two key scenes without her co-star in which her groundbreaking character, who came out her sophomore year, finally musters the courage to flirt.

Credit Wilde — who quietly practiced on a couple of shorts prior to this — for sustaining both the laughter and the energy throughout, and for pulling off several bold surprises along the way, including a stop-motion sequence that employs Barbie-like figurines to unexpectedly empowering effect. In this year’s class of first-time feature directors, Wilde handily earns the title of Most Likely to Succeed.