After the must-see showdown that was 'Infinity War,' the Russo brothers deliver a more fan-facing three-hour follow-up, rewarding loyalty to Marvel Cinematic Universe. 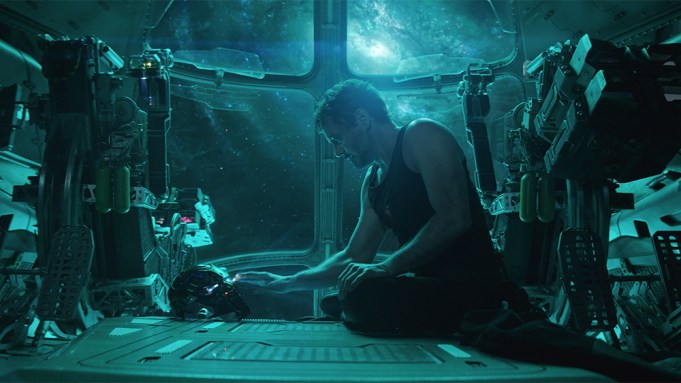 The culmination of 10 years and more than twice as many movies in the Marvel Cinematic Universe, “Avengers: Endgame” promises closure where its predecessor, “Avengers: Infinity War,” sowed chaos. That film — which revealed that the cookie-cutter uniformity of all those MCU movies had been part of an unprecedented master plan — infamously wrapped with a snap: a gesture that, when performed by a supervillain armed with the six Infinity Stones, was capable of wiping out half of all life in the universe.

Audiences have had a year to mourn the loss of Spider-Man, Star-Lord, and Black Panther (whom they’d only just met two months earlier), and to nurture theories as to where directing siblings Anthony and Joe Russo might steer things from here. Maybe all those characters weren’t really dead. Maybe the remaining Avengers just needed to travel inside the Soul Stone to get them back. Or maybe “Avengers: Endgame” would have to resort to that most desperate of narrative cheats — time travel — to undo the damage caused by Thanos (the purple-skinned, multi-chinned baddie so compellingly performed by Josh Brolin).

The element of surprise and the thrill of discovery are everything in these movies, so every attempt has been made to minimize spoilers. Yes, “Avengers: Endgame” is the most expansive film yet, and yes, it strives to provide emotional catharsis for several of fans’ favorite characters. It’s even safe to say that “Endgame” shifts the focus from extravagant, effects-driven displays of universe-saving — manifold though they remain — to the more human cost of heroism, which comes at great personal sacrifice.

That said, readers should also be warned that “Avengers: Endgame” hinges on the most frustrating of narrative tricks, and that no meaningful analysis of the film can take place without delving into some of the choices made by the Russo brothers and screenwriters Christopher Markus and Stephen McFeely. If “Infinity War” was billed as a must-see event for all moviegoers, whether or not they’d attended a single Marvel movie prior, then “Endgame” is the ultimate fan-service follow-up, so densely packed with pay-offs to relationships established in the previous films that it all but demands that audiences put in the homework of watching (or rewatching) a dozen earlier movies to appreciate the sense of closure it offers the series’ most popular characters.

To the extent that it has all been leading up to this, no franchise in Hollywood history can rival what the Disney-Marvel alliance has wrought, although “Avengers” would not be what it is without the three-films-over-three-years scope of Peter Jackson’s “The Lord of the Rings” trilogy, the coming-of-age continuity of Warner Bros.’ eight-part Harry Potter saga, or the 21st-century shift of serialized television to expansive, ensemble-driven narrative. Each of those experiments in cumulative, multi-part storytelling served to test just how far audiences would go to follow characters they love over time. But nothing — not the horror of Han Solo frozen in carbonite, nor the shock of James Bond’s wife murdered at the end of “On Her Majesty’s Secret Service” — could prepare fans for the Snap, and the pain of watching half the heroes they’d gotten to know turned to dust at the end of “Avengers: Infinity War.”

The opening scene of “Endgame” revisits that unbearable moment from the point of view of Clint Barton, aka Hawkeye (Jeremy Renner), who sat out the previous battle to spend time with his wife and kids, such that the agony he feels in watching them vaporized by the Snap will come to stand for what all living things must experience as they witness their friends and family disappear.

Meanwhile, Tony Stark (Robert Downey Jr., looking frail) and Thanos’ daughter Nebula (Karen Gillan), now begrudgingly “good,” are drifting somewhere out in space when they encounter Captain Marvel (Brie Larson) hovering outside their cockpit. That’s not quite how a “Captain Marvel” end-credits vignette teased her joining the Avengers — which involved a pager signal sent by her human ally, Nick Fury (Samuel L. Jackson) — but “Endgame” has so much ground to cover in the span of three hours that it breezes past introductions and treats her arrival as a fait accompli, racing to its first confrontation with Thanos, who has banished himself to a remote garden planet with his gauntlet.

That showdown doesn’t go at all as audiences might expect, but establishes that whoever holds those six all-powerful Infinity Stones can achieve pretty much whatever they want simply by snapping their fingers — with one major problem: Thanos has destroyed the stones. That means the universe is stuck like this unless someone invents time travel.

Spoiler alert: Someone invents time travel — which feels like a skill so far beyond the reach of modern science that maybe it should’ve qualified as a superpower and, if memory serves, might even have been among Doctor Strange’s abilities, except that the super-wizard (played by Benedict Cumberbatch) was one of the casualties of “Infinity War.” Before surrendering his Infinity Stone, Doctor Strange projected himself forward in time to view all possible outcomes of the Avengers’ uphill battle, reporting back that of those 14,000,605 alternate futures, only one resulted in victory over Thanos.

“Infinity War” may have gone badly for the Avengers, but the odds are pretty good that “Endgame” will yield that one possible happy ending, even if it means permanently having to say goodbye to certain characters — or at least, to certain actors in those roles, as we have already seen creative reboots of Spider-Man, Hulk, and the X-Men at other studios. And now that Ant-Man (Paul Rudd) has demonstrated the potential for time travel at the quantum realm — a solution teased over the end credits of his last outing — the Avengers are free to buddy up and jump through time to collect the Infinity Stones before Thanos can get to them, at which point they can make their own gauntlet and snap things in and out of existence.

The Russo brothers dedicate an inordinate amount of time to convincing the heroes that the mission is worth trying, which may have worked in “The Magnificent Seven” but asks us to accept that, after shoving two or three of these Marvel movies down our throats a year, somehow everyone has sat idle for half a decade, crushed by depression and defeat. Still, the five-year flash-forward — a trick borrowed from the “Battlestar Galactica” playbook — allows for significant, and in some cases amusing, changes to Iron Man, Hulk (Mark Ruffalo, who’d had trouble transforming when last we saw him), and Thor (Chris Hemsworth, still plenty sarcastic but looking the most different).

But here’s the thing about using time travel to solve their problems: As soon as screenwriters open the door to that device, then any sequel can undo whatever came before. Here, War Machine (Don Cheadle) makes the suggestion that they go back and strangle Thanos in the crib, which the film treats as a joke, and yet, it sounds like a better idea than the “time heist” they have in store. Alternately, they could wait for Thanos to hijack all six Infinity Stones and then jump in and prevent him from using them.

Frankly, there are 14 million better ideas out there, but this one is designed to yield the maximum number of surprising twists, amusing confrontations, and bromance-y bonding moments between mismatched partners (like Thor and the Bradley Cooper-voiced space raccoon Rocket). The plan also allows the surviving Avengers to revisit scenes from the earlier films, watching their younger versions — as well as fallen comrades — from another angle, and in two very different cases, facing off against his or her past self.

To the film’s credit, it’s not the casualties, but the chances these heroes have to go back and say things to those they’ve lost that resonate as the most emotional scenes in “Endgame”: Iron Man, Thor, and Captain America (Chris Evans) each get such opportunities, any one of which would’ve been worth the price of admission. Still, all that time travel creates a host of paradoxes that will keep the geek debates raging for years: What happens if your “former future” kills an earlier, alternate version of yourself? If every change creates a “branch reality,” what kind of outcomes are in store for the universe in all those new paths? And why, if one has all six Infinity Stones in his possession, is snapping even required to set one’s wishes in motion?

By this point in the franchise, audiences have come to expect a top-of-the-line experience: iconic costumes and sets, stunning visual effects (including convincing computer-generated characters, like Thanos and Hulk), cinematography that alternates smoothly between epic clashes and nuanced character moments, and rousing music that underscores both the peril and the sheer importance of it all. Like “Infinity War” before it, “Endgame” delivers these elements at a higher level than Marvel’s less expensive — and considerably less expansive — lone-hero installments. But there’s something considerably less elegant to the storytelling this time around.

If “Infinity War” built inexorably to an “inevitable” conclusion (as Thanos arrogantly describes his victory), that was made possible by the filmmakers’ daring choice of positioning their villain as a deeply unconventional protagonist: It was Thanos who undertook the “hero’s journey” of that film, wildly outnumbered by the Avengers in his quest to amass the Infinity Stones. Here, the equation is reversed, with a surfeit of heroes now splitting up to repeat more or less the same mission, with only one adversary to oppose them (even with the Avengers’ ranks reduced by half, there are still too many to keep straight, while the prospect of reviving any of the fallen only makes it more unmanageable).

It works because the creative team has taken note of what audiences want (Black Panther! Captain Marvel!) and what the culture at large is asking for (more diverse representation all around), crafting brief but impactful moments along the way. If these Avengers movies are like massive symphonies, then the conductors have taken care to give nearly everyone a standout solo, however short — or, in the minute that played best at the film’s premiere, a group shot that gathers all the female Avengers, and proves that had Thanos’ snap wiped out just the dudes, the remaining women would’ve been awfully formidable on their own. However satisfying — and necessary — these vignettes may be, is it still art when a movie seems so transparently reverse-engineered according to audiences’ appetites, or does that make “Endgame” the ultimate pop-culture confection?

After nearly two and a half hours of hardcore comic-book entertainment — alternating earnest storytelling with self-deprecating zingers designed to show that Marvel doesn’t take itself too seriously — “Endgame” wraps all that logic-bending nonsense with a series of powerful emotional scenes. Whereas all the casualties suffered at the end of “Infinity War” felt suspiciously like a gimmick that would be undone in this film, these meaty character moments illustrate the spirit of personal sacrifice certain individuals consciously make on behalf of the team, and the universe at large.

Time and again, “Endgame” makes the point that family matters, whether that means biological ties — as Iron Man, Hawkeye, Ant Man, and Thor have experienced — or those forged by duty. The final takeaway from this decade-long journey is that heroism isn’t defined by bravery or super-abilities, but by what one gives up for the greater good. Among the many frustrations of the Snap was that it robbed so many great characters — and gazillions of anonymous creatures throughout the galaxy — of proactively making that choice. “Endgame” isn’t exactly a do-over, but it builds to an infinitely more satisfying conclusion.