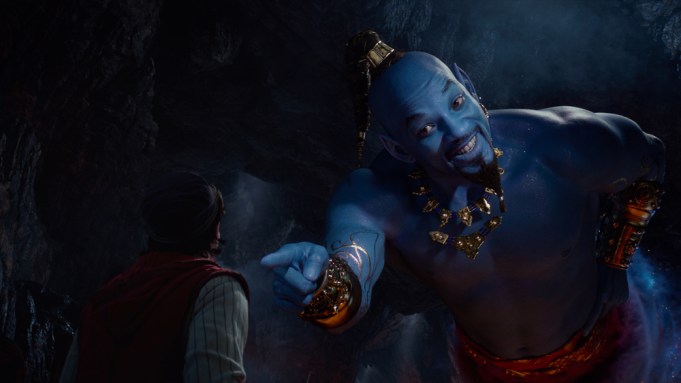 Of all the characters in Walt Disney Studios’ canon, is there any more animated than the Genie from “Aladdin”? In 1992, old-school cartooning seemed the only way to keep up with comedian Robin Williams’ rapid-fire sense of humor and free-associative gift for improvisation. Much of the appeal of the original “Aladdin” came thanks to the ingenuity of its animators, led by Eric Goldberg, who used the medium to transform the mile-a-minute wish-meister before our eyes — as in one memorable moment when he cycles through caricatures, from William F. Buckley Jr. to a Marine Corps drill sergeant, kissy-lipped Yiddish bubbe, and back-from-the-dead Peter Lorre. The beloved charater’s elastic quality makes “Aladdin” perhaps Disney’s most daunting live-action adaptation yet, to say nothing of how Hollywood’s growing awareness of representation issues renders the original highly “problematic.”

Without Williams, or the near-infinite flexibility of hand-drawn animation, the challenge becomes how to translate such an elastic character to the world of flesh-and-blood actors. Instead of casting another white actor to play a character in an Arabian-set story, hyper-kinetic “Sherlock Holmes” director Guy Ritchie goes a different route, inviting Will Smith to bring the cocky hip-hop swagger of his early career to the role, while CG-swelling the actor’s muscles to match. Call it “Aladdin and the Fresh Prince of Ababwa” — which could well have been Ritchie’s pitch for a still largely stereotype-driven project that seems to work best when it’s not directly emulating the cartoon that came before.

It took Walt Disney Studios the better part of a century to build a library filled with what the world thinks of as animated classics, and less than a decade to pillage that catalog in service of all these entertaining but clearly unnecessary live-action remakes — movies that, from the looks of things, will not stand the test of time, but have proven awfully profitable in the short term. The fact that in 20 years, fewer people will be watching his “Aladdin” than the 1992 cartoon seems to motivate Ritchie (who shares screenplay credit with John August) to make the film reflect the moment.

That’s evident from the opening scene, as Smith sings a fresh version of “Arabian Nights” in which the word “chaotic” updates the original song’s culturally insensitive “It’s barbaric, but hey, it’s home” lyrics. (This framing device also pays off an idea intended for, but never implemented by, the 1992 cartoon, in which it makes sense why the Genie is singing this particular number in human form.)

More importantly, the 1992 movie’s wide-eyed but underwritten Princess Jasmine now has ambitions of her own: As embodied by Naomi Scott, she’s no longer just a beauty to be won by “diamond in the rough” street urchin Aladdin (here played by Mena Massoud), but a restless and frustrated young woman who sees herself as a potential successor to her father the sultan (Navid Negahban). If Will Smith’s Genie seems bigger and potentially more powerful than Williams’ did, then the opposite goes for the power-hungry Jafar: Dutch actor Marwan Kenzari may be a handsome alternative to the animated version’s effete vizier, with his pencil moustache and Sophia Loren eyes, but he no longer looms large enough to feel like much of a threat.

In the 27 years since the cartoon was first released, Disney’s “Aladdin” has been reinvented once before as a live-action Broadway musical (a natural, considering the cartoon’s show-tunes-powered format). Ritchie’s approach benefits from that adaptation. Reteaming with composer Alan Menken, who’s assisted here by “La La Land” lyricists Benj Pasek and Justin Paul, the director borrows many of the ideas from the stage version and ports them back over into the iconic visual world of the animated film — adding an over-the-top Bollywood-style spin to the film’s biggest production numbers.

It’s great to see Smith in comedic mode again, and smart of the team to base the Genie’s personality on the star’s brand, rather than imitating what Williams did with the role. Even in cases where Smith is quoting directly from the original, his persona comes through loud and clear as this blue-hued, CG-enhanced master of ceremonies. If anything, it’s the stage Genie whose influence comes through, for it was on Broadway that the Genie was first played so flamboyantly (James Monroe Iglehart earned a Tony for that fresh interpretation). Smith builds on that approach, affecting the diva-like attitude of a demanding fashion designer.

The character isn’t gay per se; in fact, the Genie gets a romantic subplot of his own, involving Jasmine’s handmaiden, Dalia (Nasim Pedrad). Watching Smith’s performance, however, one could certainly make the case that the closet can be even more confining than a magic lamp — although kids will see the character’s prancing as a kind of silly clowning, which it certainly is.

Frankly, “Aladdin” could have used one of those “queer eye” makeovers, as the production design, costumes and choreography all look garish compared with the relatively classy and consistently elegant aesthetic that an openly gay musical director such as Bill Condon brought to his “Beauty and the Beast” adaptation. But when it comes to reinventing Disney cartoons, it’s still kitsch as kitsch can. Here, the outfits are lovely — especially Jasmine’s teal-toned wardrobe, though it’s a shame to cover up Aladdin’s trademark bare chest (and the character’s hairpiece doesn’t do the dimple-cheeked Massoud any favors). Hollywood has been using Arabian stories as an excuse to show skin since Rudolph Valentino made “The Sheik” and Douglas Fairbanks Jr. played “Sinbad the Sailor.” One can imagine Ritchie’s version pretty much earning the fundamentalist seal of approval.

Where the director really shines is in melding practical elements with virtual ones. Whether making Smith’s computer-enhanced and cerulean-skinned Genie look natural sharing the screen with Aladdin or swooping the camera along magic carpet rides through virtual sets, Ritchie’s style embraces the kind of expressionism needed to pull off such a fanciful tale. The sequence featuring “A Whole New World” actually feels more timeless here by virtue of its extreme stylization, whereas Smith’s “Prince Ali” number has the more dated feel of an elaborately staged 1950s showstopper.

Audiences know these Disney classics so well that any live-action adaptation succeeds or fails by how closely the filmmakers choose to adhere to the original. From the start, “Aladdin” demanded at least one major change: As a story inspired by “One Thousand and One Nights,” the cartoon was an Arabic folktale as reinvented by white guys, which means that any contemporary version would need to cast people of color in the roles. Smith will get the majority of the attention, bringing so much of his own brand to the Genie (he even calls out his own name in the end-credits song). Yet Scott commands her share of respect as Jasmine, reinventing the character via the movie’s contemporary-sounding “Speechless” — the closest thing to a female empowerment anthem Disney has given us since Queen Elsa let it go in “Frozen.”