Why Jack Reynor Gets Fully Naked in Ari Aster’s ‘Midsommar’ 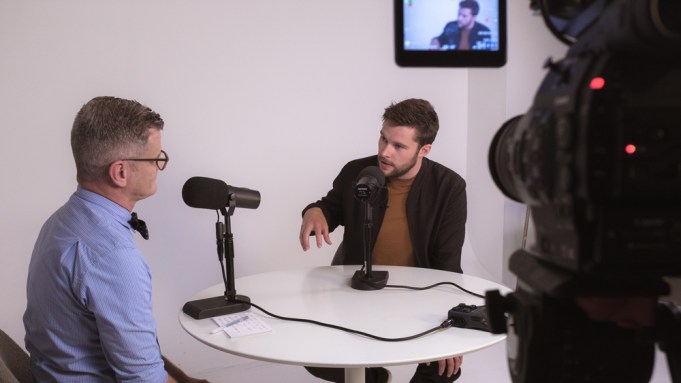 “It’s a horror movie, among other things” says Jack Reynor, who stars in “Hereditary” director Ari Aster’s sophomore feature. “Midsommar” follows a group of friends who travel from New York City to the Swedish countryside for a once-in-every-90-years celebration that involves drugs, sex and ritual killings.

Reynor plays Christian, a PhD student who is on the verge of breaking up with his girlfriend (played by Florence Pugh). After she experiences a horrifying loss, he reluctantly invites her on the excursion to Sweden. “It’s a breakup movie. It’s a folk horror movie,” Reynor says. “There’s a lot going on it.”

The 27-year-old actor sat down in New York City for this week’s episode of “The Big Ticket,” Variety and iHeart’s movie podcast. [WARNING: This conversation includes a few spoilers because “Midsommar” is not the kind of film you can discuss without revealing key details.]

“Midsommar” is very bright — literally,” Reynor describes of the folk horror film. “Sun-filled fields of grass are punctuated by villagers dressed in all-white flowing hippie attire with flower details. All the terror in the film happens in broad daylight. That’s a testament to the skill of the filmmaker to be able to find that depth of darkness in blistering sunlight.”

He hadn’t seen “Hereditary” when he signed on for the movie, but after reading Aster’s “Midsommar” script, Reynor said, “This is something that isn’t really getting made.”

He continued, “This is an opportunity to do something that’s unique. None of the camera direction or any of that was written into the script so when [Ari] spoke to me about it in person, I understood what his vision was for, how he was going to execute it visually, there was no way that I could’ve said no to doing it.”

And then there’s Reynor’s full frontal sex scene. “I was advocating for as much full frontal as possible,” he said. “I felt like it was really important. When I read the script, I saw an opportunity to take a character who exhibits a lot of archetypal male characteristics — like male toxicity — who has all of the stuff stripped away from him through the course of the film and then ultimately finds himself in this situation which is kind of the ultimate humiliation…It was always intentional to have the full frontal. That was what Ari wanted to do. But I was really saying, ‘We got to do as much of this as possible.’”

Said scene isn’t a sexy bedroom romp. Instead it’s a twisted mating ritual between Reynor and one of the villagers that includes a chorus of naked women of all shapes, sizes and ages cheering them on, including an elder who helps Reynor along by grabbing and pushing on his bare buttocks. Reynor’s bewildered looks when he realizes what is happening while continuing to partake makes the scenario even weirder.

“It’s interesting to see it with an audience because particularly when that kind of facial expression emerges, half of the audience will burst into laughter. Like a nervous laughter, but laughter nonetheless,” Reynor said. “And half of them turn around and they’re looking at people like, ‘What the f— are these people laughing about?’”

Next up for Reynor, who was born in the U.S. but raised in Ireland, is the premiere of his writing and directorial debut, “Bainne” a ghost story short that takes places in the 19th century during Ireland’s Great Famine.

“I’m really proud of it,” Reynor said. “It was my first opportunity to really get behind the camera and to design my own shot list, to think about the composition of a frame and everything that I could use within it to say something.”

Reynor definitely has things to say about filmmaking. So much so that he started an Instagram page, @jrcinemania, in April dedicated to the art. “As a bit of an experiment I’m going to be putting up posts here once or twice a week and writing a little about films as I see them and also about some of my personal favourites,” he wrote in his first post. “The idea is to get a conversation going with fans of cinema and hopefully in the not too distant future I’ll begin to do some podcasts featuring interviews with people in the industry. All questions and comments relative to cinema are welcome!”

Listen to the full interview “Big Ticket” interview with Reynor below. “The Big Ticket” can be found at iHeartRadio or wherever you listen to your favorite podcasts.