Kumail Nanjiani on Getting in Shape, Those ‘Eternals’ Rumors and ‘Stuber’s’ Nude Scene 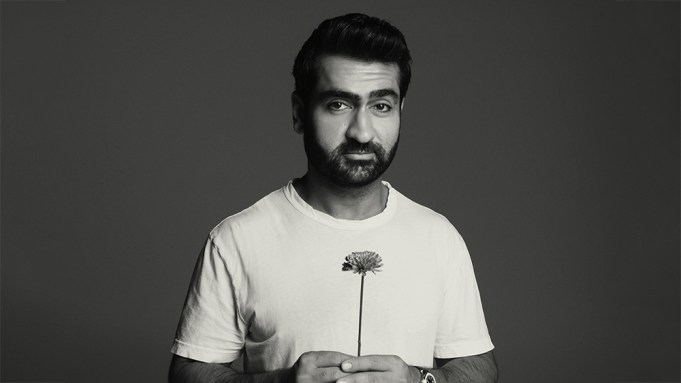 Kumail Nanjiani is bulking up.

The funnyman has been getting into the shape with the help of a trainer — so much so that a story appears in the latest issue of Men’s Health magazine about Nanjiani and his gym routine.

“When I was a kid, I assumed at some point in my life I would be in perfect [shape], I would be the perfect male form, right?” he said on this week’s episode of “The Big Ticket,” Variety and iHeart’s movie podcast. “I just assumed it would happen. I would have crazy abs.”

He continued, “It just never happened, and I’m 41 now. I was like, ‘If it doesn’t happen this year, it’s just never going to happen.’ At the end of last year I was like, ‘Oh next year, I’m gonna be in the best shape of my life.’ It’s been really, really intense.”

But could he also be getting into shape to place a superhero in the Marvel Cinematic Universe? Nanjiani is rumored to be starring in the upcoming Marvel film “The Eternals” opposite Angelina Jolie and Richard Madden.

“I cannot comment on that,” he said, adding, “It would be so great to be part of a superhero film. I would love it so much.”

What he can certainly talk about is his new buddy comedy “Stuber” with “Guardians of the Galaxy” actor Dave Bautista. In the film, Nanjiani plays an Uber driver who picks up a cop (Bautista) on the hunt for a murderous gang leader.

Nanjiani admits he was worried how Fox’s R-rated comedy would be supported after Disney acquired the Murdoch’s film empire.

“Honestly, we were nervous about the merger, but it’s been great,” he said. “They’ve been very, very supportive. You know, we’ve had the marketing meetings and they really love the movie and they’re really pushing it.”

That makes “Stuber” one of the rare Disney movies to include full-frontal nudity. At one point, Nanjiani is FaceTiming with his love interest (“Glow’s” Betty Gilpin) in a male strip club when she notices a very well-endowed man walking behind him. Nanjiani still hasn’t gotten over being surrounded by so many “shirtless oiled-up beefcakes.”

“I never felt worse about myself,” he cracked.

Next up for Nanjiani is “Little America,” an anthology series about immigrants in the U.S. for Apple with his wife Emily V. Gordon (they earned an Oscar nomination for their screenplay for “The Big Sick.). Immigration may be at the center of today’s political discourse, but Nanjiani isn’t ready to make an endorsement in the 2020 race for the White House.

Listen to the full episode of “The Big Ticket” below, and check it out at iHeartRadio or wherever you find your favorite podcasts.