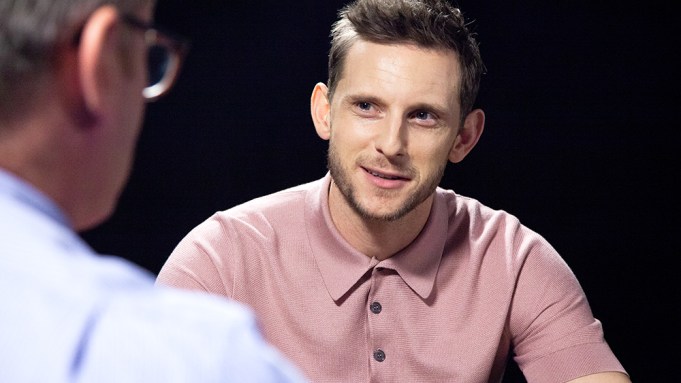 Jamie Bell admits he was hesitant to sign on to star in “Skin,” his new indie drama about Bryon Widner, a real-life neo-Nazi who left the white supremacy movement and became an FBI informant.

“I was very scared, honestly,” says Bell, who stars as Widner. “There was a lot of fear and trepidation about doing this movie. I was worried. I think that these are a group of people that are not to be messed with, really. They are organized, they’re armed. They’ve shown and they continue to show that they are people who don’t mind being out in the daylight. They don’t care that their faces are out there carrying torches, saying things they they’re saying, carrying the slogans that they’re carrying. So, just from a literal sense of safety, I was afraid.”

I sat down with Bell for this week’s episode of “The Big Ticket” podcast the morning after the Los Angeles premiere of “Skin.” Based on writer-director Guy Nattiv’s Oscar-winning short of the same name, “Skin” follows Widner as he begins to rethink his allegiance to the white power movement after he falls in love and becomes a stepfather to three girls. When he finally makes the break, he undergoes a torturous two-year process of removing his horrifying facial tattoos.

Bell did spend time getting to know Widner. They first talked on Skype on the same day as the 2017 Charlottesville rally that ended with a deadly car attack. “I got off the phone and I said to Guy, “I don’t think we should be making this movie, man. I think that it’s too incendiary right now. It’s too explosive,'” Bell remembered. “We’re in a world where it’s being emboldened. They’re walking in the streets. They’re in broad daylight. They’re showing their faces.'”

Bell put on 20 pounds, shaved his head, wore fake teeth and contact lenses and spent three hours a day having the fake tattoos applied to his face and body. When Nattiv was first shopping the feature, he was told the story would be too hard for audiences to believe, especially because at the time it looked like Hillary Clinton was going to win the presidential election. “They were like, ‘That doesn’t exist in America anymore. That’s an old-world kind of thing. We dealt with that,'” Bell said.

But Donald Trump, rather than Clinton, became president. British-born Bell, who resides in New York City, doesn’t mince words when talking about the current White House, saying that Trump “leaves me hopeless a little bit” and that he worries about his kids’ future. (He has a five-year-old son with Evan Rachel Wood is five. He and his wife Kate Mara welcomed a daughter in May.) “I really don’t want another four years of this,” Bell said. “It’s just too depressing.”

Bell also co-starred earlier this year in “Rocketman” as Elton John’s longtime writing partner Bernie Taupin. He took voice lessons because he had to do his own singing in the movie — not something he was necessarily looking forward to doing. “My mom would take me on all these f—king auditions when I was a kid,” Bell recalled. “If it was dance, I’d be there all day. All day. But if it was singing, I’d come out after 30 minutes and she’d be like, ‘What happened?’ I’d be like, ‘They asked me to sing.’ She’d be like, ‘Let’s get back on the train.’ I always had this association with singing. It’s just a disaster.”

Despite his aversion to singing, Bell did belt out his Cher impression during our interview. “Do you think it’s good?” he asked. “Kate doesn’t think it’s good.”

That’s not all Bell and I talked about. You can listen to the full interview below to find out what he said about crying during “A Star Is Born.” Plus, he also revealed the movie he’s watched about 100 times and explains why he has no regrets about making “Fantastic Four.”

You can listen to “The Big Ticket” at iHeartRadio or wherever you find your favorite podcasts.

“Skin” is on demand now and in theaters Friday, July 26.