Why Emma Stone Was Haunted by Fear of Vomiting While Shooting ‘Zombieland: Double Tap’ 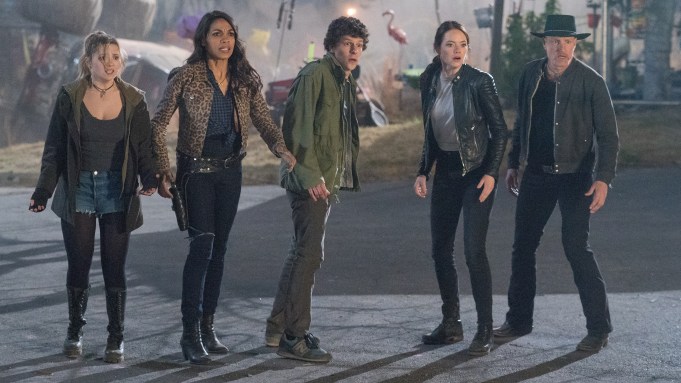 The zombie slayers are back!

“You take stock of your life a little bit,” Stone says of reuniting with her co-stars. “Think about all the things that have happened since we were here 10 years ago.”

I sat down the four leads and series newcomers Zoey Deutch and Rosario Dawson for this week’s episode of “The Big Ticket,” Variety and iHeart’s movie podcast.

Deutch revealed that Harrelson put her through the ringer while filming a scene that showed her character throwing up.

“The stuff that the vomit consists of is oatmeal, yogurt and then a little bit of granola for the chunkier buts, but Woody decided it didn’t look like vomit enough, so they decided to put in orange juice and he still didn’t think it looked vomity enough, so he asked to put in coffee,” she recalled. “I was actually going to throw up because I had coffee, orange juice, yogurt, granola and oatmeal in my mouth.”

Dawson cracked that Harrelson was probably hazing her. “I can’t believe you let him do that to you. That is so mean,” she said, laughing.

However, Harreslon confirmed he insisted on making things as realistic as possible. “We had to increase the flow and the chunkage,” he said.

Turning to Harrelson, Eisenberg said, “You were obsessed that it needed to have more pieces in it.”

Stone wasn’t enjoying the turn of conversation. “I really don’t like vomit,” she said. “I don’t like the description of it. I’m a little emetophobic.” (Editor’s note: Emetophobia is the fear of vomiting.)

Meanwhile, all those involved agreed if a third “Zombieland” was going to happen, they don’t want to let so much time pass between movies again. “I personally can go sooner,” Stone said. “I’m into it.”

For more of my chat with the cast of “Zombieland: Double Tap,” check out the videos below. You can also find “The Big Ticket” at iHeartRadio or wherever you listen to your favorite podcasts.