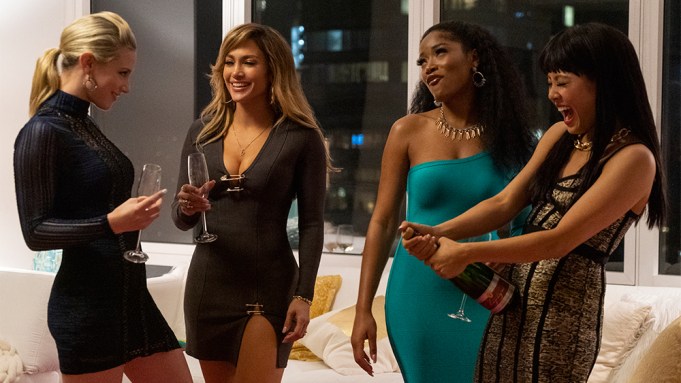 There’s a good reason why the upcoming movie “Hustlers” may remind audiences of a Martin Scorsese film.

The stripper crime drama, based on a true story and written and directed by Lorene Scafaria, stars Jennifer Lopez as Ramona, a New York City stripper who takes a newbie (Constance Wu) under her wing. But when business slows down during the financial crisis of the late 2000s, Ramona masterminds a scheme to scam Wall Street suits out of their money.

“When I first read it, I was like, ‘This is a lot like ‘Goodfellas,’ because those guys are doing things that are objectively bad, but for some reason you like them,” Wu, whose character Destiny turns to stripping to help support her grandmother, said during an appearance on this week’s episode of the Big Ticket, Variety and iHeart’s movie podcast.

She adds, “But I will say, there’s one big difference. One of the first lines of ‘Goodfellas’ is, ‘All my life, I wanted to be a gangster.’ And then the last line of ‘Goodfellas’ is essentially, ‘I’m not a gangster anymore and life is boring.’ In that sense, [‘Goodfellas’] glamorizes the gang life. And while I think ‘Hustlers’ has moments of glamour, what Lorene did was a little more complex than that.”

Stripping on stage didn’t come easy to Wu. She trained on a temporary pole installed in her living room. “I was also walking around my house in [nine-inch heels] just to be like, ‘Let me see if I could get used to this,’” she said. She now says seven inches are her heel limit.

Watching Lopez film her big strip scene was awe-inspiring. “I just didn’t want it to stop because she just owns the stage,” Wu recalled.

She certainly does. “Lorene always said, ‘These women are like athletes,’” Wu said. “And if you think of it in a certain way, they’re both using their bodies to make money, athletes and strippers — for entertainment and to make money. Both of those professions. It’s just we decide to judge and shame one of them more than the other.”

While “Hustlers” looks like it’s going to be a hit when it debuts in theaters Sept. 13, Wu also discussed her other big success, the ABC comedy “Fresh Off the Boat.” She received major backlash in May when she tweeted that she was “so upset” after the network announced the sitcom had been renewed. She later explained via Twitter that she has no problem with “Fresh Off the Boat,” clarifying that her frustrations were because another season of the show meant that she had to turn down “another project that I was really passionate about.”

The project she turned down as a play, Wu shared. “I grew up in theater, so that’s home for me. You know what I mean?,” she said. “And a lot of people had told me, ‘Oh, yeah, it’s not going to get picked up.’”

In fact, she said she and her co-star Randall Park had been discussing how they thought the show was over. “He’s just not as reactive,” Wu said said during an appearance on “The Big Ticket.” The actor added he was also “prepared for it to not get picked up, and I was excited by these others things I could do.”

Wu continued, “This play I wanted to do, my heart was so in it. And so for just a moment of heat, which we all have, I got upset that I couldn’t do the play. But if you look at any of my tweets for the past six years about ‘Fresh Off the Boat,’ I love it and I love those kids and I love the crew. And it’s just a really peaceful, happy job that I’m really lucky to have.”

Listen to more of Wu’s conversation on “The Big Ticket” below and at iHeartRadio or wherever you find your favorite podcasts.