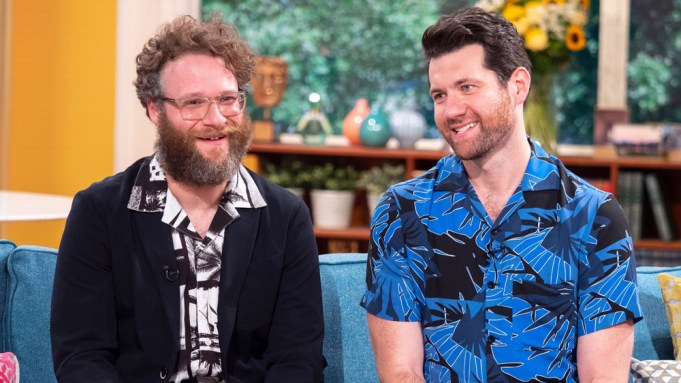 Billy Eichner and Seth Rogen may co-star in the new “The Lion King” with Beyoncé, but they didn’t meet Queen Bey until the world premiere of the movie earlier this month in Hollywood.

“She was really lovely,” Eichner told me when he and Rogen sat down for this week’s episode of “The Big Ticket,” Variety and iHeart’s movie podcast. “We happened to be backstage together. Seth and I were the first ones backstage waiting to go and then Beyoncé was the next person. Seth and I were just in the corner not knowing what to do or say. She came right up to us, introduced herself and gave us all hugs.”

Eichner has not asked Bey to be on “Billy on the Street.” “I’m not bothering Beyoncé with that!” he said. “She has enough to do. Maybe Jay-Z…He’s from New York.”

Rogen had never witnessed an audience reaction like the one Beyoncé received when director Jon Favreau introduced her to the stage at the premiere. “She is the only person I’ve seen get a standing ovation before they do anything, for just existing,” he said. “And it just made sense. No part of me was like, ‘She doesn’t deserve a standing ovation for just existing.’ I was just like, ‘Yes! Everyone stand up!’”

While reviews of the film have been mixed, most critics have heaped praise on Eichner and Rogen for their work as Timon and Pumbaa. “The first day we recorded, we were in this black box theater with JD McCrary, who plays young Simba,” Rogen said. “We were trying to get our lines right and Jon was like, ‘Put down the scripts and just act out the scene as though you know the point of the scene. You find this little lion, you are scared, you debate talking and you try to help him.”

“We were running around each other,” Eichner added. “We were kind of embodying the characters on our feet.”

Rogen said, “It was pretty amazing and they used a lot of stuff.”

You can listen to the full episode of “The Big Ticket” with Eichner and Rogen below. Plus, Keegan-Michael Key also talks about meeting Beyoncé and Chiwetel Ejiofor and why he was a little worried about the royal premiere of the movie in London with Prince Harry and Meghan Markle. And make sure to check out the “Big Ticket’s” second “Lion King” episode with director Jon Favreau.

“The Big Ticket” can be found at iHeartRadio or wherever you listen to your favorite podcasts.