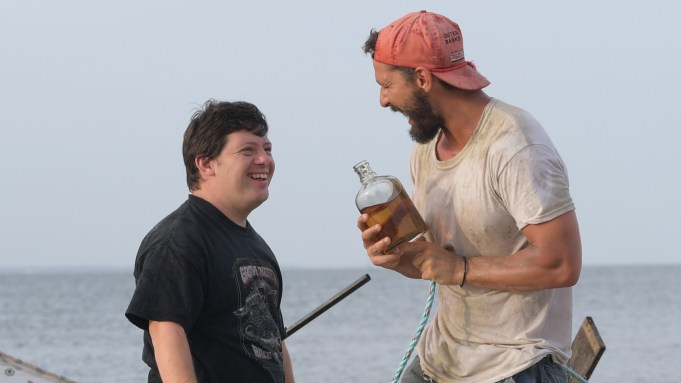 Zack Gottsagen has wanted to be an actor since he was a kid.

Now, the 35-year-old actor with Down syndrome is in the spotlight with Roadside Attractions’ “The Peanut Butter Falcon.” The road trip movie stars Shia LaBeouf an as outlaw on the run who befriends a man with Down syndrome (Gottsagen) after he’s run away from his assisted living home to pursue his dreams of being a professional wrestler.

Co-directors Tyler Nilson and Michael Schwartz wrote the movie for Gottsagen after meeting him at a summer camp for people with disabilities.

Just hours before the Academy’s Governors Awards, Gottsagen is sipping a cup of coffee in the lobby of the Loews Hollywood Hotel before getting ready to hit the red carpet with Dakota Johnson, who plays a social worker in the movie.

“He deserves all the success in the world,” Johnson said of Gottsagen.

Gottsagen grew up in Florida. His parents — moms Shelly and Trish — encouraged his artistic endeavors early on. As a kid, he took acting and dancing lessons.

One of his favorite TV shows was “Even Stevens,” the Disney Channel show that launched LaBeouf’s career. “That show always made me laugh so much,” he said.

Asked if he was nervous meeting LaBeouf, Gottsagen quickly replied, “Nope! I was just so happy just to meet him.”

LaBeouf credits Gottsagen with helping him stay sober. He says he was inspired to truly turn his life around when Gottsagen said he was disappointed with him after he had a run-in with police while they were shooting the movie.

Since its release in March, the $6.2 million-budgeted “Peanut Butter Falcon” has gone on to earn $20 million. And it’s not just a sleeper favorite at the box office — Gottsagen’s name has popped up as a possible awards contender, especially for a Spirit Award.

And Gottsagen isn’t resting on his laurels anytime soon. His dream project is playing Danny Zuko in “Grease.”

Could Johnson be his Sandy? “I immediately just started sweating,” she said of the idea. “The idea of singing is so scary to me.”

“She’s so nice and she’s a beautiful person,” Gottsagen said. “And she would take me for mani-pedis.”