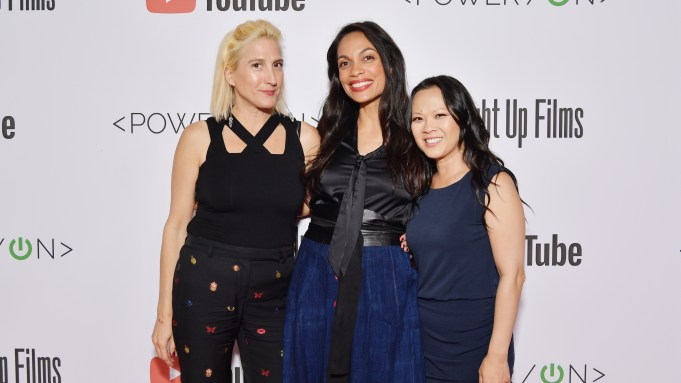 Straight Up Films created the anthology “Power/On” of five shorts focused on encouraging girls in STEAM (science, technology, engineering and math with the arts thrown in) directed by actresses Rosario Dawson, Julie Bowen, Ana Brenda Contreras, Lisa Edelstein, and Nikki Reed. With support from YouTube, the shorts premiered Wednesday at the Google campus in Playa Vista and will be available for streaming on YouTube on April 26.

Each film centers on women and girls working on and interacting with a different technological advancement.

Rosario Dawson told Variety at the anthology’s world premiere, “The point of this series is to show all the different ways people can show up for their family, their friends, their community by pushing themselves when they see a problem. Maybe a solution doesn’t exist, but that doesn’t mean it can’t be created.” She hopes that her work behind the camera will allow girls to see her as a role model, including her own daughter.

“Modern Family” actress Julie Bowen talked to Variety about her experience at an all-girls school. “The messaging at the time was, ‘you’re going to an all-girls school because when girls raise their hands in math and science class they call on the boys.’ We needs to just get rid of that message.” Bowen spent time shadowing directors on set of “American Horror Story” as a participant of Ryan Murphy’s Half Initiative, a program designed to increase women and minority directors. She said the initiative gave her “positive encouragement” and helped her take on directing her short “Girl Code.”

Jenna Ortega, who appears in Bowen’s short film, said, “I want people to get inspired by seeing themselves, of all different colors and backgrounds, on screen.” Ortega, 16, is outspoken on social issues and said her interest in politics began at 6 years old. She will star in the upcoming second season of “You.”

“The point of this whole event is to inspire young girls to follow their dreams and encourage them to use their imagination and let them know that that is their superpower,” said actress Lisa Edelstein, who directed the short “Lulu.” “We need more women stepping up and giving a hand to other women. Not to push men out the door, but there are a lot of stories to tell and they don’t all come from a male perspective.”

Ana Brenda Contreras directed the shot film “Wingbeat.” “Directing is something I wanted to do for a long time. It sends the message that you can do whatever you want to do in life,” she said. “Careers don’t have a gender.”

“We need to shatter the misconception in young girls that they are not as inherently good at math or engineering. These are learned skills,” said “Andy’s Song” director Reed. Reed recently started an environmentally conscious fashion company.

Straight Up Films, a female founded and run production company, produced the series in association with Cinema Giants. Straight Up Films co-CEO Marisa Polvino said, “When we came up with the idea for the series, it was important to us to champion women who had never had the opportunity to direct before and we also wanted to reach the widest possible audience of young girls who are our emerging leaders. YouTube was the perfect fit for our stories and we are grateful, not only for their support, but for their leadership’s shared vision.”