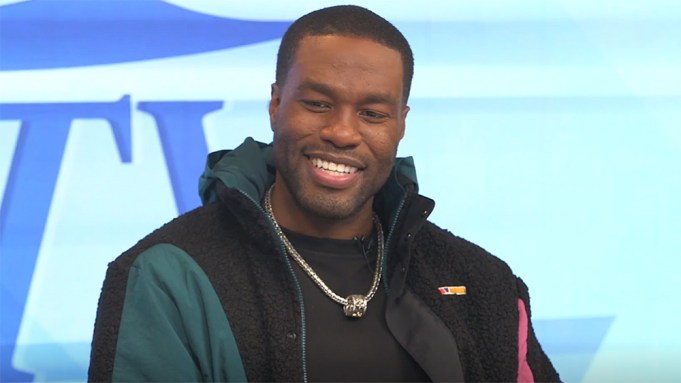 Those who are caught up on “Watchmen” know Yahya Abdul-Mateen II knows how to strike the balance between understated and omnipotent. He’s also no stranger to playing superheroes, as Aquaman’s nemesis Black Manta in the DC Universe.

“I have Black Manta going on, but if they want to have more conversations, I’ll definitely come to the table and see what we could do,” Abdul-Mateen said.

Variety exclusively reported that Michael B. Jordan had pitched Warner Bros. on his vision for the Man of Steel, but could not commit to a movie, which would likely not hit theaters before 2023. Henry Cavill most recently donned the cape, playing the hero in “Man of Steel,” “Batman v Superman: Dawn of Justice” and “Justice League.”

Abdul-Mateen added that he’s open to playing some non-superhero roles: “I do need to fill up my slate with some regular dudes without powers, who can figure out their problems without access of superhero powers.”

As Variety exclusively reported in October, Abdul-Mateen is taking on a lead role in the upcoming fourth installment of “The Matrix” series. Keanu Reeves and Carrie-Anne Moss are set to return to the hit sci-fi franchise, with Lana Wachowski (one half of the Wachowski sibling duo who created it) set to write and direct. The new “Matrix” will open on May 21, 2021.

“I was always a fan of the technology of ‘The Matrix,'” Abdul-Mateen said of the original film, released in 1999. “I’m already a fan of what we are about to do — just from the perspective of wanting to see how crazy we can get with the technology. [My] excitement is rising and rising every day.”

The first three “Matrix” films — “The Matrix,” “The Matrix Reloaded” and “The Matrix Revolutions” — have collectively earned more than $1.6 billion at the global box office.

Abdul-Mateen’s star is certainly on the rise. In addition to starring in HBO’s “Watchmen” he is also set to topline Jordan Peele’s remake of “Candyman,” which he told Variety he has already wrapped.