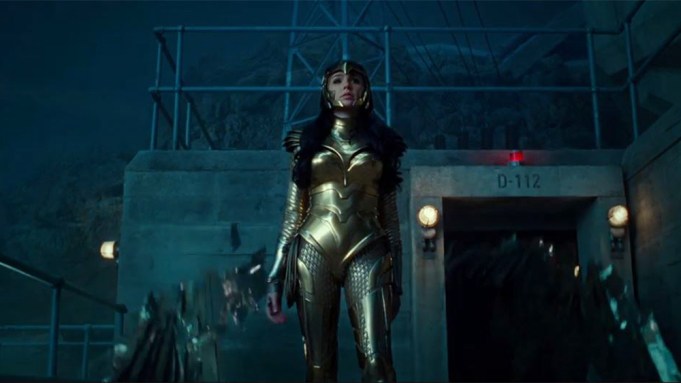 The film is set, of course, in the 1980s in America, decades after the first film’s events. Kristen Wiig is playing Wonder Woman’s infamous comic-book nemesis Cheetah, while Chris Pine is returning for the sequel. It’s unclear, however, in what capacity, seeing how his Steve Trevor died in 2017’s “Wonder Woman.”

In the trailer, Diana talks with Barbara Minerva (Wiig) over drinks about her past life.

“My life hasn’t been what you probably think it has,” she says. “We all have our struggles.”

“Have you ever been in love?” Barbara asks.

“So many times, yeah. All the time,” Barbara says.

“Welcome to the future,” he says in a voiceover. “Life is good, but it can be better. Why shouldn’t it be? All you need is to want it. Think about finally having everything you’ve always wanted.”

Gadot battles baddies in a mall characteristic of the ’80s, and shows off some modern art to Steve Trevor, but it appears audiences will also return to Themyscira in “WW84,” as young woman warriors are shown training and competing in an arena on the mythical island.

The “Wonder Woman 1984” trailer was released during the 2019 Comic Con Experience (CCXP) in Brazil. Gadot and director Patty Jenkins introduced the trailer for fans inside the venue, which was live-streamed on Twitter.

Jenkins said that because the movies takes place in the ’80s, they wanted to make a big, ’80s-style action movie. “Real wire-work, real locations, and now with modern technology, so what you see today is real people doing real stunts on those locations.”

She added that Wiig’s appearance for Cheetah is mostly practical, with a little CGI to help it go all the way.

“I can’t tell you, but here’s what I will say. We didn’t put Steve Trevor in this movie just to have Steve Trevor in the movie,” she said. When they were writing the film, “a Eureka moment came and it couldn’t have been told without Chris Pine playing Steve Trevor.”

Jenkins’ “Wonder Woman” was a huge hit in 2017, taking in $821 million worldwide, with $412 million of that coming from North America. Its massive haul made history, becoming the highest-grossing live-action film to be directed by a woman. “Wonder Woman 1984” will be the ninth installment in the cinematic DC Extended Universe (debuting a few months after “Birds of Prey”) and the fourth film to feature Gadot’s Wonder Woman. Gadot and Jenkins produce the film along with Charles Roven, Deborah Snyder, Zack Snyder and Stephen Jones.