Willem Dafoe on His New Films ‘The Lighthouse’ and ‘Tommaso,’ Robert Pattinson as Batman 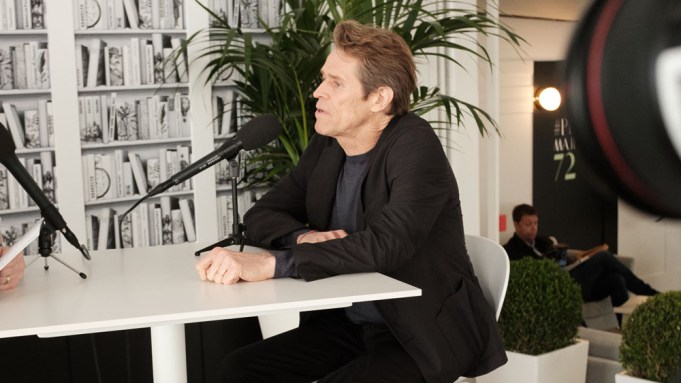 Willem Dafoe has spent the last two awards seasons on the campaign trail. The actor earned back-to-back Oscar nominations for his work in 2017’s “The Florida Project” and for last year’s “At Eternity’s Gate.”

And if the critical reaction to “The Lighthouse” is any indication, he’ll be back on it soon.

“The Lighthouse” is director Robert Eggers’ black-and-white follow-up to his 2015 debut “The Witch.” Dafoe and Robert Pattinson star as 1890s lighthouse keepers who slowly spiral into insanity as they tend to a lighthouse on a slab of rock in the middle of a brutal New England storm.

Oscar buzz began almost immediately after the movie premiered at the Cannes Film Festival to ecstatic reviews for both Dafoe and Pattinson. Eggers is being hailed as the next big talent to look out for. “That’s good. I’ll take that,” Dafoe says when asked shortly after the premiere about the accolades. “I’m happy to hear that talk because that kind of recognition really helps the movie.”

I sat down with Dafoe at the Majestic Cannes hotel’s beachside restaurant for this week’s episode of “The Big Ticket,” Variety and iHeart’s film podcast.

Shot on location in Nova Scotia, the real-life weather captured on film is the third star of “The Lighthouse.”

“It’s cold, it’s miserable, [but] that’s kind of the point,” Dafoe said. “We’re there on a mission. That helps sometimes with really extreme situations. The weather tells you what you need to do and you can’t act that red nose, that red runny nose and that shivering and that bone-cold tiredness.”

Dafoe says he and Pattinson approached the project completely differently. Dafoe likes rehearsals whereas Pattinson didn’t want to reveal too much about his preparation beforehand because his “Lighthouse” character not only has a mysterious past, but is a man of few words. “We’re different, and the truth is, because our methods were different, they sort of mirrored the differences in the characters,” Dafoe said. “If it was a problem, I’m sure Rob Eggers would have corrected it. But in fact, he liked the tension and difference.”

Dafoe is quick to point out that he thinks Pattinson is a “great guy.” There was no “personal animosity, [but] we didn’t have much contact as far as hanging out or anything like that,” he explained. “It wasn’t a method thing. We worked hard, and it was miserable weather so when you’re free, you head for cover.”

Just three days before “The Lighthouse” team landed at Cannes, Variety exclusively reported that Pattinson was in final negotiations to star as the next Batman in director Matt Reeves’ upcoming “The Batman.”

“He’s got a strong chin,” Dafoe said of the former “Twilight” teen heartthrob taking on the Caped Crusader. “That’s a part of it. Can you imagine anyone with a weak chin ever playing Batman? I don’t think so.”

Dafoe was also at Cannes for “Tommaso,” his fifth collaboration with director and writer Abel Ferrara. Dafoe plays a fictionalized version of Ferrara, who moved to Rome before getting sober several years ago. His wife Christina and their young daughter Anna also co-star as versions of themselves in the film.

“It’s really an improvised movie,” Dafoe explained. “It’s basically there were situations and scenarios that were either close to something that happened with Abel, or something he was thinking about, and we’d play those out. They were seldom written.”

Dafoe says Ferrara’s sobriety has allowed them to “collaborate in a much a deeper way” than they had before. “He’s always been a deeply sweet guy, but when someone has an addiction, there’s a devotion that distracts them,” Dafoe said. “That’s all. It’s not even a moral thing. From my point of view, it’s a practical thing that he had another god, and it wasn’t the god of creativity.”

Listen to the podcast below to hear what Dafoe has to say about working with Jason Momoa in “Aquaman,” his upcoming film with Anne Hathaway and why he thinks “Body of Evidence,” his 1993 movie co-starring Madonna, was such critical and box office disappointment.

“The Big Ticket” can be found at iHeartRadio or wherever you find your favorite podcasts.