Why Liam Hemsworth Wasn’t at His ‘Isn’t It Romantic’ Premiere, but Wife Miley Cyrus Was 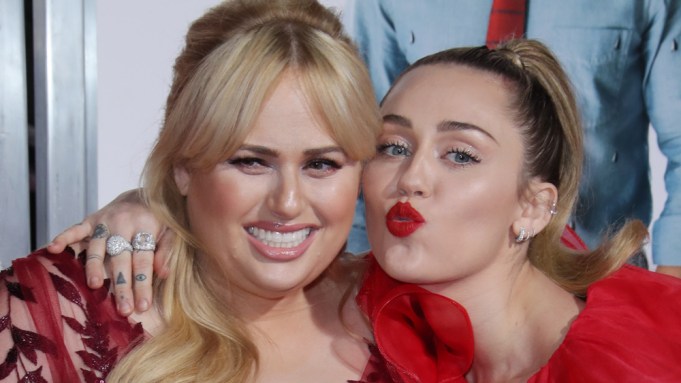 Liam Hemsworth had every intention of bringing his wife, Miley Cyrus, to Monday’s premiere of his new romantic comedy “Isn’t It Romantic.”

However, the Aussie actor was forced to skip the evening because of some “health things.” That didn’t stop Cyrus from attended the red carpet shindig at the Theater at the Ace Hotel in downtown Los Angeles.

“He’s down, he’s not feeling well right now,” Cyrus told Variety. “He just had some health things, and I think that’s what’s most important. Entertainers, we have a really hard time taking care of ourselves. This movie is the most important thing to him, so I had to be here to represent it. I’ve heard he’s just so funny in it. I’ve always known he’s the funniest person I ever met, but not everyone else knows that so I think this is going to be an amazing step for him.”

And then the “Wrecking Ball” singer cracked a joke about the real reason she attended the premiere. “I already had the dress,” she laughed. “Everyone thinks I’m here for Liam, but I’m really here for Maison Valentino.”

Later in the evening, Hemsworth posted a photo on Instagram of Cyrus on the carpet with his co-star Rebel Wilson. “Sorry I couldn’t make it to the @isntitromantic premier tonight guys,” he wrote. “Been dealing with some pretty annoying health stuff the last couple days. Lucky I have the best girl in the world to represent for me! Thanks for the support babe! I hope everyone enjoys the movie! It’s a perfect Valentine’s Day flick so if ya ain’t got nothin better to do then go see it! Love to all!”

A cheeky Cyrus posted a photo of herself in front of a movie poster that features Hemsworth playing a saxophone. “Getting sick blows. But so do I,” she wrote. “Get well soon babe. I love you. Play that sax you sexy f—.”

In other married couple news on the carpet, Hemsworth’s co-star Priyanka Chopra told Variety that she and her husband, Nick Jonas, are destined to collaborate on something. “I don’t know what we’re going to do but I’m pretty sure we will do something together,” she said. “It’s gotta happen.”

Priyanka Chopra's "pretty sure" she'll collaborate with Nick Jonas on something: "It's gotta happen" #IsntItRomantic pic.twitter.com/qD4XkdCNhD