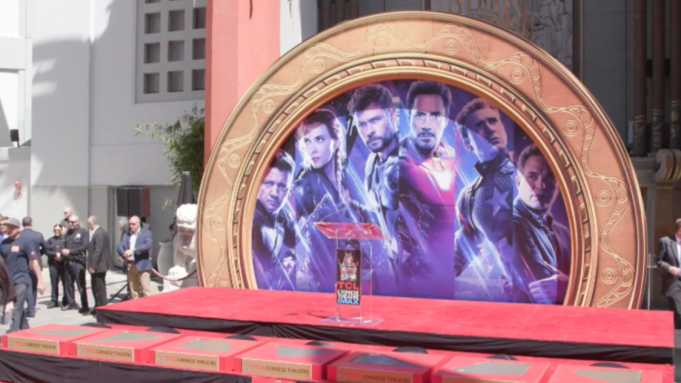 The Avengers have left an indelible mark on popular culture and now they are doing the same to the cement floor outside of the TCL Chinese Theater.

Watch the livestream video of “Avengers: Endgame” cast Robert Downey Jr., Chris Evans,  Mark Ruffalo, Chris Hemsworth, Scarlett Johansson, Jeremy Renner and Marvel Studios President Kevin Feige imprinting their hands and feet into the wet cement outside the theater. Their hands and feet will join those of some of Hollywood’s biggest stars across the decades.

One of the stars the group will be joining is Marvel legend Stan Lee on the iconic cement floor. Lee’s imprinting ceremony was in 2017. He died last year. The TCL Chinese Theater hosted a tribute to the late comic book creator in January of this year titled “Excelsior! A Stan Lee Celebration.” Writer/actor/director and lifelong Marvel fan Kevin Smith hosted the event.

Other Marvel Cinematic Universe actors’ imprints can be found outside the theater like Anthony Hopkins, Michael Douglas, Samuel L. Jackson, and Mickey Rourke. Downey Jr. will be cementing himself for round two, as the “Iron Man” actor had his first imprinting ceremony in 2009.