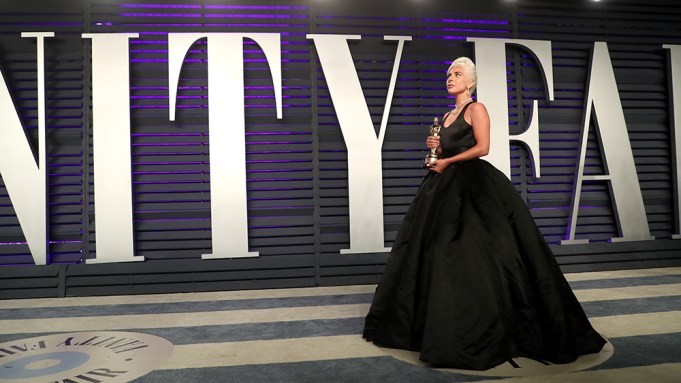 Glenn Close couldn’t leave the Vanity Fair Oscar party. Even though she’d lost in the best actress category on Sunday night, she still found herself winning the title of the queen of Hollywood. Throughout the celebrity-packed soiree, guests kept coming up and telling her how much they adored her. At around midnight, when Close decided it was time to get some sleep, the long line of movie and media stars paying their respects wouldn’t stop.

First, Close nibbled on an In-N-Out burger with Gayle King. Next, there were some kind words from Jennifer Lopez and Alex Rodriguez, who were seated in a booth overlooking the dance floor. Close walked into the main room at Wallis Annenberg Center. Jeff Goldblum stopped her for a kiss. James Marsden wanted a hug. She was being pulled and patted and comforted by strangers.

She eyed her exit; there was just one man blocking her escape. His name was Steven Spielberg. The director of “E.T.” put his arms around her. He rubbed his temples, as if to express his disbelief that she still hadn’t won an Oscar — after seven nominations. She smiled and offered him a peck on the check. He wouldn’t let her go: at least not without a selfie.

Okay, okay. Close was finally on the verge of her escape, practically hovering in the doorway, when an another arm reached for her. This one belonged to Vin Diesel, pulling her in. The “Fast and the Furious” star spoke in animated gestures and an exaggerated voice that made her laugh. He assured her that she’d win an Academy Award yet. “Next time!” he promised.

The Vanity Fair Oscar party has long been billed as the most exclusive event in Hollywood. This year, its standing was brought into question by a story in The New York Times that asked if the gala had lost some of its luster. The answer, according to some of the attendees, is definitely not. “The New York Times said this party is over?” questioned the film producer Bronwyn Cosgrave, who hosts the fashion podcast “A Different Tweed,” as she sipped a cocktail against the backdrop of Beverly Hills City Hall. “I think it’s really rocking! This is the best it’s been in years. Melissa McCarthy is in a track suit.”

That was true. The star of “Can You Ever Forgive Me?” and her husband Ben Falcone had traded their black-tie ensembles for more relaxed wardrobes by Adidas. This year’s event, hosted by Vanity Fair editor-in-chief Radhika Jones, boasted a guest list of A-listers, with some of the biggest names in entertainment. You could spend all night spinning your head, not sure where to look — from Lady Gaga to Taylor Swift, Lupita Nyong’o, Awkwafina, Natalie Portman, Charlize Theron, Spike Lee, Barbra Streisand, Tiffany Haddish, Miley Cyrus, Caitlyn Jenner, Tarana Burke, Ronan Farrow, Monica Lewinsky, and Jeff Bezos.

Part of the fun of the VF Oscar party is the people watching. After an endless awards season, all the VIPs are finally ready to let their hair down. Or at least to wear more comfortable shoes. On an outdoor patio, Frances McDormand lifted up her regal ballgown to show a Fox executive the pink Birkenstocks on her feet. Orlando Bloom hugged two women who congratulated him for his engagement to Katy Perry. “We are doing Jay-Z’s [Oscar party] and then we are going home,” he told them. In a sweetly protective gesture, Aaron Taylor-Johnson kicked away an ice cube on the floor, so it wouldn’t touch his wife Sam Taylor-Johnson’s gown. She later settled on a sofa with Elton John, who was wearing a jacket encrusted with sparkling beads.

And it’s always fun to play the game of, “How do they know each other?” Chris Evans engaged in a lengthy discussion with Bill Maher about politics. Trevor Noah of “The Daily Show” spoke to Netflix’s newest heartthrob Noah Centineo. J.J. Abrams hung out with Sacha Baron Cohen. Greta Gerwig is friendly with Adam Driver. Paul Rudd conversed with Miles Teller. And Swift, along with her boyfriend Joe Alwyn, chatted with the newlywed couple of Nick Jonas and Priyanka Chopra.

Later in the night, Diesel was seen on a FaceTime call with a woman who looked like Kirsten Dunst. It had to be her, right? Adam Lambert and Billy Porter graciously took selfies with fans. Nick Kroll one-upped that when he recorded a personalized video message for someone who wanted to send it to a friend.

Since the Oscars had just ended, there was still plenty of talk about this year’s awards season. Alfonso Cuaron was there with his trophy for directing “Roma,” the Netflix movie that just missed out on best picture to “Green Book.” Many still wondered what happened to the early frontrunner “A Star Is Born,” particularly after watching the magnificent performance of “Shallow” at the Oscars. “They should have done that in phase one,” an Academy strategist said, referring to the early period when Oscar voters are still filling out their ballots.

Even in a room where everyone is accustomed to big sightings, there was something next-level about Lady Gaga’s appearance. She arrived just a few minutes after midnight with her trophy for best song, and a circle formed around her. Gaga beamed as she accepted congratulations from fellow singers Beck and Halsey. But she was just as happy to talk to her lesser-known fans, as she clutched her Oscar proudly for the rest of the night.