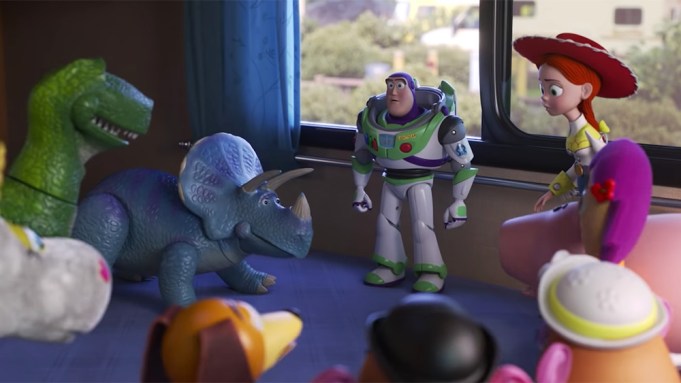 Disney’s domination over the box office only seemed to strengthen this weekend as “Toy Story 4” easily topped box office charts.

The fourth entry in Pixar’s animated series collected $118 million in ticket sales when it debuted in 4,575 North American theaters. While that haul is significantly below expectations – early estimates initially anticipated a start near $140 million – it’s hardly a disappointment for the critically acclaimed movie.

Despite glowing reviews, box office prognosticators suggest that “Toy Story 4” underperformed because audiences were wary about the need for another chapter after “Toy Story 3” wrapped up the series so perfectly. The domestic debut is only a slight jump on that entry, which bowed nearly a decade ago with $110 million. However, strong word of mouth will likely keep “Toy Story 4” in theaters long throughout the summer.

Overseas, “Toy Story 4” picked up $120 million from 37 international territories for a global start of $238 million.

Executives at the Magic Kingdom are optimistic about “Toy Story 4’s” triple-digit debut. “Looking at these four hugely popular ‘Toy Story’ films in 25 years, there’s remarkable consistency to what Pixar puts out,” said Cathleen Taff, Disney’s president of global distribution. “It’s a testament to the team’s commitment to excellence.”

“Toy Story 4’s” bow ranks as the fourth-biggest launch for an animated movie, behind “Incredibles 2” ($182 million), “Finding Dory” ($135 million) and “Shrek the Third” ($121 million). It’s also only the third movie this year to cross $100 million in receipts during its opening weekend. The other two – “Captain Marvel” and “Avengers: Endgame” – were both Disney releases as well.

Directed by Josh Cooley, “Toy Story 4” reunites Woody (voiced by Tom Hanks), Buzz Lightyear (Tim Allen) and Bo Peep (Annie Potts) with a band of plastic heroes. New to the gang is Forky, an anxiety-ridden spork voiced by Tony Hale, who helps teach them what it means to be a toy. The story was written by Rashida Jones, Will McCormack, Valerie LaPointe, Martin Hynes, and now-ousted Pixar chief John Lasseter.

In a very distant second place, United Artists’ “Child’s Play” earned $14 million when it opened in 3,007 venues. That represents a solid start for the modestly budgeted horror film, which is a remake of the 1988 thriller about an evil Chucky doll. Aubrey Plaza stars in “Child’s Play,” with Mark Hamill voicing the creepy toy. It cost $10 million to produce.

This weekend’s other new release didn’t fare as well. Lionsgate’s “Anna” launched with a dismal $3.5 million from 2,114 screens. Males accounted for 61% of ticket buyers, with 88% of that group over the age of 25. Sasha Luss, Luke Evans and Helen Mirren star. A number of sexual assault allegations were leveled against director Luc Besson during production of the film.

Falling not far behind “Child’s Play” on box office charts is another reboot, Disney’s “Aladdin.” The live-action musical pocketed $12 million in its fifth weekend of release, boosting its domestic total to $288 million. Globally, “Aladdin” crossed $800 million in ticket sales to date.

In fourth place, Sony’s “Men in Black: International” made $10 million during its second weekend in theaters, marking a steep 65% decline from its inaugural run. The fourth “MIB” film, starring Chris Hemsworth and Tessa Thompson, has generated $52 million so far.

Rounding out the top five is Universal and Illumination’s “The Secret Life of Pets 2,” which added $10.2 million to its North American tally. The animated sequel has grossed $117 million since debuting three weeks ago.

Among indie releases, Neon’s “Wild Rose” brought in $56,183 from four venues, averaging a solid $14,046 per theater. Directed by Tom Harper, the musical drama follows a country singer (Jessie Buckley) on the rise and premiered to critical acclaim at the 2018 Toronto Film Festival.

Overall, ticket sales continue to pace well behind last year’s strong summer season. As big-budget sequels like “Dark Phoenix,” “Men in Black: International” and “Godzilla: King of the Monsters” bring back disappointing receipts, the box office has dropped 6% below 2018’s record, according to Comscore.