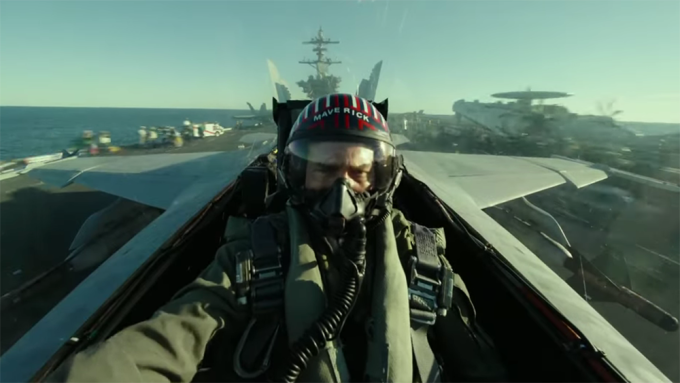 Tom Cruise made a surprise appearance at San Diego Comic-Con on Thursday to hype the forthcoming “Top Gun: Maverick” and receive mass adoration from Hall H.

“I felt it was my responsibility to deliver for you,” Cruise told the crowd, tugging local heartstrings by reminiscing on the original “Top Gun” shoot in Downtown San Diego.

Cruise appeared on the tail end of the “Terminator: Dark Fate” panel, another movie from Paramount and Skydance, and said “to me, ‘Top Gun’ is about competition.” In the trailer shown, that sentiment is alive and well, but the battle seems to have moved from a class of fighter pilots to Cruise taking on a changing institution.

“You’re a dinosaur,” a high-ranking official played by Ed Harris tells Cruise’s pilot, now an instructor trying to thrive in a military increasingly reliant on technology.

Originally slated for this year, Paramount pushed the film to 2020 to tinker with its flight sequences. The sequel sees Cruise portray a flight instructor.

“Oblivion” helmer Joe Kosinski is directing the film, a sequel to 1986’s “Top Gun,” from a script by Peter Craig, Justin Marks and Eric Warren Singer. Jerry Bruckheimer, who produced the first movie with the late Don Simpson, will produce with Cruise and Skydance CEO David Ellison.

Jennifer Connelly has a big role, as does Miles Teller who will play Goose’s son and Maverick’s new protege. Goose, the co-pilot to Cruise’s character in the original, was played by Anthony Edwards.

The original film was a massive success, grossing more than $350 million worldwide on a $15 million budget.