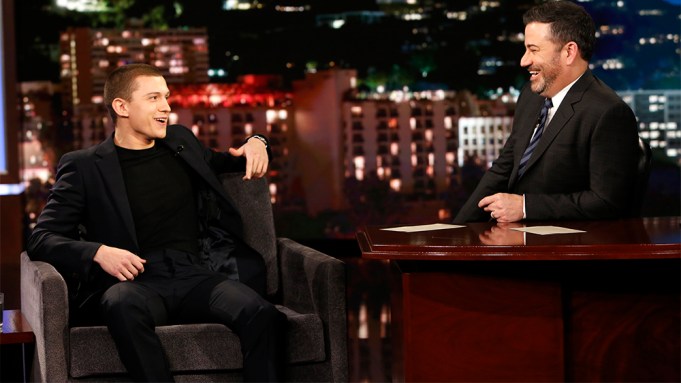 Spider-Man’s involvement in the MCU came under threat earlier this year when rights-owner Sony was seemingly unable to reach an agreement with Marvel to allow the web slinger to continue appearing in Marvel films. The two companies eventually managed to work out their dispute, and it may have been due in part to franchise star Tom Holland.

On Wednesday night’s episode of “Jimmy Kimmel Live,” Holland opened up to Kimmel about a not-completely-sober call between him and Disney CEO Bob Iger, which Iger had told Kimmel about in an earlier interview.

According to Holland, when he found out that Sony might not let Spider-Man remain in the Marvel Cinematic Universe, he asked if he could send Iger an email.

“I just wanted to say thank you, I wanted to say, ‘This has been an amazing five years of my life, thank you for changing my life in the best way, and I hope that we can work together in the future,'” he explained. “I got his email, I sent him the email, and then he responded very quickly saying, ‘I’d love to jump on the phone at some point, when are you free?’ And you don’t give Bob Iger a schedule, you’re like, ‘Whenever, Bob.’

“So like two, three days go by,” he continued. “And then my family and I went to the pub quiz in our local town, and I’m like three pints in, haven’t eaten much and I get a phone call from an unknown number and I have a feeling, I’m like, ‘I think this is Bob Iger…but I’m drunk.’ So my dad’s like, ‘Just take the call, you’ll do fine!'”

Holland joked that he asked Iger a Disney trivia question for the pub game, but then revealed the true contents of the call.

“I basically just said, ‘Thank you for the opportunity,’ and he said, ‘There is a world in which we can make this work’ and then there were a bunch of phone calls back and forth.”

Kimmel asked if Iger’s report that Holland had cried on the phone was true.

“I weeped. No, I didn’t weep — I did, yeah. Yeah, no, I was really emotional because I felt like it was all coming to an end,” Holland said. “We had a really good plan with what we were going to do with Sony, the future of Spider-Man was still really bright, but it would’ve been a shame to take him out of the MCU.”