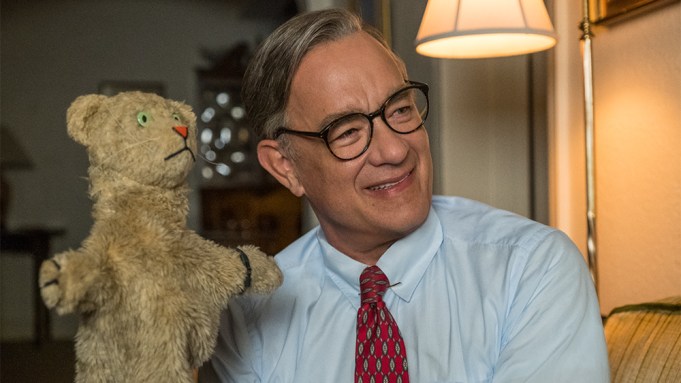 It’s a beautiful day in the neighborhood because Sony debuted the first trailer for its Mister Rogers movie starring Tom Hanks.

“A Beautiful Day in the Neighborhood” is inspired by a real-life friendship between Fred Rogers (Hanks) and Tom Junod (Matthew Rhys), a cynical journalist assigned to write a profile of the long-running television host.

“This piece will be for an issue about heroes,” Rhys’ character tells Rogers in the new clip. “Do you consider yourself a hero?”

He responds, “We are trying to give the world positive ways of dealing with their feelings.”

“There are many things you can do,” Rogers offers up. “You can play all the lowest keys on the piano at the same time.”

The feel-good film highlights the important of kindness in a skeptical world.

“Sometimes we have to ask for help and that’s okay,” Rogers concludes in the trailer. “I think the best thing we can do is to let people know that each one of them is precious.”

Marielle Heller (“Can You Ever Forgive Me?,” “The Diary of a Teenage Girl”) directed the film, which also stars Susan Kelechi Watson and Chris Cooper. Micah Fitzerman-Blue and Noah Harpster wrote the script.

“A Beautiful Day in the Neighborhood” hits theaters Nov. 22.