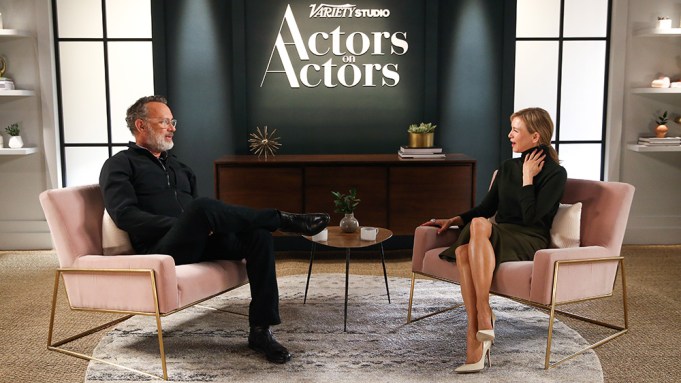 Before Tom Hanks and Renee Zellweger transformed into icons Mr. Rogers and Judy Garland in their films “A Beautiful Day in the Neighborhood” and “Judy,” the two began their awards-filled careers on the small screen.

In a conversation with Zellweger as part of Variety’s Actors on Actors series, Hanks reflected on his first big role on an episode of “The Love Boat.”

“I was on it and for some reason I was cast as an old college fraternity buddy of Gopher who comes on and hits on Julie McCoy. And then, he pretends that they’re – and they almost have a love affair, then they laugh,” he shared. “I drove through the main gates of 20th Century Fox where the set from ‘Hello, Dolly’ was still up and I went on stage 24 or 19 or something like that and I was on the freaking ‘Love Boat.’ When it aired, that night, I can’t tell you what it meant to my world. My fifth grade teacher called me up and said ‘I can’t believe my eyes. Tom, you’re on ‘The Love Boat.’ It was a big deal.”

The actor went on to describe seeing his son cry at the end of the episode.

“He was only like three or four. You know, at the end of ‘The Love Boat,’ it shows it sailing away and the close credits? He started crying and I asked him, ‘why are you crying?’ and he said, ’cause you’re going away on ‘The Love Boat,'” he said. “It was really very sweet.”

On the other hand, Zellweger starred in a series of commercials as some of her first big acting projects. The first big job she’d ever done came from her appearance in a Coors Light commercial where she’s seen rollerblading down a hill carrying a six pack on her shoulder. And, to make it even better, she did it all in a bikini. The actress has surely come a long way, now garnering Oscar buzz for her work in the Judy Garland biopic.