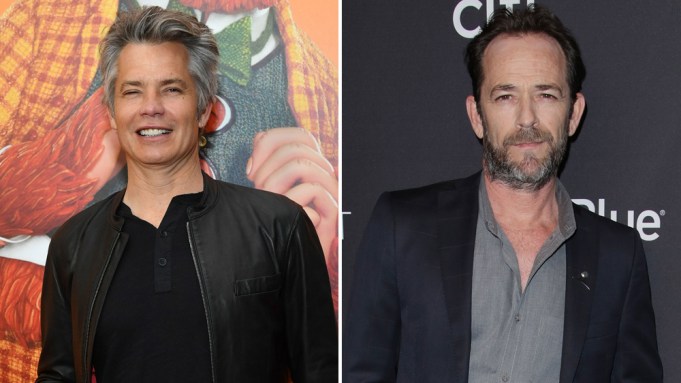 Luke Perry’s last role will be in Quentin Tarantino’s “Once Upon a Time in Hollywood,” and his co-star Timothy Olyphant got a front-row seat to the late actor’s final performance.

Perry, who died this March after suffering a massive stroke, had completed all of his scenes in the upcoming film prior to his sudden death.

“Once Upon a Time in Hollywood,” which hits theaters this summer, stars Brad Pitt and Leonardo DiCaprio as a washed-up actor and his longtime stunt double. The film is set in 1969 Hollywood against the backdrop of the rise of the Charles Manson cult, with Pitt and DiCaprio’s character living next door to Sharon Tate (played by Margot Robbie), the actress famously killed in the Manson murders.

Perry will play the role of real-life actor Wayne Maunder, who co-starred in the late ’60s TV western “Lancer” with actor James Stacy, who will be portrayed by Olyphant.

Given their storylines, Olyphant shared many of his scenes with Perry.

“We just met on the film, but the two of us showed up, and we kept looking at each other like, ‘How’d we get in? I don’t know who let us in, but they let us in,'” Olyphant said with a smile, recalling his time working opposite Perry, calling the Tarantino film a “dream come true.” He continued, “There were so many moments where it just felt like the two of us would look at each other and we both had the same look on our face, which is, ‘Not bad. Here we are.'”

Olyphant said although he and Perry are not particularly close, they spent time together on set talking about their families. He also remembered Perry for his genuine kindness and work ethic.

“I haven’t met anyone who’s ever said a bad thing about the guy, and that was my experience hanging out with him and working with him,” Olyphant said. “He was the best kind of actor. He was a craftsman. He was all about the work. No bulls—. He showed up early and did his work, and we spent most of our time talking about our families and just enjoying the job. Just a lovely guy.”

Perry’s was not the only death to hit “Once Upon a Time in Hollywood.” The late Burt Reynolds was attached to appear in the star-studded film, but hadn’t filmed his scenes prior to his death in September 2018. Bruce Dern replaced Reynolds in his role.