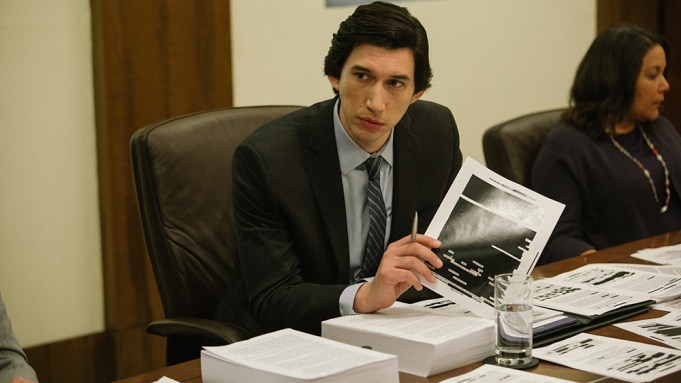 Adam Driver is in pursuit of the truth in Amazon Studio’s first look at “The Report,” a tense political drama about the CIA’s use of torture.

The film focuses on Senate staffer Daniel Jones (Driver), who begins to investigate the CIA’s Detention and Interrogation Program, a group created in the aftermath of 9/11. As he continues to dig, he uncovers horrific realities that the nation’s top intelligence agency has gone through great lengths to destroy.

The trailer picks up in the office of Jones boss, Senator Dianne Feinstein (Annette Bening).

“Have you seen the story today in the New York Times?” she asks, to which an associate replies, “Evidently, the CIA destroyed tapes of interrogations of Al Qaeda detainees.”

“I want to find out what was on the tapes, why they were destroyed,” Feinstein asserts.

With his findings, Jones prepares a lengthy report that mounts evidence against the need for the CIA’s use of torture methods like water-boarding and sensory deprivation.

“The claimed they saved lives, but what they really did was make it impossible to prosecute a mass murderer because if what we did to him ever came out in the court of law, the case is over, the guy planned 9/11,” Jones says.

Adds Feinstein, “We will not allow this to be covered up.”

“The Report” premiered to rave reviews at Sundance, where Amazon bought the film for $14 million. Written and directed by Scott Z. Burns and produced by Steven Soderbergh, “The Report” also stars Jon Hamm, Matthew Rhys and Maura Tierney.

The film will be released in theaters Nov. 15 before hitting Amazon Prime two weeks later.