‘The Mandalorian’: Watch the First Trailer for ‘Star Wars’ Series 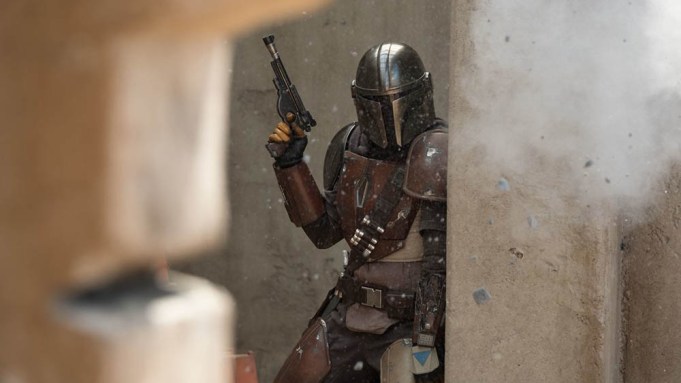 The gunslinging lone warrior — the Mandalorian, as they call him — calls the far reaches of the “Star Wars” galaxy home.

Disney dropped the first trailer for the spinoff series during its biennial D23 convention on Friday, finally giving fans a closer look at the franchise’s newest character. “The Mandalorian” creator Jon Favreau, who was honored earlier on Friday during the D23 Legends presentation, was on hand to give more details on the highly anticipated series.

“I came in and pitched Kathleen Kennedy a version of a show that took place after ‘Return of the Jedi,’ “Favreau said on stage. “Chaos reigns because there’s no central government.”

“It’s a world like the old Samurai movies and Westerns,” he added.

Pedro Pascal stars as the Mandalorian. Pascal joined Favreau on stage at the convention to help debut the trailer, as did Taika Waititi, who serves as one of the directors on the show and voices a droid named IG-11.

“I just want to say that for droid representation, it was very important for me that those characters get enough screen time,” Waititi said on stage. “They’re very misunderstood.”

The new series will take place five years after the events of “Return of the Jedi,” which saw the destruction of the Empire and gave way to the New Republic. Favreau has previously described the titular character as “a citizen of the underworld,” who operates outside the jurisdiction of the New Republic.

“The Mandalorian” will be available for streaming on Disney Plus Nov. 12. Immediately after dropping the highly anticipated trailer, D23 also welcomed Ewan McGregor to the stage to talk about the upcoming Obi-Wan Kenobi series, which will see McGregor reprise the Jedi mentor he played in the prequel series.